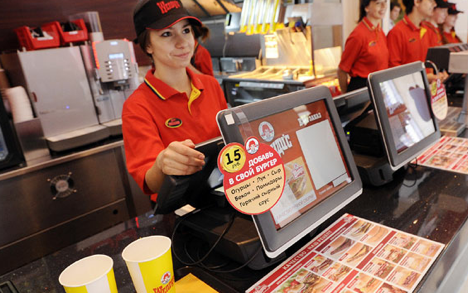 Globalisation has its own share of drawbacks and is not always in the best interests of smaller communities.

It’s quite nauseating to listen to some of my snooty Muscovite friends and colleagues cribbing about how difficult it is going to be to buy gruyere and camembert cheese in the Russian capital as a result of the ban on imported food from the EU. They’re not exactly going to die of hunger from non-consumption of European or North American products. This craving, also evident in India and other parts of Asia, for Western products and systems is a result of an excessive dose of globalisation and an active campaign to dumb down and mentally enslave humanity.

Globalisation is by no means a new phenomenon and influences have been spreading around the world since time immemorial. The spread of religions from the Middle East all across the world is one example of globalisation that started ages ago. However, everything is good within limits.

Without even hinting that Moscow was better off before all the international brands set shop in the city, one has to look objectively at the changes in the way people live in the metropolis. For starters, anyone who has been visiting the city regularly over the last decade would notice that the advent of fast food culture is showing a lot on the waistlines of Muscovites. It’s easy for the snobs to say that ‘new arrivals’ from the regions are the ones who are giving McDonalds a majority of its business, but such remarks would be facetious. Lifestyle diseases that were almost unheard of, a decade and a half ago are rearing their ugly heads in the city. Barack Obama is encouraging Americans to grow food in their backyards, while at the same time, American government officials want more countries to open up to more fast food, TV dinners and genetically modified vegetables.

Ingenious western (read American) systems and ideas are rapidly creating unemployment around the world and killing off small businesses. One has to wonder whether globalisation is actually in the best interests of local communities around the world. In Scandinavia, there is a great emphasis on buying local and supporting the small business community. A growing number of people are even shunning multinational supermarkets and e-commerce sites, even if that means spending a little more.

A degree of de-globalisation as is taking place in Russia may be one of the best things to happen to the country. There is an active encouragement of farmers and small businessmen in the country. Even Russian industry may get a boost having access to a large market. Russia should follow the Scandinavian example in going local. I’d be happier buying produce from Russian farmers than mass produced food from abroad.

A degree of isolation often helps preserve local culture and tradition. I have always maintained that the best places to get a taste of real Russian culture are east of the Urals. Cities like Khabarovsk and Vladivostok (even after its makeover in 2012) can give a visitor a glimpse of Russian life without the international standardisation that is a part and parcel of life around Moscow. The world is boring enough seeing the same brands and trademarks everywhere.  In fact, an excessively globalised world could even be classified as a dystopia. What the big corporates are actually doing in many countries is nothing short of a modern version of colonisation.

It is always good to adopt the kind of global practises that would suit a community, but a standardised world with a populace that is being led (read brainwashed) to consume what it doesn’t need is certainly not in the best interests of the masses. It’s not a good idea to go back to the days of communism in Russia, but then a new path that paves the way for greater participation of the local community in the economy would revive many of the smaller parts of the country. Combine this with eco-friendly measures and there is a winning formula, for everyone except the greedy corporations that mass produce food and other items, compromising on quality and ethics, just for the sake of profits.

There is a growing awareness even in the hotbed of corporate greed that is the United States to encourage local industry and organic farming. It’s time that countries like India and Russia also followed suit and tried to encourage a more sustainable way of life that offers a greater set of benefits for a wider net of people.

Those with ‘special tastes’ that want the best products that the West offers can easily take the first flight available and have their heart’s content.  Europe and North America welcome those with enough cash.

If this ban on imports of western agricultural produce actually creates a boom in domestic food production, Russia will be all the more better for it, whether some snobbish residents of the capital approve or not.