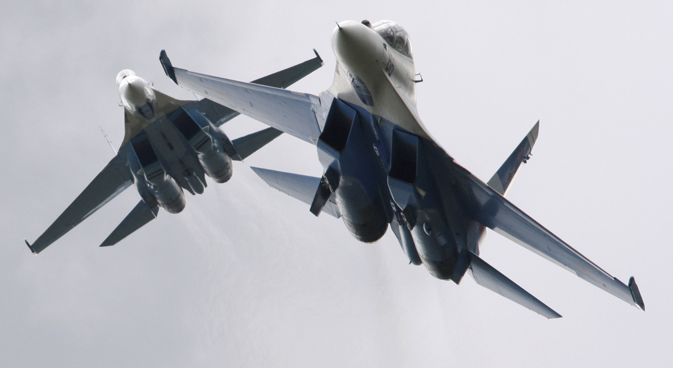 Three decades after it was inducted into the Russian Air Force, the Sukhoi-27 remains the ultimate jet fighter with its super-maneuverability, grace, beauty and sheer power.

In 1984, after seven years of development and test flights, the Sukhoi-27 (codenamed Flanker by NATO) was inducted into the Soviet Air Force and the Soviet Air Defence Force. It was a defining moment in the history of combat aviation as the Su-27 – and its later iterations – became the jet fighter that would shift air superiority decisively away from western air forces.

British fighter pilot John Farlight, who saw Victor Pugachev turn his Flanker 360 degrees in 10 seconds at the 2002 Paris Air Show said in an interview to Nauka I Zhisn (Science & Life) magazine: “What the Russians have achieved has astonished us to the bottom of our souls.”

Developed to counter the American F-15 Eagle, the Su-27 achieved much more, becoming a dogfight duke that ran the competition into the ground. With its range of over 3200 km, ability to fly 2.35 times the speed of sound, and astounding agility – despite its 30 ton weight – the Flanker wowed the masses as well as the world’s aviation experts. Says Farlight: “When you see there are no limits for an Su-27 or that the aircraft can go vertical, stop, slide down and then resume normal flight and perform this not once, not twice but time after time, you realise this is not an exception, not a trick, but a standard.”

When the Su-27 was being designed in the 1970s, the aim was to make it better than any jet fighter the Americans had in their inventory or on the drawing boards – the F-14, F-15, F-16 and the F-18. But when the first prototype flew on May 20, 1977 Sukhoi’s legendary aircraft designer Mikhail Simonov realised it wasn’t as good as the F-15.

At great risk to his career, Simonov mustered the courage to go to the minister of aircraft industry, Ivan Silayev, to tell him the aircraft wasn’t up to scratch and needed more work. Silayev said: “It is a good thing today is not 1937,” implying that had it been Stalin’s Russia, Simonov would have been packed off to the gulag.

By the early eighties, the Russians had developed an aircraft that exceeded the capabilities of the F-15 – but only marginally. This wasn’t enough for Simonov. He didn’t want Russian fighter pilots to be in a dogfight where their opponents had an equal chance of winning. Russian pilots had to have overwhelming superiority.

“We realised in order to obtain a decisive advantage of the opponent our fighter would have to be not just more manoeuvrable but several times more manoeuvrable. In combat the advantage rests with the fighter that is able to turn around before its adversary. We have decided if we are able to make our fighter turn at twice the rate of the opponent, we will call this super-manoeuvrability.”

There would be no compromises: “To make the best plane that can defeat any enemy fighter we need to have the best engine in the world, the best radar, the best missiles in the world and everything else also has to be the best.”

The end result was a fighter of unparalleled performance. During one of its early flights when the Su-27 was chasing down the F-15’s world records, the fighter had to start at full power from a dead stop. To achieve this Su-27 was tied to a tank with a cable. To the astonishment of the observers the aircraft started pulling the tank down the runway. The test crew had to then tie the tank to a bulldozer.

The 25 metric tons of thrust provided by its Lyulka engines rocketed the Su-27 into a vertical climb, breaking the sound barrier. In Simonov’s words, “No other aircraft, not even a space booster can achieve supersonic speed at such low altitude in a vertical climb. Normally this happens only in the upper regions of the atmosphere where air density is very low. However, we could achieve supersonic flight at an altitude of just 2000-3000 metres.”

The Su-27’s unmatched thrust-to-weight ratio and sophisticated control system allowed it to perform exceptional manoeuvres at very low speeds, such as raising its nose and standing on its tail – a stunt called the Pugachev Cobra, although it was first performed by Sukhoi test pilot Igor Volk. In June 1989 Reuters reported from the Paris air show: “Looks like the competition between Soviet and American fighters in the skies of Le Bourget has been won by the Soviet Union. The Russians succeeded thanks to their snake-like aircraft whose promising design and ease of control shocked the experts.”

Super-manoeuvrability is the defining characteristic of the Flanker. Aviation expert Bill Sweetman explains how this can decide the outcome of an air battle: “Unpredictable flight paths challenge the guidance algorithms of any missile system.” Basically, by making the missile work harder the Su-27 effectively reduces its range. At the same time super-manoeuvrability boosts the Flanker’s own missiles. “Rapid nose-pointing can permit a short-range missile launch with a greater kill probability,” writes Sweetman.

One of the little known facts about the Flanker is that its super-manoeuvrability reduces its visibility on radar screens. Simonov explains: “Super-manoeuvrability should be looked at as a system of manoeuvres for close aerial combat. Once the pilot receives a signal that his plane is being tracked by enemy radar, the first thing he needs to do is to go vertical. While gaining altitude and losing speed the aircraft starts to disappear from the screens of radars that use the Doppler effect.

“However, the opponent is no fool either and will counter by pitching his aircraft upward as well. By that time our plane is going vertical and its speed approaches zero. But all Doppler radars can recognise only a moving target. If the aircraft speed is zero or simply low enough to prevent the enemy radar from calculating the Doppler component, for the enemy our aircraft will disappear. He may still be able to track us visually, but he will not be able to launch a radar-guided missile (either active or semi-active), simply because the missile’s seeker would not pick-up the target.”

While the Flanker’s manoeuvrability is legendary, its long range also comes into play in aerial combat. This allows it to perform repeated probes and U-turns – a Cold War Russian tactic – that can leave its opponent disoriented, exhausted and vulnerable in a dogfight.

Another little known aspect of the Su-27 is its spacious cockpit which allows more freedom of movement for the pilot. In fact, in the Su-34 (fighter-bomber version) the cockpit is so massive that the pilot can stand and move about inside during long missions. Test pilot Igor Votintsev’s longest flight lasted 15 hours and 42 minutes.

The Su-27 and its subsequent versions such as the Su-30, Su-34 and Su-35 mark a historic shift in air-power from the United States to Russia and the countries that use Russian defence technology. Whether in India, China, Indonesia or Venezuela, the Flankers have degraded the offensive and defensive capabilities of their western and western-backed opponents.

4++ generation Flankers are also making future western aircraft redundant. In July 2008, at the US Air Force’s Hickam airbase in Hawaii, in a simulated dogfight involving an attack by Russia’s Su-35 against a mixed fleet of American F-22 stealth interceptors, F/A-18 Super Hornets and the latest F-35 stealth fighter, the F-35 was “clubbed like baby seals” by the Super Flanker, adding to the beleaguered stealth fighter’s ongoing troubles.

Simonov summed up perfectly what Russian air superiority fighters have achieved – they play a critical role in international relations by providing “political equilibrium in the world.”