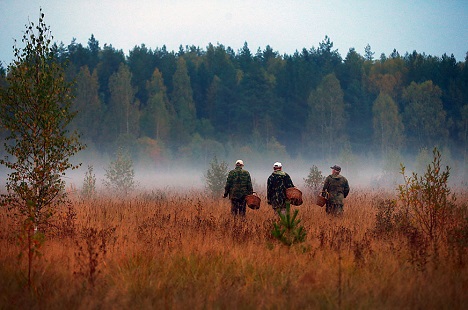 August and early September are the months when Russians reap the rich harvest of a large variety of mushrooms and berries in the forests and fields. Source: Vladimir Smirnov / ITAR-TASS

Sanctions or no sanctions the life in Russia goes on. From the beginning of the 20th century, the people of Russia have been living most of the time either under the conditions of war or sanctions.

It is a usual practice for the members of the media in Russia to go on vacation in August. You miss your favourite programmes and faces of popular commentators holidaying away from Moscow. This year was also not an exception, even on the backdrop of turbulent events in neighbouring Ukraine and the West’s jihad against Putin’s Russia.

So amid the unprecedented mudslinging by the Western media vilifying Russia and its leadership I also took an opportunity to escape to woods away from Moscow to feel the nerve of the Russian hinterland. In these parts, people earn as much in a month as the member of the capital’s ‘office plankton’ (an ordinary office clerk involved in paperwork) spends on an evening in a restaurant serving French wines, seafood and select varieties of cheese and other goodies sourced from the European Union.

After spending my summer in the small villages tucked in the dense woods of Tver and Kaluga regions, where you have unreliable mobile connections and no internet at all, I came back with full confidence that Russia is not going to perish in spite of tightening US and EU sanctions.

The glorious ‘Indian Summer’ in the Russian Far East

I heard about looming disaster from some affluent acquaintances in Moscow, whose lifestyle and pattern of consumption is more like that of a rich foreigner living the Russian capital. Well, they could be right to some extent as Russia’s retaliatory sanctions could hit the import of premium food products consumed by them, like Norwegian salmon, lobsters, parmesan and mozzarella cheese from Italy.

In small towns and villages in the Kaluga and Tver region, shops and markets were loaded with locally grown fresh fruit and vegetables, meat and pure milk products of the highest quality, which one misses in the retail chains in places like Moscow. Even the popular retail chains in their supermarkets in smaller towns sell a large assortment of locally produced food products with labels “Nashe Mestnoe” (our local).

August and early September are the months when Russians reap the rich harvest of a large variety of mushrooms and berries in the forests and fields. It is also the time to make jam and pickle tomatoes and cucumbers with various herbs to brighten the table and ensure the rich dose of vitamins during the long winter months.

So, sanctions or no sanctions the life in Russia goes on, the only difference is that unlike in the Soviet era there was no shortage of sugar for making jams and glass jars with airtight lids to preserve them.

With my long exposure to life in the Soviet Union, I can say that from the beginning of the 20th century, the people of Russia have been living most of the time either under the conditions of war or sanctions.

After almost two months of punctuated watching of the TV and news websites in the hinterland the first thing I saw on the ‘idiot box’ on my return to Moscow was the live telecast of simultaneous ratification of EU- Ukraine agreement on deeper economic integration in their parliaments.

Ukrainian President Petro Poroshenko said that it marks the accomplishment of the Ukraine’s European dream. This reminds me of the early Russian liberals, who insisted on the disbandment of USSR, because without Ukraine it would lose its European identity. To preserve its European identity President Boris Yeltsin’s Russia had detached the coaches of Central Asian ‘stans’ from the Soviet train.

Perhaps Ukraine will pay the price of belonging to Europe by losing its eastern parts identified with the Russian-Eurasian civilization.