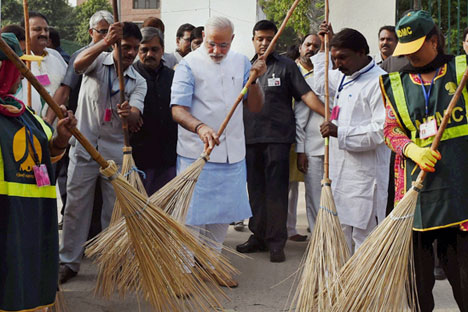 The only way to clean cities in countries where the municipal authorities are incompetent is to hire professional companies, and hold them accountable.

One of the biggest complaints that outsiders (Russians included) who visit India have is that the country is appallingly dirty. The VIP areas are spared of much of the filth that the average Indian has to put up with, since the municipal authorities of urban India make sure they clean the areas where the rich and powerful live. The country’s most powerful man has taken notice. I really appreciate the fact that Prime Minister Narendra Modi repeatedly talks about making the country clean. It’s no easy task, but political will can set the ball rolling and turn into a movement that transforms India.

Many Indians and foreigners point out that a casteist mindset is one the largest impediments to India being cleaner. I agree that the Caste System is evil and the way it is being practised, especially in rural India where manual scavenging is still prevalent, is a disgrace. However it would be an oversimplification to blame the country’s urban filth on the system.

The world over, nobody likes to do the dirty work. The big cities of central Russia now rely on imported labour from former Soviet countries to clean the streets. Many private firms also have janitors from Central Asia, since an educated Russian is not exactly eager to take up a ‘menial’ job. The main cities in the Russian Far East rely on citizens of neighbouring China. In Khabarovsk, Chinese workers are bussed into town to clean the streets for as little as 5000 roubles a month (around $125) and housed in a project away from the city. These workers also get subsidised food under the arrangement and are never seen in the city when they’re not on duty. Yuzhno-Sakhalinsk has a similar arrangement.

Attitudes towards cleaning the streets are more or less the same in post-Soviet Russia, as they are in India. I am pretty sure that none of my colleagues and friends in Moscow ever take part in a public spring cleaning ritual called subotnik. This doesn’t make them casteist. The fact is that the world has a new class system in place and the educated among us will not get our hands dirty.  It’s the same in Western Europe, where immigrants take up the jobs that no local will.

In my locality in suburban Mumbai, it’s not just the ‘poor’ and ‘uneducated’ that litter. Middle class college students throw wrappers of chocolates, chips and sundry food items on the streets. When I come across such people, I force them to pick up their litter and put it in a nearby garbage can. I feel I have the right to do this in my hometown, but I don’t really bother when I’m overseas. The only times I lost my cool with litterbugs in Russia was when I was in the wild. I couldn’t stand it when some urban revellers camped by the warm lakes of Sakhalin in the summer and then left cans, alcohol bottles and assorted junk behind. Each time someone threw some garbage in a forest, I took strong exception. Once an aggressive man asked me if people didn’t litter in the forests in my country and I reminded him that we were in Russia and if he was as much of a patriot as he was trying to show himself to be, he would respect the country’s great outdoors.

Every country has its share of uncultured citizens. The difference between India and more developed countries is the fact that civic authorities in the latter do their job, causing people to generally have less of an inclination to litter in the cleaner surroundings. The new metro in Mumbai is spotlessly clean and since a private company operates the system, they ensure the stations are maintained to perfection. Commuters also take a lot of pride in the new mass transit system and for the most part display the kind of civic sense that you won’t see elsewhere in the city.

It’s a given that municipal corporations across India are not going to bother doing their jobs, except in the enclaves where politicians live. The only solution is to privatise the whole process of cleaning the streets, collecting the garbage and recycling. The private companies could pay decent wages and benefits to cleaners. Malls in India have managed to do that and they stay absolutely clean. If private companies can keep pockets of cities clean, they can be entrusted to handle entire cities. Of course, they need to be held accountable for their jobs. Like in Russia and Europe, there will still be the litterbugs, but people are going to be a lot less inclined to dirty a clean and well-maintained neighbourhood in India.

Singapore’s ‘fine and cane’ system of maintaining cleanliness has won a lot of admirers across the world. This may have been the only way for the city-state, but could such a system possibly be successful in places like India and Russia? I would think not.