Bear’s revenge: What happens if Russia shuts off the gas 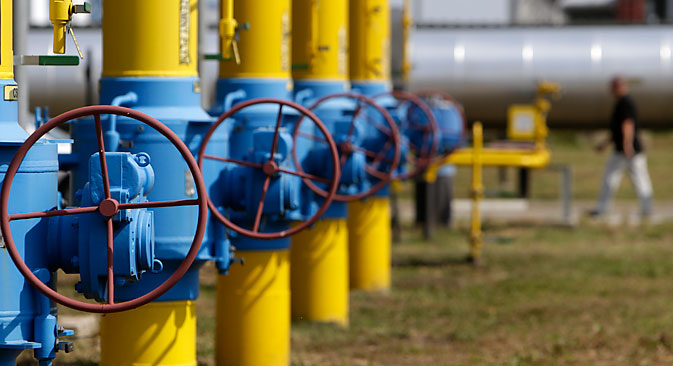 If Russia shuts down the pipelines, Europeans will freeze. Source: Reuters

A “stress test” conducted by the EU shows that if Moscow shuts off the gas pipelines that pass through Ukraine, it would send the European economy into a deep freeze.

One should never corner a bear. Unfortunately, that’s what western governments are attempting to do with Russia. Besides being myopic, it seems the West also has a death wish. For, not only is the Russian economic crisis making its impact felt around the world (remember we are living in a globalised economy) but trying to destroy the Russian economy could invite a fierce backlash from Moscow.

World War II happened for a variety reasons; one of them being the attempt by the US to choke the Japanese economy and the second was the massive reparations imposed on defeated Germany after World War I. You get the picture – humiliation and economic strangulation are enough for any country to go to war.

Let’s say things get so bad that Russia feels cornered and decides on a desperate everything-or-nothing gambit. It could, for instance, stop deliveries of natural gas to Europe in order to ratchet up the crisis and force the West to come to the negotiating table.

Unlike the West, Russia has never resorted to economic blackmail and is unlikely to turn off the gas spigot, but then desperate times may require desperate measures. The question is how effective will that weapon be.

A "stress test" conducted by the European Commission in August 2014 to find out the resilience of the EU’s energy system to a potential crisis in winter brings grim news for Europe: if Russia shuts down the pipelines, Europeans will freeze.

The report was so alarming that it was kept away from the European Parliament for nearly three months. The analysis examines, among other things, how the European economy would cope if Russia blocked gas deliveries from September 2014 to February 2015.

The report focuses on Germany as it is Europe’s largest economy. If Russia suddenly turned off the pipelines, it would reduce natural gas supply by 23 billion cubic metres – that’s almost half of Germany’s total consumption of 51.2 billion cubic metres. Only a small part of the missing Russian supplies could be compensated from other sources:

So that’s less than six billion cubic metres of emergency diversions to meet a shortfall of 23 billion cubic metres. The situation will be so dire that Germany will have to declare a nationwide “power emergency” so the federal government can determine who gets gas. The following four groups would be served in descending order:

Russia is forging its own ‘Ostpolitik’

Again, that’s in a best case scenario. In reality, “it is technically difficult in a distribution network to separate protected customers from non-protected customers.” Households that should be getting gas might well run out as their gas would be used elsewhere.

Basically, it would be an apocalyptic situation. “Industry would lose much of its electricity as power plants that aren’t deemed indispensable would have to shut down,” says petroleum industry analyst Wolf Richter. “Forget heating those manufacturing plants, or turning on the lights, or booting up the robots…. Production would plunge. Layoffs would soar. The supply chain would collapse. A cut in gas supply would generate enormous economic costs. And even the lucky ones who would get gas would have to deal with dizzying price spikes.”

And while the move would be self-destructive for Russia, it could lay waste to Germany’s industrial power. Richter says, “It would wreak havoc that would then ricochet around the world as German export orders would remain unfilled, and as imports would grind to a halt. The costs would simply be too large to contemplate.”

Across the Atlantic, the US warmongers are patting themselves on their back for having beaten down the price of oil and having mauled the Russian bear. But here’s the rub. The fall in oil prices will maul the US too.

Here’s how. US energy imports are currently at their lowest since the 1960s on the back of the shale oil boom. American motorists are delighted with lower prices at the petrol pump. But the shale oil industry was built on massive borrowings – we are talking junk bonds – and consequently the industry’s oxygen is high oil prices. Most of these hundreds of shale oil projects – and ancillary industries – were greenlighted when oil was hovering at $110 a barrel. Even at $80 the industry kept investing billions of dollars, hoping prices would climb back. However, $50 is shale oil’s Hiroshima.

“A $50-per-barrel drop, if maintained on average in 2015, which is entirely possible, would send much of the junk debt into default,” says Richter. “It would strangle the flow of new money into the industry, a process that has already begun. If the money stops flowing, drilling projects will be cut. Many outfits would topple because they could no longer service their enormous debts. Much of this debt would blow up. Equity would be transferred from existing stockholders to creditors. Oil bust mayhem would spread in this all-American industry that has played such an outsized role in the otherwise crummy US recovery.”

The shale oil industry is so big that if goes bust, it will take the American economy with it.

And if the Russians time their apocalyptic move with the shale implosion, then all bets are off the global economy. For better or worse, we’re all in this together.