From Moscow to Monte Carlo: On the way to the Golden Clown 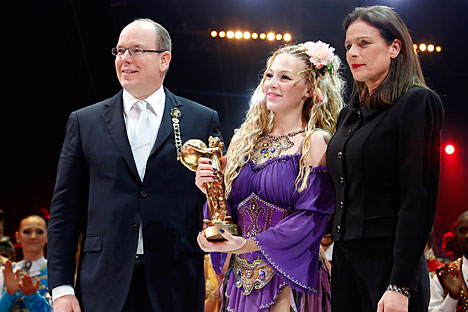 Russian artist Anastasia Fedotova-Stykan (center) with Prince Albert II of Monaco and his sister Princess Stephanie of Monaco after receiving a Golden Clown during the Award Gala evening of the 39th Monte Carlo International Circus Festival, on Jan. 20. Source: AP

In the world of circus, the Monte Carlo International Circus Festival is the yardstick by which the globe’s top performers are measured. This year the event was dominated by Russian performer Anastasia Fedotova-Stykan and her equestrian act.

Every year in January, the city of Monte Carlo in Monaco lights up with the best circus acts in the world. The Monte Carlo International Circus Festival, now in its 39th year, invites the top circus performers from around the globe to strut their stuff in front of an international jury, to vie for the Golden Clown, otherwise known as first place, making them the best in the world for every given year. Even though more than one act can win the Golden Clown, it’s still an award that is difficult to obtain and an honor beyond words. This year, yet again, another Russian act took home the top honors.

While there are many circus festivals around the globe, including in China and Russia, each year, Monte Carlo is a place to see and be seen, and boasts the best of the best, the most prestigious. Agents flock to the event in droves in search of top talent, to invite the leading acts to come work for them the following season. The festival is overseen by an international jury, which is headed up by Monaco’s Prince Albert II and his sister Princess Stephanie.

Anastasia Fedotova-Stykan and her two-horse act participated in all 10 days of the festival, from Jan. 15 to Jan. 25, both in competition, where she won a Golden Clown, and in specialty awards shows, where the public came to watch the winners.

Fedotova-Stykan is one of Russia’s top horse trainers, and her steeds displayed all kinds of tricks in just a few minutes. Although the tricks were not as complicated as you would have thought, it was a nice act, for sure - clean, pleasant choreography that matched the music perfectly - and her horses were impeccably trained.

In my mind it wasn’t the best horse act I’ve ever seen, but for this day and age, when large animal acts are not always in vogue, it was a performance well done. The judges obviously disagreed with me, for she took home the top award, and congratulations is all I can say.

I’ve seen several Russian acts that went on to win the Golden Clown. Back in 1995, the “Flying Cranes” trapeze act was the talk of the town. That act took five years to build and was considered the best trapeze act in circus history.

The Flying Cranes act was about World War II and a famous Russian film that portrayed dead soldiers turning into flying white cranes after they died [Mikhail Kalatozov’s Letyat Zhuravli, or “The Cranes are Flying” – RBTH].

I saw them first on their North American tour in 1990, when their act garnered wide national media attention in the U.S. as much as for their complicated tricks as for their expansive choreography that told this story of flying cranes.

The cube contortion act by the Seyranyan sisters gained much attention in 2013, then the following year it was the act called “Desire of Flight” performed by Malvina Abakarova and Valeri Sychev in 2014.  The judges look at the quality of the tricks, the costume, choreography - in essence, the entire act, not just the tricks or the costumes or just the music or make-up.

But it’s not just them. It’s everything else, it’s an act these days that tells a story, about romance or something else, it’s the ability to carry out the tricks and perform with no mistakes, it’s the unique nature of the performance, something that no one else has done, and many other things.

Hail to the circus photographers!

Circus is a complex performance and so many things go into making a great act. One thing they have in common is that the performers have practiced for thousands of hours. Many of the winners were born into circus families and have been performing since they were little.

The performers at Monte Carlo are not newbies, and they’ve all been in showbiz for many years, often their entire life. They are seasoned performers, professionals, and much like the Olympic athletes they compare themselves to, they’ve been at it for eons.

It’s well worth going to the Monte Carlo festival website, going through a list of the winners, and looking their acts up on YouTube. You not only won’t be disappointed. You’ll see the best the circus world has to offer.