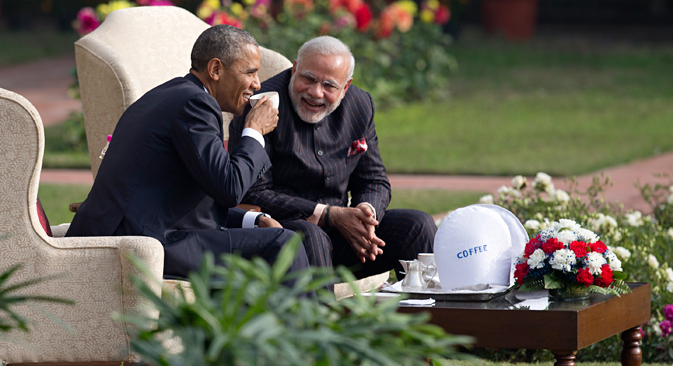 President Barack Obama and Indian Prime Minister Narendra Modi have coffee and tea in the gardens of the Hyderabad House in New Delhi on Jan. 25, 2015. Source: AP

The Modi-Obama Republic Day romance won’t last as India’s relationship with the US does not have the kind of strategic dimension and weight that marks New Delhi’s ties with Moscow.

Russia is a country with which India has had a strategic relationship for decades. America is a place where Indians migrate to for a better lifestyle. That is how Indians view the world’s two leading powers. It’s as simple as that. US President Barrack Obama’s recent visit to India will not change that reality, and those speculating about dramatic changes in India's foreign policy are either fools or amateurs – or both.

“Good relations with the US reflect aspiration, ties with Russia are hard reality,” says Bharat Karnad, professor of national security studies at the Centre for Policy Research. “No substantive shift in policy is on the anvil, certainly nothing at the expense of India's relations with Moscow, especially because, unlike the US, Russia has partnered, and continues to partner, India in strategically sensitive technology projects ranging from missiles, ship submersibles, ballistic, nuclear submarines to the Fifth Generation Fighter Aircraft,” he explains.

Many US presidents have visited India. Likewise, Indian prime ministers have visited America. But the dynamics of the India-US relationship hasn’t changed much. And why would it? The US is the leader of the western world whose prosperity largely rests on the domination of the rest of the world. India, on the other hand, is a member of the BRICS (Brazil, Russia, India, China and South Africa) grouping that aims to end such dominance and exploitation.

So the question arises – why did Prime Minister Narendra Modi and Obama hastily arrange this Republic Day romance? The US position is easy to figure out. Having banned Modi from entering the country for a decade – a decision the Americans arrived at because of intense lobbying by Indian leftists, Indian Christians, American evangelical groups and Indian Muslim organisations – the US wanted to get into the newly elected and highly popular leader’s good books. You don’t remain on not speaking terms with the leader of the world’s second most populous country at a time when the most populated country (China) and the country with the most nuclear bombs (Russia) are becoming close friends.

Modi’s reason to forgive and forget the snub – which rankles every patriotic Indian – cannot be explained by the Hindu philosophy of the “guest is god”. Modi is too hardnosed for that kind of claptrap. It’s got to do with the fact that had Modi’s relationship with the US not thawed quickly after becoming prime minister, then taking its cue from the US the rest of the world, too, would have continued to treat him as an untouchable.

The Indian media would have willingly done their masters' bidding and gone after Modi. The CIA plants would have once again raked up false stories about Modi’s involvement in the 2002 anti-Muslim riots. That Indian courts have cleared him does not matter to these anti-national elements. Essentially, it was internal politics that forced the new prime minister to invite Obama to the parade.

There is another key reason why an India-US romance is like spring in the Tundra – the Americans meddle in India's internal affairs and the Russians do not.

On January 27, hours before boarding his flight to Saudi Arabia, Obama walked into territory he had no business to be. “Every person has the right to practice their faith, how they choose or to practice no faith at all, and to do so free from persecution and fear,” he preached to an audience of young Indians.

Obama was, of course, referring to the ruling BJP’s programme to reconvert Indian Muslims and Christians to Hinduism. It is no doubt a controversial issue but the US has absolutely no locus standi in the matter. Having almost annihilated the Native American race and ghettoised its black population, the US has no moral legitimacy left. In fact, wouldn’t it be great if Obama spoke about religious tolerance in Saudi Arabia as well. But no US president ever does that. Clearly, such sermonising is directed at soft states such as India.

Also, it was extremely churlish of a head of state to offer such a parting shot after enjoying Indian hospitality and adulation. Russian President Vladimir Putin has visited India a number of times but when was the last time he embarrassed his hosts like the Americans did?

Obama’s parting shot is no trivial issue. N.V. Subramanian, editor, Newsinsight, says: “It is traced to the US’ new ambassador to India, Richard Verma, who prompted its inclusion in the presidential speech likely at the instigation of US embassy staffers who were part of the earlier campaign against Prime Minister Narendra Modi. The government has taken this protocol deviation in stride.”

Plus, the fact that Obama raised the touchy subject during a trip meant to build bridges is a pointer to the pressure the US leadership is under from American churches to press forward the case for the wholesale conversion of Indians to a particularly virulent form of evangelical Christianity. The danger for India is that these churches are directly connected with Indian Christian groups.

Every time a US leader visits India, the media goes into a frenzy about how the visit is going to reshape the India-US relations. One tends to forget that such visits in the past had not produced much. Remember Jimmy Carter? When that lameduck American president visited India in 1978 the government renamed a village in Haryana after him. Whether Carterpuri is still around or has reverted to being Daulatpur Nasirabad is irrelevant, but after Ronald Reagan replaced Carter, India's relationship with the US nosedived.

This time there was thankfully no Obamapuri. But the clueless media has been speculating whether New Delhi’s relations with Washington will acquire a strategic edge. The editor of an Indian magazine told this writer that he had come to know from Indian government sources that the Obama administration would offer India the F-35 stealth fighter and perhaps even the F-22. He was politely told that India has no use for the failed F-35 and that the US law bans the export of the F-22 stealth interceptor. Besides, India is jointly developing with Russia the Fifth Generation Fighter Aircraft that is likely to be superior to the two American jets.

The reality is Indian military equipment will continue to be heavily Russia-centric. As well as stealth fighters, India and Russia are working together on high-octane weapons projects such as the Arihant nuclear submarine and BrahMos supersonic cruise missile. Then there’s the much feared Akula class nuclear attack submarine that Moscow has leased to the Indian Navy. A second strategic submarine is expected to be leased soon. As Russian ambassador Alexander Kadakin says, no country except Russia will offer a nuclear submarine to India.

And for those ‘experts’ who predicted a massive influx of American military technology into India’s manufacturing sector, here’s news – the US is offering the technology for developing a drone. Yes, they are throwing us a toy.

Unfortunately, no Indian takes offence to it. On the contrary, they seem to love it. This is exactly what the West wants – to box India in the peaceful category and emasculate its warlike spirit. If Indians remain peaceniks, then it would be easier for the West to penetrate it yet again. Obama is sticking to that tired old script.