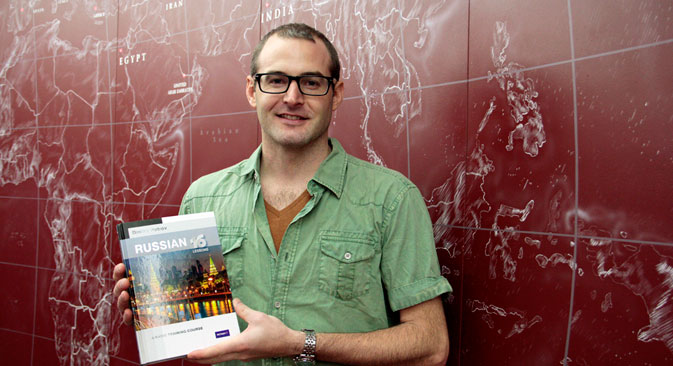 What are the top reasons RBTH readers are studying Russian?

Last week we organized a little Facebook contest to give our readers the opportunity to win a couple of Russian language self-study books. We asked readers only one question – why do you want to learn Russian?

We would like to thank everybody who took part in this contest and wish them the best of luck in learning our beautiful but difficult language.  Our winners will get one copy of the amazing Russian grammar book by renowned polyglot Dmitry Petrov very soon (already packed and sent). Yes, we promised to give away only two books but we received such a warm response and so many letters from all around the world – that we had to find two additional books – and one winner has already got it!

We appeal to all other readers not to get too down  – we’ll do our best to provide you with interesting language education materials and we’ll try to hold contests again in the near future.

Our readers have allowed us to publish their answers and here are some of the reasons our readers want to study Russian:

Jennifer:“Today, I saw the RBTH posting on Facebook to win two self-study Russian grammar books. Please, select me as an entry winner because (1) I would love to be able to sign along with the songs that Stas Mikhailov posts on youtube, and (2) it would be nice to get a package - it moves the economy and I would like to see the stamps!”

By the way, do you know that Stas Mikhailov is one of the most popular Russian chanson singers? We were really impressed that he is also known abroad!

Candace:“I am very interested in learning Russian before I visit Russia in 2016.  My husband is taking me there for our 25th wedding anniversary because he knows I have wanted to visit Russia since I was a little girl. I have always love the culture, the people, the architecture and the wonderful food. I would love to be fluent enough to truly enjoy this trip that I have waited for, for many years.”

Phil: “I want to learn (or as will become clear - vastly improve) Russian so I can try to decipher my wife's calendar. Not because I am a control freak but because she writes everything on it (i.e. appointments and such) and then expects me to know what is going on (and everybody knows Russian cursive is a code in itself)! If I get it wrong she proceeds to tell me off in Russian ... Then tells her mum; who calls all the women in the family who all then give me earache. Help me! Aghh! Also, our beautiful two year old is crazy for Masha and Bear and I want to be able to follow the cartoons with her.”

Yes, this reason was really supported by all our men in the office!

Paola:“It is my desire to understand and to see the world through the eyes of the Russian culture. The only way it could happens to someone who feels and experiment life through the languages is clearly by learning languages.”

Jessy:“Russia has a rich culture that is much undervalued in the US- we tend to let the rocky history overshadow all that she has to offer. I recently found out my great-great grandfather served in the Tsar's Imperial Army. I have it in my blood! I would love the opportunity of getting these books so I can make my ancestors proud”.

Dear Thomas, your Russian is not as bad as you think! Moreover, your bride must be proud of you!

Agata:“I used to learn Russian when I was about eleven. I had to. These were specific times. Russian was obligatory and eveyone was moaning on that. I like it. My parents spoke it. Now, after years I am fluent in two other languages, Western, and it feels I am missing something. Why the heck I gave it up? It is our neighbour and demonized now, but as much as I hate politics I love new languages, new cultures, espcially close to ours. I want to revoke my Russian to be able to read and lister and communicate without a filter of translation.”

Incognito:“After I have attended some Russian classes at school I start studying Russian with almost 30 years of age again now again. I met a beautiful Russian girl from Kazan at the Winter Games in Sochi and we fell in love. The progress in my Russian class is not very fast. But I would like to ask her parents soon if they let me marry her. In Russian!”

Jamie:“I want to learn Russian because I have a very dear friend who just immigrated to Halifax, Canada, and I would love to speak to her in her mother tongue. Her name is Ksusha and we talked about how Russian has beautiful words that don't translate into English. I'd love to know her stories and not lose these words in translation.”

Daniela: “Since I can remember, my life has been filled with books from Russian authors, a passion that I have since I was a child. For exemple, my favorite fairy tale from my childhood is Twelve Months, by Marshak, and I have always been enchanted by Slavic culture. Later on, it came all those great writers, as Dostoyevski, Gogol, Tolstoi, and many others which I would love to read originally in Russian someday. Nowadays, my PhD is on Russia politics, and I have been studied the language a lot. These books will surely help me learn more not only the language, but to truly understand Russia through it. I have no direct connection to Russia through my ancestors, but luckily its literature and culture early on appeared in my life. I hope I will be as lucky to win the books!”

Anna:“I am the matushka at a small Russian Orthodox Church in Columbia, South Carolina, USA. One of our parishioners is an 83 year-old babushka, who knows only one phrase in English: "I love you." She taught me my first phrase in Russian: "Я тебя люблю" several years ago. Since then I have tried to learn more Russian so I can converse with her, but unfortunately I haven't found the right self-study program to get me beyond anything but simple discussions about food! Give  her a little vodka and she will cry and sing the most pathetic-sounding songs you could ever imagine. She has such a beautiful soul--and I just want to sing along!”

Payont:“A Russian friend whom I recently met gave me a collection of songs that are most loved in Russia before she went back to Moscow.  A couple of my favorite songs from the collection included "The Last Poem" composed by Alexey Rybnikov and "Thank You, Darling" sung by M. Boyarsky. I would love to be able to learn Russian and have greater appreciation of these 2 songs, so that one day I will be able surprise my friend and show her my appreciation of our friendship by singing these two songs to her in Moscow.”

And finally - the winners:

Domingo (Spain): “My wife and myself are adopting two children from Russia (nowadays, Duma is going to ratify the treaty between Russia and Spain about the issue). We think we'll need more than just few words for the best understanding between us and our children, so, we are learning Russian and the books would be helpful to us.”

Jonathan (UK): “I've begun teaching myself basic Russian via the internet. However, the book by Mr Petrov would help me greatly in achieving my aim of being able to :

Erwin (Indonesia): “I want to learn Russian because I want to be one of the volunteers at the 2018 World Cup which will be held in Russia. Russian language will definitely be a top of priority. However, long before I wanted to be a volunteer at the World Cup, I had "fallen in love" with Russia, especially Russian. About 1 year ago I have started an intensive self-taught Russian language learning to this day, although not as intensive as it once was. I've been able to read and write in Russian like for 70%. Teaching materials that I use very little and limited. I get a lot of teaching materials over the Internet. Teaching materials such as books and dictionaries are very difficult to obtain in Indonesia. And due to lack of teaching materials, I always have ups and downs in learning Russian.”

An honorary award goes to Tim (Australia), you’ll see why.

“I am Australian and came to Moscow 3 years ago.

I had no friends or family. I was only given somewhere to live when I stopped overnight in Singapore. And only arrived with $200 US and the promise of a job in a school.

Fast forward to now and I have worked with Russian families and kids, schools, a kindergarten, and even will be appearing in a Russian TV serial.

I want to live here always, I love Russia, but the language is so hard to learn. I will even personally come to your office and collect one if it is possible.”

And what is your reason for learning Russian?