Love is in the air… or at least, the postbox 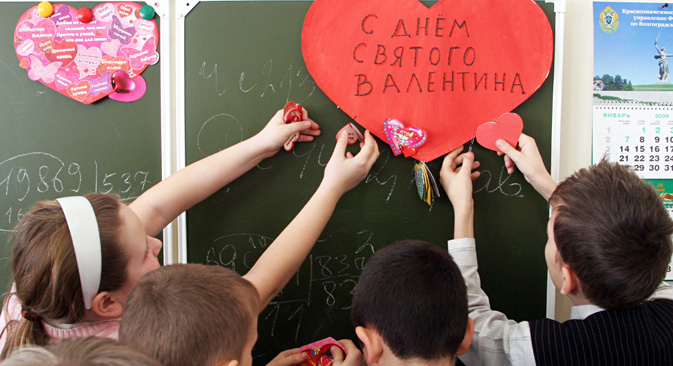 Elena Bobrova: "If a holiday celebrates such a great feeling as love, it shouldn’t matter where its origins lie"

I don’t remember exactly when I found out about St. Valentine’s Day. I think it was in middle school (when I was 9-12 years old) during English language class. It was part of learning about American and British traditions.

But my most vivid memories of St. Valentine’s Day are connected with my last year of school. Each year for Valentine’s Day, the school had a special postbox that let you anonymously send a card to anyone in the school.

I remember I got a card from my classmate Zhenya (he signed it) – it was well written, more like in the style of a friend, but full of admiration. I was just pleased and thanked the guy, thinking that it was very polite and nice on his part.

Only at the end of May did I realize that he was actually in love with me! We were going home after school, feeding ducks at the canal, talking, joking, laughing and at this time I thought: “Oh, actually Zhenya is really sweet and I like him.” We were together for about two years, and he was always amazed that I understood nothing from his Valentine – considering him only as a friend for four months.

One year when we were together, we agreed not to celebrate St. Valentine’s Day – but in the end I was angry that he did nothing for that day. It’s always a dilemma, because on the one hand you don’t want to be forced to celebrate, but if your boyfriend does nothing on this day and you see girls with flowers and presents, you really envy them.

Recently I had a funny conversation with two good friends. Both of them are married – one for three years and the other just four months. I was coming home to St. Petersburg for the weekend and suggested that we meet on Feb. 14, since I am not in town so often.

The one friend said: “But it’s the day of lovers! Maybe my husband would like to celebrate!”

The other sarcastically commented: “Yes, of lovers, but not of married people, because love disappears as soon as you get a stamp in your passport. But we don’t need a special day, we celebrate our love every day.”

I often hear claims that St. Valentine’s isn’t a Russian traditional holiday and we need to celebrate only the Day of Family, Love and Faithfulness on July 8 (which is devoted to the 13th century couple St. Peter and St. Fevronia, who were later canonized and made the patron saints of marriage and family). Some people have even said that St. Valentine’s Day should be banned in Russia, but I disagree. If a holiday celebrates such a great feeling as love, it shouldn’t matter where its origins lie.

A large ballroom. It’s dark and a bit stuffy. There is a huge box with a slot standing on the stage. Hundreds of boys and girls are standing by the wall, shyly whispering to each other and pretending that they are absolutely not interested in anything going on at all. The school director announces from the stage: “Well, now we’ll find out who’s got the most valentinki” and then began to remove cards from the box, each time calling out the name of the lucky schoolboy or girl to whom it was addressed.

Usually, it was the most popular guys in school who received the most cards. But if for the girls it was a chance to confess their true love, boys rarely took it seriously. After they received the cards, you could often see them reading them and laughing.  It was rather hurtful.

The most awful thing was if you didn’t get a valentinka at all. Some girls cried. But most girls sent cards to each other. If a girl got a valentinka, it meant that somebody liked you, even if it was your friend. And to be honest, there were not many girls who got cards from boys. You know, in every class there’s a special type of girl that is popular among boys. And they always seem to others to be the most attractive and smart, even if they’re not. These girls are the most liked by the boys in their class and are the most envied by other girls. These girls usually received cards. After all the valentinki found their recipients, the discoteka began.

And of course, the situation was the same – the boys danced with the popular girls, while the other girls usually stood around. Sometimes they would dance with each other.

Although many years have passed since that time, I still get valentinki from my friends – girls send text messages or cards or post funny pictures on my Facebook page. Men don’t take Valentine’s Day seriously here, but it’s not a big deal. Russian women can wait - March 8 is just around the corner.

Lara McCoy: "I never feared not getting Valentines"

Valentine’s Day…. a holiday like so many in America of perpetual one-upsmanship. As a child, I remember being afraid that I would choose Valentines with the wrong cartoon character or type of candy attached or that my classmates would make fun of my desktop Valentine mailbox (I distinctly remember making one in third grade shaped like an elephant with hearts for ears).

But I never feared not getting Valentines. Little American children of course can’t handle any kind of perceived disappointment, like not getting the same number of Valentines as everyone else, so all of us always had to bring one for each member of the class. Fortunately, this was in the days before Pinterest. 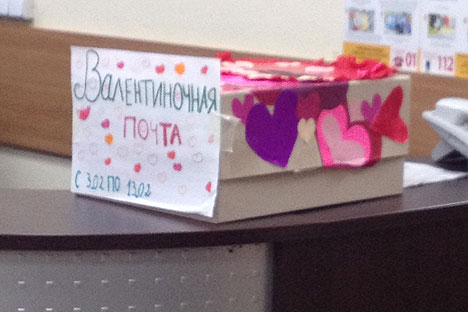 I am thrilled that my children are in a Russian school that keeps one Valentine box for the whole school and if you get a letter, fine, but if you don’t – well, maybe next year. Otherwise they would have to suffer the shame of having a mother who has possibly never entered a craft store.

Growing up in America, Valentine's Day was always a semi-big deal in school. It was elementary school - basically a time when boys thought girls had cooties and vice versa.

So although Valentine's Day would always feel a bit forced, in the end all boys and girls had a smile on their face when they received some kind of cute Hallmark card from their secret or not-so-secret Valentines. And of course cupcakes. Yummy pink cupcakes with little heart-shaped sprinkles on them were considered the best remedy for cooties.