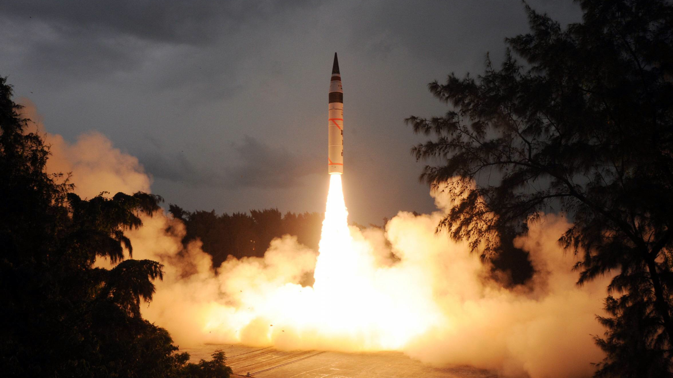 In a giant leap for India’s deterrence capability, the country recently conducted the third consecutive successful launch of the Agni V strategic missile. Road mobile strategic missiles were developed by Russia because they are more survivable but considering the security environment in South Asia, it could be a risky option.

With the third consecutive successful launch of the Agni V strategic missile, India is on the cusp of attaining strategic deterrence. This is the big boys club where you have enough missiles for a devastating second strike after suffering a full-on nuclear attack.

The aspect of the missile that will keep the Chinese – among others – awake at night is that it was cold launched from a hermetically sealed canister mounted on a tractor-erector-launcher (TEL). “Launch from a canister integrated with a TEL enables launch in minutes as compared with a silo – or open – launch. It also has advantages of higher reliability, longer shelf life, less maintenance and enhanced mobility,” says the Defence Research & Development Organisation (DRDO).

A mobile system will allow India to keep the Agni Vs constantly moving along its road network. They can also be hidden off the road, in secret bunkers or forests, thereby keeping the enemy guessing all the time. Throw in several dozen dummy canisters and trucks, and you add more uncertainty about the exact whereabouts of the real Agni V missiles.

Russia was the first country to develop road and rail mobile ICBMs. Whereas America has its nuclear triad (silo-based, submarine-based and air-launched nuclear weapons), Russia has a four-pronged approach with its land mobile ICBMs.

“By dispersing a portion of its land-based nuclear arsenal throughout its great wilderness, Russia makes it very hard for the US to hit all of its nuclear emplacements during a 'first strike' scenario,” says the military website Foxtrot Alpha. “This greatly enhances Russia's land-based nuclear arsenal's deterrence factor. Just the threat of a second-strike ability, not just from Russia's SSBN submarine force that America works very hard to track, but from road-mobile ICBMs, and very capable ones at that, makes Mutually Assured Destruction (MAD) a continuing reality.”

By 1991 Russia had 56 rail-based RS-22 missiles, or SS-24 Scalpel, as they were known in the West. The Scalpel had a range of around 11,000 km with 10 warheads, each being able to hit a different target. And at 100 tonnes it was a true monster that was bigger and more accurate than the biggest US ICBM, the Peacemaker.

Being able to move around the Soviet rail network of 145,000 km, the Scalpels were difficult to detect and track. This made them largely immune to an American first strike.

Russia then went on to develop a road mobile leviathan. “The giant Topol-M road-mobile intercontinental ballistic missile is one frightening creation of mankind,” says Foxtrot Alpha. “It can hide in cities, forests, or even nuclear-attack hardened bunkers. It'll travel at over 15,000 MPH while taking evasive action and pumping out decoys on the way to its target. Not only is the road-mobile Topol-M hard to hit once it is in the air, or at the edge of space for that matter; it is also very hard to find on the ground as they can hide pretty much anywhere.”

But what works for Russia – or for that matter China, which also has a road mobile ICBM – may not necessarily work for India. During the Soviet years, Russia was not an easy place to travel, with its own citizens requiring passes to travel internally. There were regions and cities that were off limits to most civilians, forget foreigners. Under such circumstances, one could operate these rail and road mobile ICBMs, without the threat of terrorists or spies trying to sabotage or infiltrate these missile groups.

Russia is a lot freer place today but even now foreigners require passes to visit certain areas. Besides, the vast landmass ensures that mobile ICBMs will always be hard to find or track.

India’s highways and interior roads – where the mobile ICBMs are likely to operate – just not as secure. The biggest threat is from terrorists who may hijack an ICBM and blackmail the country’s leadership. Or worse, figure out a way to actually launch the missile. The usual picture of a terrorist is that of a wild-eyed jehadi from Karachi or Kerala, but increasingly they are coming from engineering and electronic backgrounds. The next generation of jehadis may even get training to crack the launch codes of a captured strategic missile from radicalised sympathisers among the Pakistan Army’s field commanders who already operate such missiles.

Providing extra security for land mobile ICBMs will only compromise secrecy and thereby defeat the purpose of having them on mobile platforms. Considering that India is a soft state where radicalised groups brag about their aim to destabilise India and also openly associate with jehadis, it might be worthwhile to rethink the decision and look at launching more ICBMs from sea-based platforms.

An article published by Lt Col Ilshat Baychurin in Rossiyskaya Gazetaon November 18, 1995 illustrates the complexity and costs that come with operating mobile strategic missiles: “Each railroad combat missile system is designed for lengthy autonomous performance of alert duty on patrol routes. In addition to the cars where the missiles themselves are hidden, the railroad train has cars which accommodate a dining room and a mobile kitchen. One of the cars is earmarked for rest time for personnel not on alert duty. It consists of the compartments to which we are accustomed, the only difference being that they contain additional built-in third berths and a foyer with a television set and tables for board games. In addition, there are air conditioners and a shower. Provision is also made for a technical maintenance car.

“As regards the personnel of the railroad missile complex, each serviceman has a strictly defined range of official duties. Great responsibility is entrusted to the combat launch crew, but those who ensure the working of the harmonious mechanism of this unique train of its kind also have a hard time. The people who are responsible for the train's movement, communications, guarding, and for material and medical provision for the missile-carrying train perform particularly strenuous service. Considering that the trains are designed for lengthy autonomous movement, success depends on the quality of everyone's work.”

You get the picture: road mobile systems don’t come cheap or easy.

While the government press releases continue to describe the Agni V as a 5500 km range IRBM or intermediate range ballistic missile, Chander described the missile as an intercontinental ballistic missile (ICBM).

Chander was asked to resign hours before the launch, so the missile man really had nothing to lose – and everything to gain – by revealing the missile’s true scope. In fact, the Chinese – who were observing the test – believe India deliberately flew the missile in a flat trajectory to curtail its range to 5500 km whereas the Agni V is, in their opinion, capable of 7000-8000 km.

With incremental increases, the Agni’s arc will sooner than later cover the US mainland. You see, it all comes down to this: when you are powerful everybody thinks you are great and your jokes are funny too.