Put one foot in front of the other 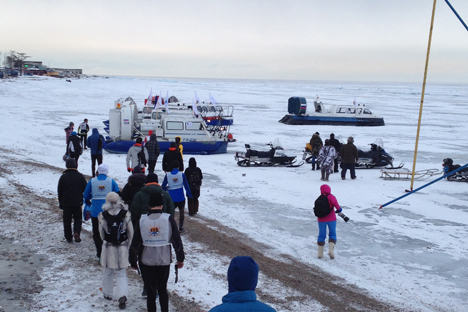 More than 650 people sent applications for the running across Baikal. Source: Lara McCoy

The 11th running of the Baikal Ice Marathon was less of a run and more of a forced march.

I’m not sure when I first thought about running the Baikal Ice Marathon. I looked at the website for years before finally deciding in October 2014 to apply. It never occurred to me that I might not be accepted. After all, if you’re crazy enough and have the resources to go run a marathon in Siberia, who would say no? But it was not so simple. More than 650 people sent inquiries about the 11th running of the race on March 1, 2015; 178 were accepted as participants - 44 for the half-marathon and 134 for the full. I was one of those lucky few.

On the morning of Feb. 28, I flew into Irkutsk, the largest city close to Baikal, and took a bus with some other runners to Listvyanka, a tiny resort town on the edge of the lake. My first glimpse of Baikal was, indeed, magical, as many friends had told me it would be. It was a gloriously sunny day and the ice sparkled. Although the ice was around 30 cm thick, it still sat on top of many, many feet of water, and when that water moved, so did the ice.

This “breathing,” as the race organizers called it, caused large chunks of ice to emerge in shards about 10 cm thick on the surface. These thick pieces of ice lay along the shoreline, a kind of ice wave. As soon as I checked into my hotel, I ran out onto the ice, which seemed like the thing to do. 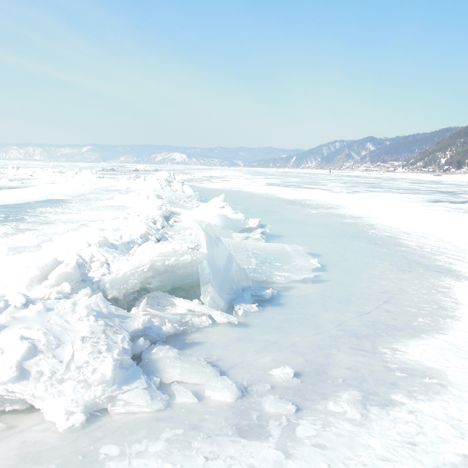 The Baikal ice was around 30 cm thick. Source: Lara McCoy

Everywhere I turned, children were sliding around, ice skaters were swirling by, people in ATVs rushed past. I even saw a guy riding a bicycle.  The south edge of the lake was ringed by snow-covered mountains, and all the people wandering around in snow suits gave the setting a bit of a Colorado ski town atmosphere.

On the ice itself, the areas with some snow cover were perfectly fine for walking, but the clear ice was slick as glass. I wondered how it would feel under running shoes.

At the race briefing that night, the organizers told us that much of the course had a layer of snow, so running spikes weren’t necessary. “Good,” I thought,” snow is traction, this should be ok.” I made a final decision not to wear my YakTrax.

The full marathon crosses the whole of the lake, between the towns of Listvyanka and Tanhoy. The starting point varies each year, depending on conditions. This year, the organizers determined conditions looked more promising in Tanhoy, so on the morning of March 1, those of us staying in Listvyanka boarded hovercraft to cross the lake. Riding a hovercraft on ice is a bit like being in a bumper car you can’t control.

Our hovercraft careened across the lake, flying over ice shards. The trip was supposed to trace the exact path of the course, so we could see what we were in for. We quickly spotted little red flags marking the route – one every 100 meters – well, until the hovercraft crushed a few. 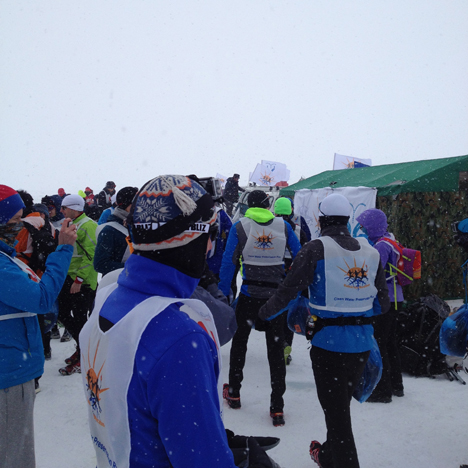 More than 650 people sent applications for the running across Baikal. Source: Lara McCoy

The further we traveled, the harder it became to see the little red flags. The wind picked up and thick snow was falling. It was impossible to see much past the front bumper of the hovercraft. “This is not going to be fun,” remarked one of the other passengers.

Somewhere between the 21 and 35-kilometer mark, we saw the race organizers get out of a separate hovercraft and examine a thick crack in the ice. It had been warmer than usual this year and the final course was only plotted days before the race.

Even the morning of the event, shifting ice forced the race director to mark parts of the course with red paint to warn runners away. The ice was thick enough – the point was not that you might fall in – but running over the ice shards caused by the moving water below was like running over a series of large, slick, sharp boulders.

After a while, we couldn’t see the flags at all – not because of the weather, but because our hovercraft had veered too far from the course. Two new hovercraft showed up to rescue us and take us on to the race site. As we climbed into the second hovercraft, someone asked, “Will they start the race without us?”  One of the guys inside replied, “well, I’m the race director, so they won’t start without me.”

This comforting thought soon became uncomfortable when he asked to hold my foot. “Are you running in those?” the race director asked, feeling the upper of my Nike Lunarglides. I said I had run all winter in them in Moscow. I bought them knowing they would be the shoes that would take me over Baikal. I had worn Lunarglides for years.

“This isn’t Moscow,” he said, “this is Siberia. This is Baikal. The wind can come up unexpectedly and will freeze you from the feet up. You’d better make a special appeal to the lake spirits for good weather – for all of us, but especially you.”

I had never considered that I might have the wrong footwear, but now this thought trumped the idea that I might get lost in the snow and my frozen body would sink into the lake in the spring. But there was nothing to be done. They were the shoes I had.

After more than an hour, we arrived at a lodge in Tanhoy. About 100 runners were milling around, waiting for the Listvyanka group to arrive. The trip had taken longer than expected and everyone was anxious to get started. Practically as soon as we jumped down from the hovercraft, it was time to get to the starting line. Runners burst of the lodge down a slippery path to the lake.

Volunteers checked off our numbers as we left the lodge in an attempt to make sure everyone who headed out into the blinding snow made it to the other end. As we approached the start, we were each given a cup of sour milk. Although the ritual of the sour milk wasn’t particularly well explained in the chaos, the idea seemed to be that to appease and honor the ancient spirits of the lake, you dipped your fourth finger in a cup of sour milk and sprinkled the air four times – one for each of the winds.

And then, suddenly, the race began. I didn’t even really hear any announcement, but in one moment, I looked up from fiddling with my iPod and a long train of runners was heading out, almost in single-file. I had read somewhere that if it was a clear day, you could see the finish line from the start; I couldn’t see much beyond one runner in front of me. Soon enough, I wasn’t looking ahead at all – I had to look down to see where I was going.

The course was covered in snow at least 5 inches deep. My foot sank to my ankle with every step. I had run in snowstorms before; I recalled a particularly memorable training run in which the footsteps I left in the courtyard of my building were completely erased by snow by the time I got back. But the snow cover on the ground, even in that run, was no more than two or three inches at most. Now I felt like I would do better running in snowshoes.

One thing about it – the glacial pace meant that I didn’t feel especially tired. I passed a few people. A few people passed me. I made sure that I was always close behind someone – preferably someone with a brightly colored running jacket. At the 5k mark, I tapped my iPod to check the time. Thirty-nine minutes. My average 5k time is 26. The next 5k went by fairly quickly, all things considered. 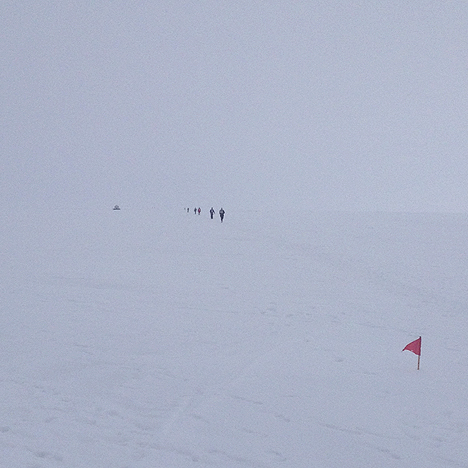 It was hard to see this little red flag. Source: Lara McCoy

At one point between 7 and 10 kilometers, a patch of ice appeared under the snow. We all took advantage of it to pick up the pace, but it lasted only a few hundred meters. At the 10k mark (1 hour, 20 minutes), it stopped snowing for a while. I looked around and there was white as far as I could see in every direction. I thought of all the articles I’d read about polar expeditions where people wandered off into the blinding snow. The landscape was beautiful in its own way, but more otherworldly than beautiful.

I had told myself that I wouldn’t eat or drink anything until the second aid station at kilometer 14. At about 12 kilometers, I found myself stumbling more than usual and then I simply fell over.  The snow made a soft cushion. There was never any thought of stopping. I just kept on moving, one foot in front of the other, in that long line of runners. Sometime after 12k, I fell in with a little group of about four runners and we moved along together for a while, single-file, like members of a chain gang.

The next aid station appeared – and it was at the 15k mark. We had gone one kilometer further than expected. It’s hard to express the relief I felt at being even that little bit closer to the end. I ate an energy gel and gulped a bottle of water. And I met Emma, a British girl who also lived in Moscow, who chatted with me and got me through the last 6k. As we jogged along, the closest person in front of us was a tall man who wasn’t running at all, just stumbling through the snow. “He looks like that scene from Doctor Zhivago,” Emma said. 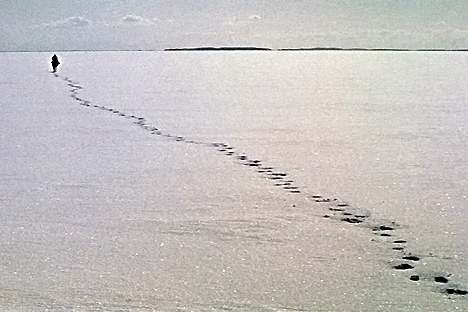 Finally, in the distance, a red tent appeared – the 21k mark and the end of the half-marathon. I stared at it for several hundred meters, trying to determine if it was a mirage. But it was real. I’d been shuffling along, but decided I would run the last 400 meters, no matter what it took. Because of the slow pace, I still had plenty of energy, and I gathered it up, plowing by those last few course marker flags. At the 21k sign, I turned off my iPod – 2 hours, 59 minutes, 56 seconds. A full hour more than I had expected to run.

“I wouldn’t wish that on my worst enemy,” Emma said.

I went into the red tent and took off my shoes. Steam rose from my feet. A hovercraft arrived to take us back to Listvyanka. As we approached the shore, the driver steered away from the race course and threw the craft into a series of spins. 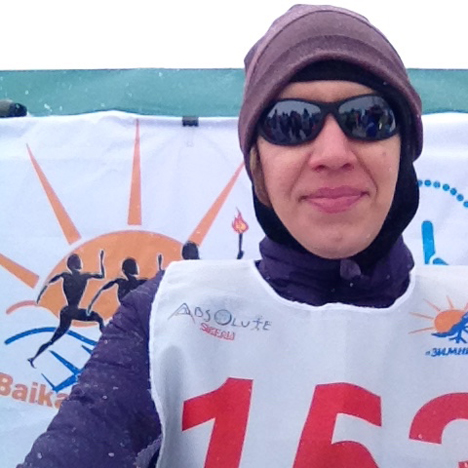 I had run 21km across Lake Baikal. Source: Lara McCoy

“It’s better than Disneyland!” said one of the girls sitting across from me. The sun came out. The ice sparkled. I had run 21km across Lake Baikal. I guess it was an accomplishment after all.

Running in Moscow is taking off, but in many ways, this is a young man’s game.