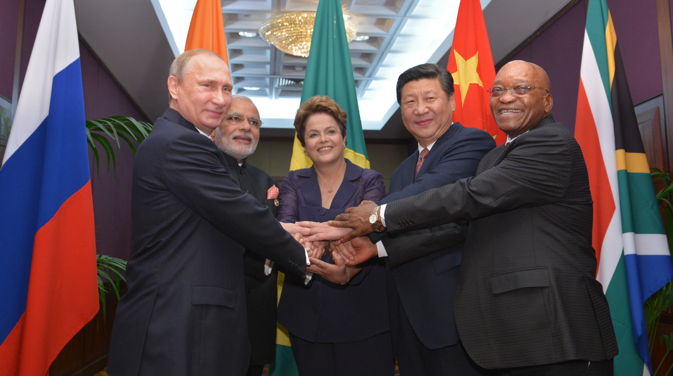 If the BRICS group wants to write the rules of global governance, then it must be prepared to play a more political role and map out concrete pathways of cooperation on a range of geopolitical and economic issues.

The old order always gives way to the new. Changing economic dynamics are already causing world-shaping political configurations. The BRICS group is solidifying a pole position in global economic governance for its members – Brazil, Russia, India, China and South Africa. They are currently pushing through their economic agenda to balance against the current economic system that was drafted by the western powers towards the closing years of World War II. Several other emerging powers, including Indonesia, Venezuela, Argentina and Vietnam, will not just welcome such an outcome, but want it to happen as soon as possible.

But you cannot push through an economic agenda without political means and military intent. In order to “form a more perfect union,” the BRICS need to grow a more political spine.

Let's start with sanctions. They are economic in nature but political in intent in that they are meant to effect a regime change in Russia. They are also illegal as per the WTO rules that state there must be equal access to the goods and services markets of member nations.

In the backdrop of these sanctions against a leading member, what have the other member countries done in response so far? India and China have declared they do not support sanctions and have naturally refused to join the wolf pack. But what else?

Article 5 of NATO's charter says an armed attack on one member will be considered to be an attack on all. One can't help but admire the elegance in the article's simplicity. If the BRICS adopt a similar rallying motto, it would be a signal that they are willing to match politics with politics.

For instance, the BRICS members can kick off counter sanctions on the West. This isn't easy or simple because all of them trade heavily with the West and their economies are intertwined with the rest of the world. For instance, China's blistering growth from the 1970s through to the present day has been made possible primarily due to American investment in China and market access to Chinese exports. And India’s IT success story is almost entirely due to outsourcing services to the US.

But there are ways around this conundrum. For starters, India and China could start with raising duties on non-essential luxury goods – such as wine and spirits, Hermes scarves, perfumes and household fixtures – from Europe and the US.

The next step could be to hike duties on industrial products such as machine tools and consumer goods such as cameras, television sets and appliances. Then there can be a clampdown on western magazines, newspapers and news broadcasts. China, for instance, has banned Google, but it hasn’t impacted Chinese exports or growth.

These sanctions – disguised as trade measures – should be spread across several months. And the explanation has to be simple – we are protecting domestic industry. Of course, the West will cry foul, but it can be gently reminded that both the US and Europe heavily subsidise their farmers and key industries such as aerospace and defence.

Such a calibrated response will send a message across to the West that it cannot bully a fellow BRICS member.

Counter sanctions might sound like a fantasy currently, but in today’s world anything is possible. Did anyone expect the mighty Soviet Union to unilaterally dissolve itself at a time when it had become the preeminent military power? You see, the world can turn on a dime.

If there’s any doubt that the BRICS will develop into a political grouping, just look at South Africa. The country lacks the economic heft to qualify as a member state. Its inclusion was solely because it is perhaps the most influential country in Africa. By roping in South Africa, the BRICS have got a foothold in the continent that could be the most important growth story of the 21st century. By deepening its investment in the region, the BRICS also act as a bulwark to checkmate western plans to re-colonise the continent.

Russia has been quite vocal about charting a more political path for the BRICS when Moscow takes over the group’s presidency in April 2015. Russian Deputy Foreign Minister Igor Morgulov says the long-term aim of Russia and its partners is to transform BRICS from a “dialogue forum and tool of coordinating positions on a limited range of issues into a full-fledged mechanism of cooperation in the key issues of global economy and politics”.

The BRICS have the most to gain if the US and its allies are cut down to size. In fact, as far back as 1997, Moscow and Beijing issued a “Joint Declaration on a Multipolar World and the Establishment of a New International Order”, in which the two countries committed to strive to promote the “multipolarisation of the world” and a new order where “no country should seek hegemony, engage in power politics of monopolize international affairs”.

Of all the BRICS, India seems to be the one wanting to sail in two boats. Despite having suffered over 200 years of brutal colonial rule, it continues to aspire for friendship with the Anglo-American bloc, which only wants India as an obedient poodle. At least that is the role the US has in mind for India. It was a role played exceedingly well by Britain, and now Washington wants a new sidekick. Since wannabe poodle Australia doesn’t really do it for the US, the Americans hope India will accept that role.

First up, India should stop apologising to the West or the Vatican for trivial matters. What rights do European and Americans have to preach peace and non-violence while doing exactly the opposite? Leaders are not supposed to be defensive. When was the last time China apologised for anything? Well here's the short answer – never.

The Chinese believe they owe nothing to the West –or for that matter anyone. The Chinese view is that no matter how often it threatens (or is accused of threatening its neighbours) it cannot match in villainy or brutishness the conduct of Britain, Germany, Portugal, Spain, Belgium, France, The Netherlands, Germany and the US in their respective colonies. The average Chinese citizen is, in fact, determined to avenge the humiliations heaped on them during the colonial era.

Did Russia apologise for claiming back its former territory of Crimea? Far from it. Moscow backed up its words with military might, and the West can only cry from the sidelines.

That is the kind of fire in the belly that all BRICS members need to generate to “form a more perfect union”.