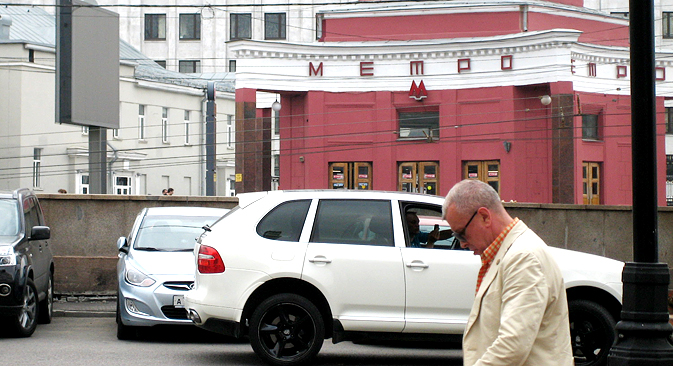 "A metro is метро." All photos by Errol Chopping

It seems so much is written about the Russian language. Maybe I see it that way because I am interested in it, but to me it seems to always be there, and everywhere.

I’m hopeless at it though.

Facebook recently advertised that on the Asia Pacific edition of Russia Beyond the Headlines there a test for those learning or wanting to speak Russian. It allows you to use an online translator too. The link is here if you want to try it. When I tried, I didn’t do too badly, even though I am embarrassed to say I did use an online helper.

I get text messages from my Russian colleagues all the time, often in the Russian language or with Russian phrases in them. Occasionally I understand, but that’s very occasionally. Most of the time I’m stuck, and annoyed.

I wonder at experts like Alexey Mikheev. I read his work and am astounded and fascinated. He’s so knowledgeable and very readable too. How can someone be so accomplished in English and in Russian?

Verbally I am a little better than I am in writing (the emphasis here is on the word ‘little’). I have some CDs which go through a lot of conversation and I listen to them in the car, and so I can kind of get the sound of the some words. I can even make a small conversation, as long as it’s easy. Yet, when I see it written I’m stumped and this is probably because it’s in Cyrillic. Cyrillic does seem so inscrutable, so strange to a person who is only used to reading Latin letters. I am helped a bit by some of the mathematics I learned in a former life…

What also helps me is the logic that each character is pronounced the same way all the time.

What a bonus that is, and it makes me realise how hard it is for those who have to learn English. We use a ‘C’ in ‘cat’ and we use the same letter ‘C’ in ‘city’, but we don’t say them the same at all.

Like so many people, blessed with just a little bit of knowledge I have really strong opinions! These are based on just my empirical observations. It seems to me (remember it’s just an opinion) that a great deal of the Russian language consists of English words. I’m guessing it’s about 20%. There are lots of times I see a written word and then struggle to say it. When, or if, I can say it I say it over a few times and sometimes its meaning dawns. I know this word! and I know it because it’s an English word. I remember seeing a sign in Vladivostok, down by the railway station and across the road. It read супермаркет. I struggled for a while, saying aloud: ‘SSS oo per mar ket’. Oh! It’s ‘Supermarket’.

I am critical of people who venture into a foreign country but remain in their own cocoon of cultural ignorance (there, I’ve said it). Some of these folk can travel for weeks in a country and never meet a native. They can eat there but never taste a morsel of the local food. They can speak and communicate with their guide but never say or hear or understand a word of the local language. How can this be? Well, I suppose it can be when that cocoon is a tourist bus. I was on one of these recently and overheard the man behind me. He’d been in Russia for over two weeks and he was saying ‘I wonder what that word is?’. He was referring to the word written underneath every set of traffic lights in Russia. The one he’s seen hundreds of times. Four letters, right under the stop lights…

Under every set of traffic lights. Photo by Errol Chopping

I can understand when you see it for the first time, but when you see it a hundred times surely you must start to wonder, and make some guesses. C is pronounced ‘S’ (always remember), T is ‘T’, O is ‘O’ and п is Pi: our ‘P’. So the word is ‘STOP’.

I have a sister in law. She travels a lot and has been to Moscow, but almost always goes on a guided tour. There’s a possibility that she’s been cocooned there too. I was stunned and really happy to hear that she and her husband recently ventured alone into the Moscow metro, lured by tales of the cathedral-like paintings, the sculpture and the posters. I reckon others in the tour must have been stunned.

Well, a metro is a metro is a метро. If you can find your way around the London one you can probably also figure out the one in Paris. The one in Moscow is the same of course, except that the station names are in Cyrillic. You go into the station off the street, up to a machine, poke 30 rubbles in, and out pops a ticket. You go to the board and note the place you want to go to, and you try to figure out the way the placename looks, and you count the stations in-between. I might want to get to Киевский because I can walk around from there and get a boat tour at the Radisson Hotel.

I find the platform. Photo by Errol Chopping

I find the platform and hop on, knowing how many stops away it is. I count: one, two, three... I look out at the names on the stations. A local lady sees me counting and wondering. Then she says in perfect English: ‘Where do you want to go?’ ‘To Киевский’ I say, in what I think is my best Russian accent. ‘Ahh, two more stops’ she says. When Киевский rolls around she gesticulates ‘Here it is, it’s here!’ and I hop off.

Signs are everywhere and some we know because we either recognise their look or they are written in English. Like this…

The look. Photo by Errol Chopping

others are pretty easy but have a Russian word as well…

In English. Photo by Errol Chopping

So far so good. If you look closely you’ll notice a word in that photo which is a good one to know and not too hard to recognise: ресторан. With a little deduction you can almost read it.

There’s more. What most of us really want, and certainly I want each morning, is a coffee. Looking out of the window of the Versailles hotel in Vladivostok early one morning I spy the café across the road…

and even in my morning haze, and at this distance, I can see they sell coffee.

and, as I’ve already mentioned ф is ‘F’, so кофе is coffee, of course!

The idea is to get out and walk, and to visit a restaurant or a bar, and shop and see the sights and travel the way the locals do. To buy flowers, drink the coffee, eat at cafes. This way you engage and speak and communicate. If you are fair dinkum and sensible you will meet fair dinkum and sensible locals. They are interested in helping you and being with you and sharing your enjoyment while you are helpful and enjoying life. If you are arrogant or stroppy, or haughty, then that’s the kind of local you will meet.

And so it goes. The bus and the walks go on. Those cocooned in a bus seat can still look out of the windows and see the signs all over Russia. What do you see? What do you understand?