Staring at the sun: How Russians watched the solar eclipse of March 20 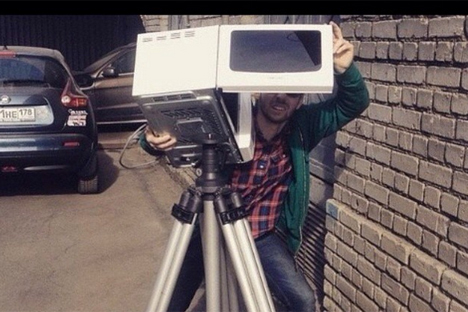 Europe and large parts of Russia became witness to a solar eclipse on Friday, with people using all kinds of different devices to watch it - the most popular were 3D glasses or CDs. Like people all over Europe, the RBTH team watched this anomaly, too - and now we'll show you how Russians watched the total solar eclipse.
Post by Marina Obrazkova.

Unless you were in a cave or abstaining from media in all of its forms, those of you in Europe surely heard about – or maybe were even lucky enough to see – the total solar eclipse, which occurred on March 20, 2015. A solar eclipse occurs when the Moon passes between Earth and the Sun, thereby totally or partly obscuring the image of the Sun for a viewer on Earth.

Virtually all of Russia watched. And by watched we mean safely, of course, with people making sure their eyes were protected and never looking directly at the sun at any point without proper protection. And by protection we mean…just about anything, as far as Russia is concerned (there’s a reason we’re considered one of the most resourceful nations).

Things normally recommended for watching a solar eclipse include pinhole projectors (for the DIY types), eclipse glasses or aluminized Mylar sheeting. Here is what people from Moscow and St. Petersburg came up with instead.

You know what they say: An X-Ray a day keeps the eye problems away

And here we thought that we’d never ever use CDs or floppy disks again!

Now, as we start moving east things get even more interesting. Welcome to Chelyabinsk – a city proclaimed by scientists to be the most contaminated spot on the planet, a city that was closed to foreigners for 44 years, a city which had an atomic weapons complex called Mayak as its neighbor for decades.

The people of the area have suffered no less than three nuclear disasters. Saying that the residents of Chelyabinsk are tough would be a gross understatement.

They don’t believe in luxuries like pinhole cameras or specially designed eclipse glasses.

How did you watch the solar eclipse? Source: Yaplakal.com

And that’s only what managed to find its way online…

Russians also never fail to make jokes or political references where they’re begging to be made:

Photo from Sevastopol: “A few days ago the eclipse occurred but it was very cloudy in Sevastopol’…so I took a photo of it today!”

“I just want to watch the eclipse”

“I am absolutely certain that the solar eclipse is a Russian military maneuver aimed at adding the sun to the Russian Federation.” (pictured: Jen Psaki, spokesperson for the U.S. Department of State)

The eclipse according to Kiev’s version