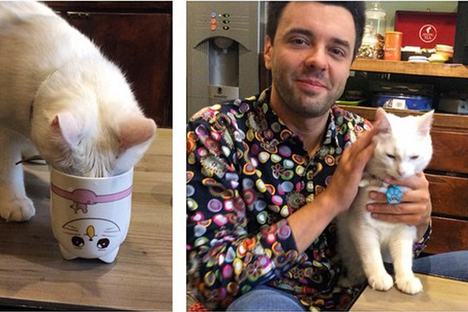 A new café recently opened its doors to the Moscow public. But this is not just any café – it’s Moscow’s first ever cat café. This ingenious idea originated in Taiwan and is on its way to conquering the entire globe, including Russia. Such cafés have already popped up in St. Petersburg, Kazan and Krasnoyarsk. RBTH decided to rummage through Instagram to get a closer at this phenomenon that is making its furry way across Russia.

"Kotiki i Lyudi is finally open! It’s true the cats are already tired and hide in the corners, but we managed to cuddle some of them.”

The beginning of April saw the arrival of a new addition to Moscow's already vibrant café scene. But unlike the others, this one has a certain fluffiness to it. Yes, we're talking about Moscow's first ever cat café Kotiki i Lyudi (“Kitties and People”), home to nine felines ready to keep visitors company as they sip on their hot beverage of choice. The best part: If you really like one of the cats you can take it home with you.

Sipping on lattes while cats rub against your leg is not the only thing you can do here: Kotiki I Lyudi offers an entire program devoted to man’s feline friends. For example, visitors can learn how to draw cats or watch Japanese cartoons about them, while the staff walk around resembling something out of the musical Cats.

The cat café idea originated in Taiwan, where it is almost impossible for people renting property to have cats as pets due to restrictions put in place by many landlords. When the first ever cat café was established in Taipei in 1998, Japanese tourists flocked there in droves to admire, cuddle and snuggle up with the felines, as well as to reap all the accompanying health benefits, because, after all, coming into contact with animals helps to relieve stress. Being able to care for an animal or cuddling a cat improves a person's wellbeing and reduces stress levels, according to some scientific studies.

Eventually the Japanese got tired of getting their cat cuddles overseas and the first cat café appeared in the Land of the Rising Sun in 2004. Soon after the concept began spreading further afield.

The first cat café in Russia opened in 2011 in St. Petersburg and “employed” cats formerly belonging to the city’s largest art museum, the State Hermitage. Other Russian cities soon followed suit – Samara, Krasnoyarsk, Irkutsk and others. So we decided to have a peek at how Russians like to spend time with their furry buddies in these cat cafés.

“I wish the Kotiki i Lyudi café prosperity and many cats!”

“The first cat café in Moscow, Kotiki i Lyudi. The cutest cats and wonderful people who organized it all! Congratulations.”

“Visited the fantastic cat café. Almost all the cats are affectionate and happy to please. The only confusing thing is that there are too few cats.”

Beating trendy capital cities like Paris and London to the chase, Russia's northern capital established Russia's first ever cat café way back in the summer of 2011. Now 20 cats of various breeds – ranging from the gigantic Maine Coon to the phlegmatic Persian cat – are proud to call the café home. Cat Republic has become so popular that now you can only get in by making an advance booking – something that even the super-fancy restaurants would be jealous of!

“Have you already taken a Cat Republic selfie?”

“We’ve heard you’re 40 today and you are still not married.”

Opened in May, 2014 this time café (a café where customers pay for the time they spend there instead for tea, coffee etc.) is located in the basement of an old two-storey building. The building’s façade features funky black cats against a white background and a black and white creature by the name of Elya looks out at the street from the window.

“What? What do you want? Purrrrr!”

Alyona, founder of the Murzik café

“All humans take a shower in the morning, but cats… Cats take the sink.”

“Sharice, what do you think’s in this cup? Oh, Pea, it looks like the administrator’s drinking milk without us.”

Two spacious halls make up Murlandia, which opened just last month (March 2015). One of the halls offers board games and the other one has comfy soft furniture for kids to play and roll around on. And there are cats as far as the eye can see, of course!

“My husband switched off from work and fell into childhood, coloring in cute pictures with cats.”

“It’s very homey here, the affectionate and calm kitties are ready to share their warmth.”

244a/2 Baikalskaya Street (in the DOKA building)

“The cat café Koteika is for strong and independent women.”

“Today I visited the cat café Koteika and recommend it to all cat fans!”

“Andreas, a new inhabitant of our cat café, has already fallen in love with our administrator.”