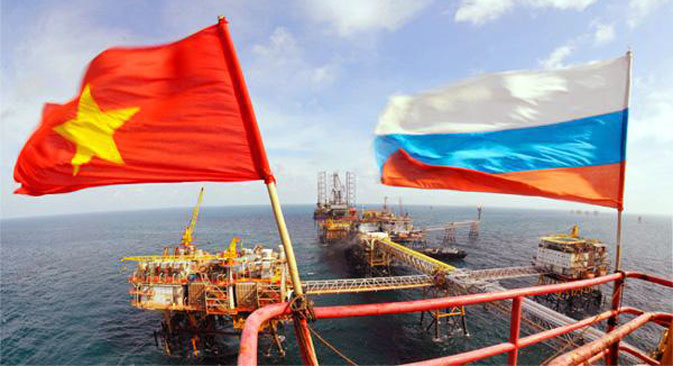 It’s time to consider if there is anything that Russia can offer Vietnam that others can’t.

On April 6-7, 2015, Russian Prime Minister Dmitry Medvedev visited to the Socialist Republic of Vietnam (SRV). Russian public opinion is accustomed to perceiving Vietnam as a traditional friend and partner, preferring to ignore potential disagreements that arise between the two countries. Meanwhile, Vietnam’s current foreign policy is complex and full of contradictions, and Moscow will have to adapt to this.

To survive politically the ruling Communist Party of Vietnam (CPV) has to demonstrate its ability to protect the country against external and internal threats and to improve the living standards of the country’s 90 million population. Economy is the top priority now, as Vietnam has only recently entered the group of middle-income countries and still faces various growth pains and challenges. In 2015-2016, GDP is expected to grow by just over 6 per cent, which is quite good by the standards of developed countries, but falls short of an economic miracle. Therefore, today’s priority for the export-oriented Vietnamese economy is to gain access to technology, investment and markets.

In terms of foreign policy, this implies the most pragmatic development of a wide network of partnerships. The Vietnamese leadership lost any trust in bloc solidarity since the Border War with China in 1979, and prefers to put its eggs in different baskets, trying to maintain good relations with China, the US and Russia, as well as India, Europe and other countries in East and Southeast Asia.

The close relationship that Vietnam enjoys with China is second to none. The reasons for this are quite obvious, namely civilizational commonality, the similarity of political systems and the tyranny of geography. The largest trading partner of Vietnam now accounts for about a quarter of the latter’s total imports. At the same time, huge trade deficit with China is sparking profound concern among Vietnamese experts, and this is not even the darkest spot on the surface of China-Vietnam ties.

The greatest difficulties are being caused by the territorial disputes over the Spratly and Paracel Islands in the South China Sea. And if conflicts between just Beijing and Hanoi are resolved with certain ease, the involvement of other Southeast Asian countries in the disputes and close attention of the international community fuels the debate, making a settlement nowhere to be seen. As it is often the case, external actors are siding with the weaker Vietnam. This only frustrates China, which feels like a besieged fortress and back-pedals with great reluctance.

Developing the relationship between Vietnam and China has never been easy. Of the dozen liberation wars that Vietnam has fought in its long history, only two were not against China. This nourishes nationalist sentiments in Vietnamese society and a fair part of the internal opposition favors a more hard-line attitude towards its northern neighbor. In May 2014, when China brought an oil rig within the exclusive economic zone (EEZ) of Vietnam, rioters across the country burned and looted scores Chinese-run factories, many of which in fact turned out to be Taiwanese or South Korean.

Yet, a split between China and Vietnam would be too far-fetched. Common political culture and spiritual affinity between the elites drive close interparty relations. It is even assumed that no major foreign policy decision is taken by Hanoi without consultations with Beijing. Anyway, it is the contacts between the CPC and the CPV that ensure the most expeditious settlement of conflicts. Closed-door talks on oil rig issue were held between party officials, although this incurred the displeasure of many members of the Vietnamese Communist Party, who insist on taking a tougher stance towards China.

This love/hate approach naturally prompts the Vietnamese leadership to diversify its foreign contacts, playing on the US’ desire to strengthen alliances in Asia. Vietnam is a key element of the rebalance and Washington’s major “new friend.” After normalizing relations in 1995, the two countries have developed their relationship by leaps and bounds, especially in the economic sphere. Today the US market is the main direction of the Vietnamese exports (about 18 per cent of the total). What is equally important, Vietnam is ready to join the Trans-Pacific Partnership (TPP), the main economic tool for strengthening US influence in the region.

In 2014, the rapprochement between Washington and Hanoi was given two strong impetuses. Firstly, the ban on the supply of lethal weapons to Vietnam has been partially lifted. So far, supplies have been limited to arms and military equipment designed to “strengthen maritime security,” but the Vietnamese insist on the full lifting of the embargo, saying that without it the normalization of relations cannot be considered complete. Secondly, the so-called 123 Agreement on nuclear cooperation with Vietnam has been signed and approved by the US Senate Committee on Foreign Relations, which allows American companies to supply equipment for nuclear power plants to the latter. This is especially important due to the growing demand for electricity in Vietnam.

Relations between the two countries can hardly be called frictionless. The observance of human rights remains the main stumbling block. The United States criticizes the Vietnamese government for infringing upon the rights of the political opposition, religious minorities, as well as of workers and press. Indeed, working with the communist government is not an easy job for the Americans, but the CPV has its own serious concerns that Washington’s rapprochement has a long-term goal of eroding the party’s monopoly on power.

However, as of today, the US is ready to turn a blind eye to the fact that Vietnam does not meet the high standards of democracy and human rights. A stable political regime coupled with strong state control over the army is a valuable feature for an continental partner of the US in Southeast Asia. Recognizing its value for Washington, Hanoi expects to strengthen its own security, safeguard access of Vietnamese goods to the US market, and attract new technologies and investments.

Though betting on close ties with China and the United States, the Vietnamese leadership still does not want to fall victim to another bipolar confrontation. And this is why Vietnam still needs Russia. Relations between Moscow and Hanoi today have three very promising directions.

The first is arms trade base on extensive Soviet military aid to Vietnam, still considered a priority. The contract for the supply of six Kilo class diesel-electric submarines to Vietnam can probably be regarded as the most important achievement in this sphere. Submarines have been regarded the coolest bling in military fashion in Southeast Asia, as many countries see them as an effective way to counter Chinese assertiveness at sea.

Second, the energy sector is important in several respects. When it comes to this area, Vietsovpetro is the omnipresent success story. This is a joint venture for offshore oil exploration in Southern Vietnam that has successfully operated since the 1980s. However, there are a number of more recent projects, including those in Russia (which may come as a surprise to many Russians), namely in the Nenets Autonomous Region and in the Orenburg Region. The Ninh Thuận 1 Nuclear Power Plant project, launched in Vietnam by Atomstroyexport, is considered the gem of Russian-Vietnamese cooperation in the energy sector.

The third facet is the Eurasian Economic Union-Vietnam free trade area (FTA), the agreement on which is expected to be signed in 2015. This is one of the biggest multilateral projects for both countries. It is planned to zero out import duties on most goods and thereby contribute to the growth of bilateral trade.

But there are difficulties too. The movement of goods, which is a recognized indicator of the level of the development of bilateral relations, has indeed intensified. The parties note ‘with satisfaction’ that the commodities trade has reached $4 billion. The thing is that this figure makes up only 1 per cent of total Vietnamese turnover and about 0.5 per cent of the Russian stat. By comparison, the Vietnamese volume of trade with the United States amounts to $36 billion, and with China – to $58 billion. The creation of the EEU – Vietnam free trade area will certainly generate some growth, but it is doubtful that the effect will be significant enough.

Russia faces competition even in the above-mentioned areas of traditional cooperation between Moscow and Hanoi. South Korea, Japan, and soon the United States are Russia’s competitors in the nuclear power industry. In oil production, India is close on the heels. What will happen with the Russian export of military equipment if and when the US completely lifts completely the ban on the supply of combat arms to Vietnam? The sensational winning of the bid last year for the construction of an assault rifle assembly shop by the Israeli “Galil” in Vietnam, which managed to leave behind the darling of the developing countries Kalashnikov, is a bite of the reality sandwich.

The time has come to consider if there is anything that Russia can offer Vietnam that other countries cannot. What goods can help increase trade turnover? Will the Russian military-industrial complex maintain the price-quality balance at an attractive level for Hanoi? Does Russia have enough resources at the moment to participate in major investment projects in Vietnam? Can Moscow benefit from the growing economy of its Asian partner? These questions aren’t going anywhere.

Russia is important for Vietnam as a major outside power with which its leadership enjoys a strong partnership. However, the strength of these relations has almost never been tested in recent history. In March, the media reported that State Department had asked Hanoi to prevent the use of Cam Ranh airbaase by Russian aircraft refueling nuclear bombers. The Vietnamese side confined its reaction to a rather short and maild comment to the Russian Sputnik News website. Surely, such a leak to the media is a rather insensitive gesture on the part of the State Department, but the question has been asked: Is Vietnam ready to suffer political costs for close cooperation with Russia amidst the latter’s worsening relations with the West?

Similar collisions may arise within the Russia – Vietnam – China triangle. Both countries are strategic partners of Russia, but what do we do done if there is a conflict between them? And if we have to choose, let's be honest: we know what Moscow’s choice will be. The rich history of relations and the development of political and military dialogue are part of a solid foundation of bilateral relations. But if we can’t build a solid house on this foundation, we will still have nowhere to live.

First published in Russian at Lenta.ru