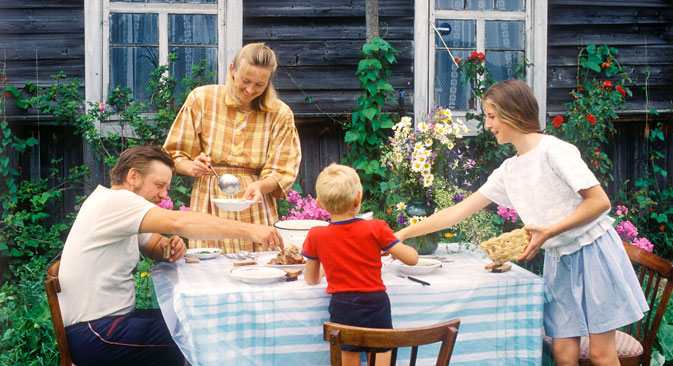 Russians are famous for their hospitality. Source: Matveev/RIA Novosti

Russian hospitality is something that needs to be experienced to be understood. As is the case with India, middle class families in Russia warmly welcome guests.

A family I once knew in Sakhalin spoke to me about the first time they hosted a couple of foreign business associates for dinner. This was in the late 1990s when the country had just begun to recover from chronic food shortages and a few years after people had to queue just to get some bread. Despite not being very well off, the family managed to get the best local seafood, good Bulgarian wine and other delicacies to make their English visitors feel comfortable. The guests, who were on lucrative contracts with oil giants, gifted the family two packets of biscuits!

Before judging these guests from the UK, it’s important to understand that there are strong cultural factors behind this kind of behavior. As is the case with Indians, Russians tend to have more vivid and meaningful relationships with friends and excessive individualism hasn’t largely swallowed Russian society outside of Moscow. In the so-called West, for many, an emphasis on this individualism has made them thrifty. This is also reflected in the way, Europeans tend to be far more conservative spenders while on vacation compared to the Russians.

Just like Indians believe in the concept of Atithi Devo Bhava- the guest is God, Russians traditionally consider guests providers of good luck. There is certain logic to this kind of thinking as in most cases guests bring enthusiasm and positive energy. I particularly enjoy taking my guests around town since I always get some fresh perspective on where I live and manage to see things in a different light.

Russian society is very much open and people are often curious to know those from strange and exotic lands. I could fill up hundreds of pages writing about experiences on interactions with hosts and even strangers on long-distance trains that led to meaningful and long-term friendships, but one particular experience stands out.

It was the summer of 2003 and I decided travel with two friends from Sakhalin to St Petersburg by (ferry and then) train. We had around 21 hours of transit in a town called Vanino in the Khabarovsk territory. The small town is pretty and is surrounded by hills with views of the Tatar Strait, but we felt there was little else to write home about.

In the afternoon, while sunbathing by the river, a friend of ours went to have a conversation with a local. He asked the lady whether there were any waterfalls in the nearby hills. After laughing at his question, she asked where we were from and when he mentioned that it was two Sakhaliners and an Indian (all of us in were in our early-20s at that time), she offered to show us some places in the town and its outskirts. She drove us up hills from where there were the most stunning sea views and then took us to a local outdoor sports club, where she giggled as she introduced friends to a visitor from India out of all places. We were honestly overwhelmed with the hospitality and the kindness of the person who was a total strange hours earlier.

Of course, this was in “another world,” a place where the Internet was still developing and there was no social media or smartphones. We did manage to stay in touch for several years after this chance encounter. Vanino and nearby Sov Gavan turned from pretty yet unexciting towns at the end of the Russian mainland to beautiful and cultured places where people lived quite but interesting lives.

Contact with strangers comes with its own risks in this day and age, but then sometimes your own intuition can be a great guide.

I also witnessed great hospitality when visiting cousins and grandparents of friends in smaller Russian towns and cities. What was really touching was the way the family members of these warmly embraced me like I was one of their own. Such stories are not uncommon for those visiting family of friends in many Indian states that have a great tradition of hospitality such as Punjab and Rajasthan.

One of the keys to really enjoying a more unique Russian experience is to learn the language. English is not even close to being widely spoken outside of Moscow and St Petersburg and there are generations of cultured, well-readand sophisticated people who know so much more about India and its traditions than many of us know about Russia. Of course, I have seenfriendships conquer the language barrier with people somehow finding a way to communicate despite not being under the influence of alcohol.  Being fluent in Russian is the best way to really build strong relationships in the country and also to be part of a society that is open, welcoming and embracing.

Like in India, when visiting a family for a meal or a short stay, it’s important to understand that in an overwhelming number of cases, the hosts spend a lot of time in planning and preparation. Taking gifts and mementos or souvenirs that go beyond the clichés would be highly appreciated. After all, no matter how close the Indian and Russian governments are, for the common folk, the other country will continue to remain exotic and mysterious.