Why a BRICS military bloc won’t happen in a hurry 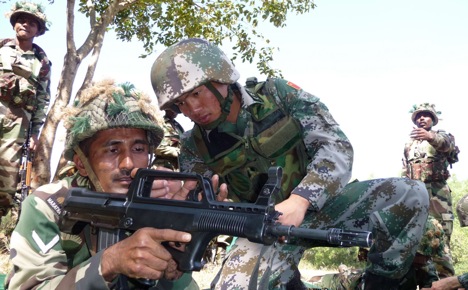 China and India are capable of defending their respective territories and interests. Source: AP

A BRICS military alliance won’t happen unless each of the member states is convinced they are facing an existential threat from the West.

As the jackboots of the Indian Grenadiers and the Chinese People’s Liberation Army thundered down the length of Red Square for the very first time, there has been talk about the genesis of a BRICS military alliance.

Just like the BRICS bank was instituted in response to the financial mayhem unleashed by western banks, a BRICS military bloc will arise if there is a threat perception. Currently, there is no pressing need for the five member states to bring their armed forces under one command.

Take Russia – its military power may be a shadow of the mighty Soviet Union but even the much smaller successor Russian military is a highly potent force. As it has exhibited in power plays in Syria, Crimea and Ukraine, Russia can take on the combined forces of NATO without working up a sweat.

Similarly, China and India are capable of defending their respective territories and interests. Both are nuclear armed and have powerful naval fleets that can blast American gunboat diplomacy right out of the water.

So while the BRICS have – in the words of Russian President Vladimir Putin – “a whole set of coinciding strategic interests”, a unified military command – if at all it happens – is several stages away.

Stepping up the pressure

Military alliances develop with incremental increases in threat perception. For instance, the North Atlantic Treaty Organization (NATO) was formed in 1949 but it was only after the Korean War (1950-53) – during which the US and its allies clashed directly with the Russian and Chinese armed forces – that an integrated military structure was built.

Currently, the only BRICS member to feel direct American pressure is Russia. On December 26, 2014, President Putin signed a new military doctrine for the Russian armed forces. The new doctrine is a response to the deliberate encirclement of Russia by NATO and the economic war against the country.

As countermeasures, the document advocates accelerating the development of the Russian army, the increased militarisation of Russian society, and the development of military cooperation with the other BRICS members and Latin American countries.

China is also facing encirclement. Washington is ramping up naval activity in the Pacific and also pouring its forces into Australia – aimed squarely at Beijing. However, Beijing doesn’t face the kind of existential threat as Moscow.

The 21-page IB report reveals that “a significant number of Indian NGOs, funded by some donors based in the US, UK, Germany, the Netherlands and Scandinavian countries, are using people centric issues to create an environment which lends itself to stalling development projects”. The West’s agenda could be to slow down India’s economy and thereby check the rise of another major power.

The other stealthy war is cyberwar. Both Brazil and India are being intensely penetrated by America’s National Security Agency, with Edward Snowden revealing that the Brazilian Prime Minister’s phone conversations were tapped. Such kind of intense cyber snooping is geared towards obtaining economic and political intelligence, which is again just short of direct war.

South Africa is being targeted in a different way. Currently, there is a buzz in the English speaking world that the South African economy is reeling and law order much worse than during the Apartheid era. By this logic, Vietnam should have submitted itself to French and American colonial rule. The whole idea is to portray black Africans as incapable of self rule.

To be sure, even such threats will not lead to a BRICS military alliance. Only if each of the BRICS members is convinced that the aim of western meddling is the destruction of their economic and social systems will there be a formal military alliance.

But can a united BRICS military force take on the battle-hardened NATO forces?

In terms of members, NATO appears to have the advantage of numbers, with 28 countries versus the five-member BRICS. However, this is an illusory advantage. In NATO, the US is the only large country with a sizeable population whereas all the BRICS countries except South Africa are of continental or subcontinental size. Most NATO countries are just specs on the map.

NATO is in reality a mismatched alliance. For instance, the US, France, UK, Germany and Turkey are the security providers whereas the likes of Latvia, Estonia, Lithuania, Croatia, Poland, Hungary and Bulgaria are the security seekers.

The latter groups is a huge drag on the alliance. For, while the American defence budget is $582 billion, Estonia spends just $250 million, which is probably less than what the Pentagon spends on anti-depression pills for US military personnel. Even Poland, which has consistently asked for a massive American military presence on its territory, spends only $10 billion of its own money on defence.

Even America’s loyal sidekick, the UK, is cutting its defence budget to the bone, leaving the US to do the bulk of military duties. You get the picture – there are a lot of selfish members in NATO. It is very likely that in case of war these same countries will be the first to dive into the trenches.

The one key area in which the BRICS are outright ahead is population. Demography is indeed destiny and the BRICS with 3 billion people are more than three times larger than NATO’s 900 million souls. Also, it is well known that most western nations are going to witness massive declines in population, so NATO will be on a slippery slope in the years ahead.

The western alliance currently has 3.5 million military personnel but in the future it will face huge shortfalls of fighter pilots, soldiers, engineers, scientists, and nuclear power plant workers among others. The BRICS have 4.7 million men and women in active military service and up to 8 million reservists. Plus, Indian and Chinese populations are likely to grow unabated for decades.

NATO currently has 5329 nuclear warheads as opposed to 4840 for the BRICS. But here again numbers don’t tell the real story. The Russian strategic forces are several orders of magnitude powerful than the US arsenal. Russia’s intercontinental ballistic missiles (ICBMs) – secure in silos super-hardened to an incredible 6000 psi as against 300 psi for the American missiles – are going to be decisive. This doomsday force is hardened to not only survive a nuclear first-strike but can easily penetrate existing anti-missile defences. The US does not have any protection against a volley of Russian ICBMs.

The latest Russian nuclear-powered submarine is so quiet it’s known as the Black Hole, and one of them spent an entire month patrolling the US coasts without the US Navy aware of its presence. These super stealthy subs can strike at US targets without much risk.

They may not be needed. Just the Russian strategic bomber force of 195 aircraft can end nearly all human life in the continental US in a matter of hours.

By comparison China’s 300 nuclear warheads may seem puny. But Beijing has the world’s longest range ICBM, which can strike targets 14,000 km away. This missile was developed to rain down warheads on American cities.

In the backdrop of such frightening firepower coming together under a joint BRICS command, the West will undoubtedly use its time tested policy of divide and rule. For instance, the US may pressure Brazil to not join a military alliance opposed to US interests. Around 25 per cent of Brazilians are affiliated to evangelistic churches funded and controlled by their American patrons. They can be persuaded to tweak Brazil’s foreign policies.

The US may try to wean away India by using the lobbying power of Indians living in the US. Or Washington may ask Britain to come up with some old colonial rope trick to entice New Delhi to join an American-led bloc. Although the British are universally disliked in India because of their gory colonial rule, some of the Indian elites may be compromised by dangling Harvard and Oxford scholarships for their children. Outright bribing of the political and military leadership cannot be ruled out either.

After the establishment of the BRICS bank, the West can see the writing on the wall. And the words are not very positive. It will, therefore, do its utmost to stop the BRICS from turning into a military alliance. For, if the five countries join their armed forces, all bets are off the West.