Targeting FIFA and Russia: Why the US is playing foul 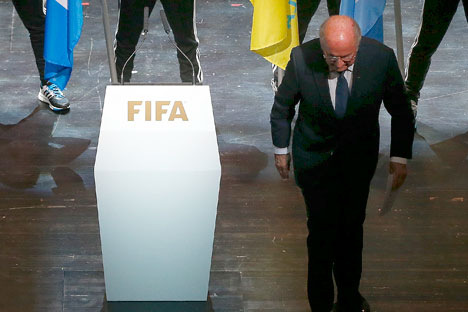 Most people do not know that the much vilified Sepp Blatter is the first FIFA chief to organise the World Cup in Asia and Africa. Source: Reuters

The US-led threat to cancel the FIFA World Cup 2018 in Russia is the last gasp struggle of a declining power.

The US-instigated plan to strip Russia of the FIFA World Cup 2018 is simply the last gasp struggle of a dying empire which is seeing the ground beneath its feet slipping away. After all, why would Americans, who care a rat’s tail about soccer, go sniffing for corruption in FIFA – the global body that controls the world’s most popular sport? As John Oliver said on HBO’s Last Week Tonight, the US investigating corruption in FIFA is like “finding out that Ke$ha arrested a group of bankers involved in commodities fraud”.

Most people do not know that the much vilified Sepp Blatter is the first FIFA chief to organise the World Cup in Asia and Africa. Surely, it couldn’t have gone down well with European and American elites, who are loathe to see one of the world’s most prestigious championships being inaugurated by popular leaders such as Nelson Mandela and Vladimir Putin, who have shaken the racist western elites to the core.

The FBI investigation is also hypocritical because it doesn’t take a genius to guess that had America’s Anglosphere ally Australia won the bid to host the 2022 World Cup, there would have been no such probe.

While the western media is playing up allegations of foul play by Russia and Qatar, they are conveniently ignoring the fact that the Australians used taxpayer cash to pay bribes as part of their failed bid to host the 2022 World Cup. Australia tried to buy votes from FIFA decision makers using $46 million the country had invested in the bid.

Now compare the high-profile clampdown on soccer officials to the liberal distribution of get-out-of-jail cards to America’s corrupt bankers. While the FBI has booked several FIFA officials, only one top banker has gone to jail for serious financial corruption that may have cost the US up to $25 trillion – that’s almo st $80,000 per American. Compared with the human cost – unemployment, poverty, crime, families destroyed – of that ‘Made in Wall Street’ disaster, the social cost of FIFA’s corruption is next to zero.

You get the picture – frustrated by its failed attempts to checkmate Russia and worried by the rapid emergence of multipolarity, the US is getting desperate. America’s inexplicable desire for war against everyone can be compared with the reckless behaviour of a cornered animal. “The United States is broke — fiscally, morally, intellectually,” says David Stockman, a former Republican congressman from Michigan, President Ronald Reagan’s budget director from 1981 to 1985 and the author, most recently, of The Great Deformation: The Corruption of Capitalism in America.

The rapidly shifting economic and geopolitical landscape portends grave tidings for America as a superpower. The following are some of major factors keeping American ruling elites wide awake at night:

Rise of the BRICS

The BRICS – Brazil, Russia, India, China and South Africa – have proved to be an admirably cohesive group, and has re-introduced multi-polarity to the world. This has played havoc with America’s plans to remain the globocop who could steamroll countries opposed to its “my way or the highway” approach.

The BRICS have on more than one occasion stood by Russia. The group’s leading heavyweights, China and India, have solidly backed Moscow, so that US plans to isolate Russia have foundered. None of the BRICS has participated in US-led sanctions against Russia.

The western media has consistently – and rather enviously – mocked the BRICS as a heterogeneous coalition with conflicting individual interests. It has played up the strategic rivalry and border flashpoints between Beijing and New Delhi. It’s a stark example of how the western media just doesn’t get it – if Turkey and Greece, who are rivals if not each other’s die-hard enemies, can be NATO members without wrecking the military alliance, then surely China and India can surely have differences and yet be chummy inside BRICS.

Each time you say “BRICS bank”, Wall Street goes into panic mode. With a $100 billion corpus, the New Development Bank promises to be the ‘lender with a heart’ and compete with the US-led World Bank, which has been responsible for many a developing country ending up in debt. Greece is already queuing to sign up.

Now here comes the even more powerful Asian Infrastructure Investment Bank (AIIB). The China-led bank signals Beijing’s intent to solidify its global ambitions. If Washington was edgy about the NDB, it’s apoplectic about AIIB. “In a desperate attempt to undermine the effort and preserve what’s left of US hegemony, Washington aggressively lobbied its allies last year to refrain from supporting the effort,” says Zero Hedge.

Unfortunately for the US, the UK decided to join AIIB, calling it an “unrivalled opportunity”. With America’s closest ally – or poodle – ditching its master, “that effectively opened the floodgates and in short order, a bevy of western nations and close US allies suddenly reversed course and indicated they were likely to support the new institution”.

At a time when the West is practically broke, its chief rival is having an embarrassment of riches. The BRICS have an estimated $4 trillion in combined foreign reserves, accounting for more than half of the global total, while the G7 nations control only 20 per cent – and less than 8 per cent if Japan is excluded, says a report in the South China Morning Post.

Flush with cash, the BRICS can entice – or to put it bluntly, buy – countries to come over to their side. And they will come running. For, money talks in a language all nations understand.

What’s even more worrying from the US’ point of view is that the western share of the world economy is dropping at an alarming rate. In 2004, the combined GDP of the BRICS was $3 trillion; last year it was $16 trillion or 20 per cent of global GDP. During the same period, the share of the G7 group (US, Japan, Germany, France, UK, Italy and Canada) of global GDP dropped to less than 50 per cent from 65 per cent.

As the influence of NDB and AIIB increases, it will de-dollarise the global economy. Most transactions will be in the currencies of the BRICS, which means less space for US dollars. Unable to find takers for its currency, the unrestrained printing of which finances US military and economic might, Washington will be forced to scale back its plans for global domination.

The race riots that took place in American cities after the police murder of a black teen have had unexpected after-effects in the US. One, the police have become even more aggressive. A Washington Post report says police are killing suspects at twice the previous rate in 2015.

Secondly, police are retreating from their policing duties in high crime areas. For instance, in some of Baltimore’s most dangerous neighborhoods, murders have risen to levels not seen in four decades.

It is worth mentioning here that American blacks today are worse off than South African blacks were under the openly racist apartheid regime. According to the New York Times, “The race gap for wealth in the United States right now between the median white family and the median black family is 18-fold. That’s greater than the black-white wealth gap was in apartheid South Africa."

At the same time, there are plenty of poor whites – from the former middle class – who feel equally disenfranchised. Widespread poverty and a tattered society have created social conditions ripe for mass civil unrest.

Nations facing such societal crises usually find a diversion – such as war – in order to keep the population from questioning the political leadership. The US has been waging war without a break since the Ronald Reagan presidency. And the reason is that American society is broke and Americans need to be entertained with wars – like the Roman emperors did with circuses. The US, which models itself on Imperial Rome, is clearly showing signs of an imperialist empire that is becoming hollow because of its overreach.

Since the 1980 Moscow Olympics the US has tried but failed to isolate Russia. In 2015 it has yet again been unsuccessful. However, what hasn’t changed is that America continues to pursue its dangerous brain dead schemes. Perhaps it’s all part of some plan. As the wise ancient Greeks said: “Those whom the gods want to destroy, they drive mad first.”