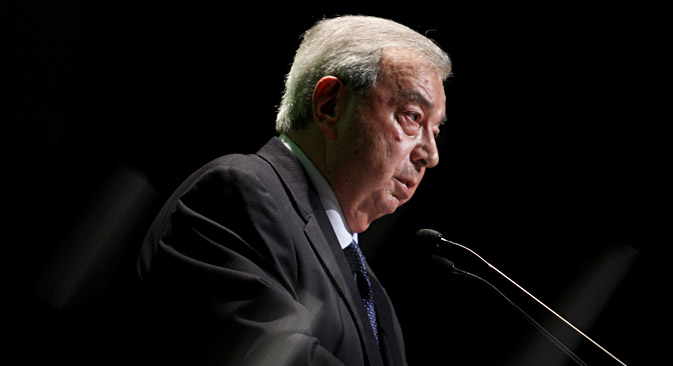 Primakov’s single biggest contribution is that he ended the age of Russian innocence. Source: Olesya Kurlyaeva/RG

Yevgeni Primakov drafted the concept of a Russia, India, China strategic triangle as a counterbalance to the western alliance.

On March 24, 1999, Yevgeni Maximovich Primakov was heading to the United States for an official visit. Midway over the Atlantic Ocean, the Russian Prime Minister learned the combined forces of NATO had started bombing Serbia, a close ally. Primakov immediately ordered the plane to turn around, and returned to Moscow in a manoeuvre dubbed “Primakov’s Loop”.

Primakov’s decision was in sync with what he had set out to achieve. In 1996, as Foreign Minister he had presented before the Kremlin elites a plan to develop a strategic three-way pivot between Russia, India and China. This doctrine of multipolarity would be an alternative to the US-imposed unipolarity of the post Cold War period.

Back then the Kremlin was crawling with pro-western Muscovites. Rotten to the core, many were in the pay of motley American think tanks (read: spy agencies). It was not a time or place to sell an idea as radical as uniting three disparate countries in a strategic embrace.

But like most great ideas, Primakov’s was simple. First, Russia must end its subservient foreign policy guided by the US. Secondly, he emphasised the necessity of renewing old ties with India and fostering the newly discovered friendship with China.

Primakov argued that a Russia-India-China (RIC) troika in a multipolar world would allow some protection for free minded nations not allied to the West. He said the economic crisis in Russia had presented a rare convergence of conditions in the RIC.

Leonid Fituni, Director of the Moscow-based Centre for Strategic and Global Studies, explains: “China is practically the only state in the contemporary world that enjoys over 3000 years of uninterrupted statehood. It has its own rich traditions of state governance, not identical to those existing in the (West) today, but by no means inferior. Through millennia, China has accumulated unparalleled experience of social and political organisation and development.”

Fituni adds: “India, being different in many respects, enjoys a similar wealth of historical experience, often incomprehensible to westerners. The last couple of centuries have been a time of degradation and humiliation for these two great nations. In the eyes of the Chinese and the Indians, this was inextricably linked to the European/western expansion: colonialism and imperial dominance, including the imposition of a normative and economic servitude that still keeps then trapped in the semi-periphery even after the era colonialism.”

Russia found itself in a similar state. It was a time when the former planned economies were "ruthlessly looted by the victorious democracies under the guise of economic reforms or liberalisation. Russian social thinkers and historians noted similarities to the historic period of the destruction and pillage of China and India in the 19th and early 20th centuries”, writes Prof Li Xing writes in The BRICS and Beyond.

Primakov – a former journalist, Orientalist and spymaster – predicted an inevitable degradation of the Russian economy, reduction to "third world" country status, and the continued drain of resources (natural, financial, technological and human) to the victorious West in its attempt to postpone the imminent crisis in the (western core) enfeebled by decades of Cold War competition. (This has an uncanny parallel to the drain of India’s resources – black money and high tech talent – to the West.)

In 1998, Primakov visited India and pushed the proposal for creating the RIC strategic triangle. The new Russian leadership under Vladimir Putin reversed the Boris Yeltsin era drift in Russia-India ties, signed a major strategic partnership treaty and established the institution of annual summit meetings. Fourteen years after Russia had abandoned its old ally, Indians heard friendly voices emanating from Moscow. “India is number one,” Putin said, referring to India’s primacy in the subcontinent.

To be sure, the troika took a long time to reach a basic agreement. A key reason for RIC not getting early traction is the India-China border dispute, which has spun off an Asian version of the arms race between the two giants.

Secondly, in any trilateral partnership, the weakest member – in this case India – acquires prestige and power out of proportion to its actual strength. Beijing – which has traditionally viewed India as weak, divided, slavishly pro-West and above all as a potential strategic rival – clearly did not want to help India achieve that status.

Initially, RIC leaders only met on the sidelines of global summits. “Once the format was underway in 2003, broadening it to include Brazil did not present insurmountable challenges,” write Nikolas K. Gvosdev and Christopher Marsh in ‘Russian Foreign Policy: Interests, Vectors, and Sectors.’

(Goldman Sachs economist Jim O'Neill's term – rapidly adopted by financial and emerging-market analysts around the world – happened to be released at that exact opportune time. O'Neill or not, BRICS would have been a reality, minus that clunky name.)

It wasn’t until 2012 – coinciding with India successfully testing long-range ballistic missiles capable of reaching China’s eastern seaboard – that RIC talks took off. Finally, the February 2015 meeting in Beijing imparted a fresh momentum, with China endorsing Russia’s move to include India in the Shanghai Cooperation Organisation (SCO).

Large as its scope is, Primakov went beyond RIC. “The Primakov doctrine is designed primarily to dilute America’s strength and influence while increasing Russia’s influence and position in the Middle East and Eurasia,” writes policy analyst Ariel Cohen of the US-based Heritage Foundation in a report titled ‘The Primakov Doctrine: Russia’s Zero-Sum Game with the US’.

“Primakov has shown himself to be a master at exploiting anti-American sentiments of the Iranian Shiite establishment, the Arab nationalists, and even the French foreign policy elite. On visits to Japan and Latin American, Primakov promised Russia's support for their efforts to secure permanent seats on UN Security Council.”

But Primakov was not letting American hawks go unchallenged. In a 2006 speech he thundered: “The collapse of the US policies pursued in Iraq delivered a fatal blow on the American doctrine of unilateralism.”

“Having captured more and more countries the North Atlantic Treaty Organisation has approached our borders, and this cannot fail to make us uneasy,” Primakov added. “All the more so NATO extension is accompanied by anti-Russian rhetoric, as well as aggressive policies pursued by the US in the former Soviet republics. Moscow cannot fail to regard all this as activities bred by the displeasure of certain circles in the West by the fact that restoring its enormous prospective potential, Russia is regaining its status of a superpower.”

“We are too honest in these matters and such naivety in the political arena does not lead to good results,” he said in an interview. “I hope that our policy changes.”

In a sideswipe at Samuel Huntington’s Clash of Civilisations, he said Russia would not accept the division of the world based on civilisation-related and religious principles, but would instead pursue its own policies, “cooling hotheads who fail to learn their lessons in Iraq but are all but ready to repeat pernicious combat techniques against unwanted regimes”. In fact, his defining credo was: “Those who do good will be rewarded. Life gets even with those who do bad.”

Primakov’s legacy was best summed up by current Russian Foreign Minister Sergei Lavrov: “The moment he took over, the Russian Foreign Ministry heralded a dramatic turn of Russia’s foreign policy. Russia left the path our western partners had tried to make it follow after the breakup of the Soviet Union and embarked on a track of its own.”

Pointing to the success of BRICS, which emerged from the RIC, Lavrov said the line of countries eager to join the five-member group “keeps getting longer”.

Decades – or perhaps a few years – from now when they chronicle the “Decline and Fall of the West”, substantial credit would go to the man who came in from the Cold War – and changed the map of the New World Order.