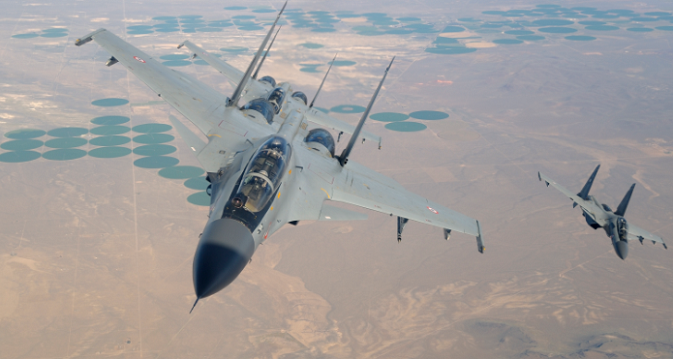 Replacing older MiGs with the Sukhoi-30 makes sense in a crunch situation but in the long term the IAF has to look for alternatives.

India seems to have accepted the adage that you fight with the best weapons you have, not with the weapons you want. The Indian Air Force will stand down three squadrons of the MiG-21 and MiG-27 jets at the end of their life cycle. Replacing these ageing warhorses will be the Su-30 air dominance fighter.

Inducting more Su-30 Flankers to fill in for retiring aircraft is a sensible move – at least for now. Forced to live within budgets, the IAF cannot splurge on flying white elephants like the Rafale, however appealing they may be. The French aircraft is expected to cost in the region of $200 million per aircraft whereas replacement Sukhois made locally at Hindustan Aeronautics Ltd (HAL) cost around $75 million each.

Each Made in India Sukhoi is worth a handful of imported aircraft. As well as the cost benefit aspect, there is the advantage of being able to quickly make up for war losses. During a conflict, foreign sellers are likely to shake down India for everything they can and the IAF won’t be in any position to bargain. If HAL is able to crank out enough Sukhois, then blackmail is not an option.

According to Bharat Rakshak, India currently has 204 MiG-21s and 99 MiG-27s. It is from this fleet the IAF will retire three squadrons – or 54 aircraft – over the coming two-three years. Filling in will be 18 Su-30s.

But here’s the rub. Just like a tradesman needs a number of specialised tools to be able to undertake and complete a variety of tasks, the air force needs specialised aircraft – light, medium-sized and heavy – to perform different roles.

The MiG-21 is a light interceptor and fighter escort, plus it provides combat air patrol. The Sukhoi being an air superiority fighter can perform these roles. But let’s say the IAF wants to vector a couple of aircraft to intercept a Pakistan Air Force JF-17 intruder. The IAF’s fighter of choice against this Chinese knockoff is likely to be a MiG-21 rather than the Sukhoi. While the Sukhoi can do the job, it would be inefficient to use a strategic aircraft in a low to medium intensity mission. Sending an aircraft that weighs over 18,000 kilos (unloaded) against the comparatively tiny JF-17 (6400 kilos) would also be overkill.

Now let’s come to the MiG-27, a mid-sized ground attack aircraft. The IAF deploys this Cold Warrior in two different roles. One, along with the ancient Jaguar and the multirole Mirage-2000, the Russian aircraft is used as a nuclear bomber. With the MiG-27s expected to fly into the sunset by 2020, the Sukhoi are pitching in. Two squadrons of Sukhois – a virtual Mini Air Force – are currently being configured for the nuclear strike role. The Flanker’s Russian designers never intended the aircraft to be used in a nuclear delivery role because the Russian Air Force has dedicated planes for that, but the IAF is proceeding ahead with the conversion because it has few options.

Secondly, the MiG-27 was developed to support rapidly moving infantry and armoured columns. For instance, the aircraft is most likely to be deployed to take out a column of advancing Pakistani tanks. But what's bread and butter for the MiG-27 could prove suicidal for the Sukhoi because the much heavier Flanker isn’t meant to be used in a battlefield support role. Risking a $75 million aircraft against a Pakistani Al Khalid tank that costs $5 million makes no military sense. Smaller jets or attack helicopters are better suited in this role.

Where the Sukhoi fits

The Sukhoi’s primary strength is in destroying strategic targets and establishing air dominance for other IAF aircraft to operate with impunity. A good example of such a role played by an IAF aircraft was during the 1999 Kargil War when MiG-29s flying over Jammu & Kashmir prevented Pakistan’s American-built F-16s from coming to the aid of the Pakistan Army.

While a number of IAF aircraft took part in the Kargil campaign, it was the cover provided by the MiG-29 Fulcrum armed with beyond visual range (BVR) missiles that exposed the PAF’s plight. “While PAF fighters did fly combat air patrols during the conflict, they stayed well within Pakistani air space," says a Strategy Page report. “On occasions, IAF MiG-29s armed with the deadly R-77 BVR air-to-air missiles were able to lock on to PAF F-16s, forcing the latter to disengage. In the absence of a PAF threat, the IAF was able to deliver numerous devastating strikes on intruder positions and supply dumps.”

This is the role the Sukhoi is meant to play in any future conflict. Currently being armed with the supersonic BrahMos missile, the Flankers can also establish dominance over the oceans to prevent a re-enactment of the 1971 War with Pakistan when the US despatched its Seventh Fleet up the Bay of Bengal in a show of support for Pakistan. The British Navy had also sent in a small flotilla to target Mumbai.

It was the timely arrival of the Russian Pacific Fleet from Vladivostok that stopped this joint American-British strike on India. The downside of this support from Moscow was that India had to make major compromises in its war plans. New Delhi had intended to strike deep inside West Pakistan and completely annihilate Pakistani armour. But Russia insisted that since India had achieved all its objectives – including slicing Pakistan in half – there was no need to continue the war. Moscow was under pressure from Washington, which threatened to call of strategic arms limitations talks if India further dismantled Pakistan.

The incursion of the US Seventh Fleet left a deep scar in India’s collective memory. In this backdrop, the Sukhoi, BrahMos and an extensive armoury of ballistic missiles are India’s insurance that in any future conflict, threats from the US or China can be neutralised without having to rely overly on Russia.

The Sukhoi can only be a short-term fix, not a permanent solution. India needs to rapidly induct the HAL-developed Tejas light combat jet and step up work on newer versions. At $30-40 million the Tejas offers a tantalising cost-benefit advantage over the Rafale.

A few hundred Tejas jets of varying configurations can overwhelm enemy defences. It was a Cold War strategy adopted by Russia during the 1970s when its fighter jets were not as advanced as western aircraft. The Russian logic was that "quantity has a quality all its own". The belief was that multiple attacks in tandem could pre-empt, unhinge and paralyse the enemy.

India also needs to look beyond HAL in case the Tejas turns out to be a dud like the Marut jet of the 1960s. A brand new aircraft company – with foreign aerospace specialists – whose sole mission is to develop world class warplanes is the need of the hour. India’s aircraft sector can emulate the success of the BrahMos Corporation, which employs Russian engineers and scientists and is run like a private company free of State control.

For a country of India’s economic and geopolitical heft, dependence on foreign military purchases is not just embarrassing but also suicidal.