Five takeaways from the BRICS summit 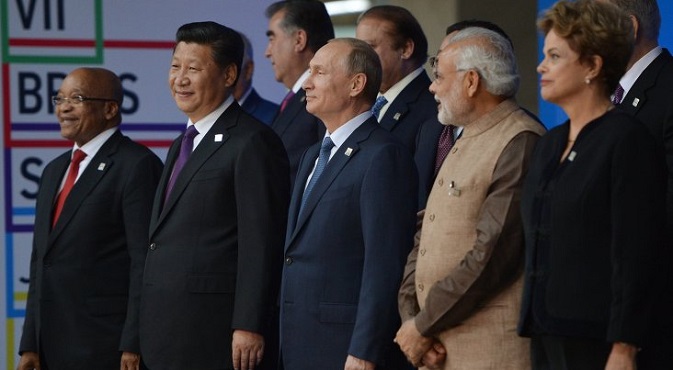 While BRICS leaders attending their summits appear to walk with the bearing of conquerors, European politicians are battling furious public protests. Source: BRICS2015.ru

Here’s what you need to know about the big-ticket gains made by the BRICS at their seventh summit at Ufa, Russia.

You’ve heard it before: BRICS will never be a threat to the West; BRICS will not transform into a political grouping; BRICS are a purely economic entity; most BRICS economies are in trouble. Well, it’s time to ‘unhear’ it all.

A search on Google Trends shows searches for the word BRICS increasing more than 12 times during the 10-year period from July 2005 to July 2015. Clearly, the group is gaining in popularity but there are a lot of incorrect assumptions being made about it – largely in the western media but also by their camp followers in the emerging countries.

Here are five facts that will clear the air about the BRICS.

BRICS economies are not sputtering

Here’s a staggering statistic – China used more cement in the last three years than the United States used in the entire 20th century.

Bloomberg reports the combined economic output last year of the BRICS almost matched America’s GDP. But just eight years ago, the US economy was double the size of the BRICS.

The above statistics are an indication of the frightening pace at which the five BRICS countries are catching up with – and in some areas pulling ahead of – the West. Predictions that the Indian and Chinese economies would overtake the US in 2040 or 2060 are being revised to the 2020s. This is because of twin trends moving in tandem: steady – albeit slow – growth in the BRICS plus the western economies moving in reverse gear.

So don’t believe those economists and experts who point to Russian, Chinese and Brazilian economies losing their sheen. When they declare China’s dream run is over because the Chinese economy grew “only” 6 per cent, they don’t realise that figure translates into $1 trillion (PPP), which is the size of the Australian economy. And that’s in a bad year.

Gloves are off, politically speaking

Russian President Vladimir Putin said at Ufa that the coming together of the BRICS, SCO and EEU can provide a “powerful economic breakthrough”. However, the bigger picture is instead of being ‘merely’ economic or political, the BRICS are waltzing to strategic, long-term ties.

Unlike previous meetings that were focussed on laying the groundwork for partnership among the five members, the seventh BRICS summit at Ufa marks the milestone where the BRICS signalled their intention to shift the world’s centre of gravity away from the West.

Because the acronym has its origins in the world of finance, many observers view the BRICS as an economic grouping. When the BRICS stock markets were on fire, finance gurus talked them up to the sky. But since nothing grows to the sky and these economies are not performing up to expectations, the BRICS are being written off.

Also, the western media often refers to the complete lack of homogeneity in the BRICS as if racial similarity was a precondition for unity. It also never fails to mention the India-China rivalry and border tensions that stand in the way of a true union.

But the BRICS group is not only an economic entity. It has expanded into the political arena so that the economy was just one of the agendas – among several – at Ufa.

The wide-ranging, punitive and illegal economic sanctions slapped by the West against Russia have given Moscow and Beijing the Goldilocks moment – not too early, not too late, but the perfect opportunity – to pitch BRICS, the Shanghai Cooperation Organisation (SCO) and the Eurasian Economic Union (EEU) as the core of a new international order.

That economic sanctions are a really harebrained scheme is now being realised by the hotheads who imposed them. Sanctions haven’t burned Moscow but they are hurting Europeans, who were already reeling under joblessness and faced tough future prospects. Sadly for them, Russia is leading the BRICS towards an alternative ecosystem as an insurance against western economic blackmail.

The BRICS now have the answer to the American loan sharks, the World Bank and the International Monetary Fund (IMF), which have been responsible for the economic enslavement of a number of developing countries. With its HQ in the financial powerhouse of Shanghai, the New Development Bank (NDB) has just held its first board meeting and will soon be lending internationally.

The NDB and the China-led Asian Infrastructure Investment Bank – in which all BRICS countries are founding members – will break the monopoly of the World Bank and IMF and could make their functioning more transparent. “It will motivate the IMF and the World Bank to function more normatively, democratically and efficiently, in order to promote the reform of international financial system as well as democratisation of international relations,” said China’s official newspaper Global Times in an article titled "BRICS cooperation helps to build new international framework".

So the next time American and British intelligence agents – embedded within the IMF or World Bank as “consultants” – want to sabotage the economy of a free-minded developing country or assassinate a nationalist leader or an honest bureaucrat, the chances are they will be asked to stand down by the bankers. Competition – like money – talks in a language everyone understands.

The NDB – aka BRICS Bank – will start off with a capital of $50 billion which will be hiked to $100 billion in two years. Headed by India’s K.V. Kamath, the bank is just what the doctor ordered for large Russian enterprises such as state oil company Rosneft, private gas producer Novatek and Russia’s biggest bank, Sberbank, that are impacted by sanctions.

However, according to Kamath, the NDB should not be viewed as a tool to help sanctions-hit companies but said the bank would look at requests from Russian companies. “We are not looking at it in that context at all,” he told Reuters.

Guess what, Kamath or not, Russian firms will be queuing up at the NDB.

Hellenic Hellhole vs order in the Urals

Success has a lot to with public perception. The eastern nations are the ones supposed to be divided and squabbling, but for weeks the world has been witnessing the westerners slug it out in an ugly family drama gone viral. While BRICS leaders attending their summits appear to walk with the bearing of conquerors, European politicians are battling furious public protests.

At Ufa in the Urals, as the leaders of the BRICS calmly presented their drafts for a new world order, in the Hellenic Hellhole that is Greece, overbearing and overfed Germans were shoving austerity down the throats of hungry Greeks reeling under 50 per cent youth unemployment.

Such perceptions can directly impact financial flows, which tend to gravitate towards markets and economies that are secure and stable. Where would you like to keep your hard earned millions – in turbulent Europe, racially divided America or the comparatively calmer BRICS?