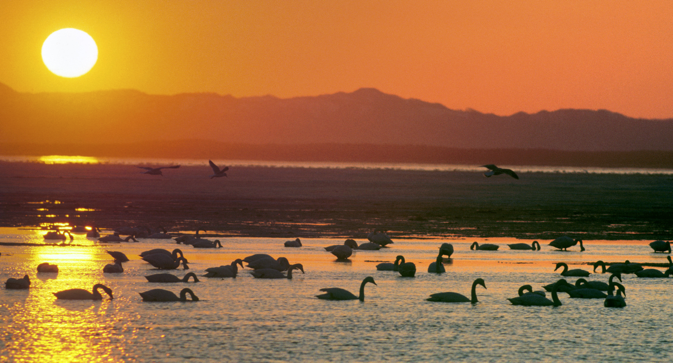 Sakhalin is one of the most beautiful places on earth. Source: TASS

There’s something clearly distinct and unique about Sakhalin that sets it apart from other parts of Russia.

Inclement weather and turbulence over a section of the Tatar Strait made many people on the aircraft from Vladivostok to Yuzhno-Sakhalinsk nervous. Being a veteran of flights from the Russian mainland to Sakhalin Island, I hardly yawned. One can easily get used to rough winds over the strait, but the vagaries of the weather on the island are an entirely different matter.

Here we are in the middle of July and the captain announces that the outside temperature is 9 degrees Celsius! A storm had passed over the island and left it in a time warp known as spring. Over the years, I have seen my fair share of odd cold spells in the summer in Sakhalin, when a jacket is a must!

Sakhalin Island, my Russian home, is one of the most beautiful places on earth, but comes with a caveat - cold weather. There’s a famous joke about the island. On a winter day, a ‘fresh off the boat’ expat asks his Russian colleague if she’s ever experienced summer on the island. She replies that she was away that day. Another oft repeated joke is that the weather in Sakhalin changes as quickly as the moods of a beautiful woman!

Of course, if one can accept the cold winds and the bone-chilling North Pacific Ocean breeze that blows across the island from time to time, then there is so much to appreciate about this island. Despite the oil and gas boom on the island, it is one of the most sparsely populated places in the world. The 948-kilometer long island has 16,000 lakes, to go with its rivers, mountain ranges and breathtakingly beautiful coasts, blessed with coves, rolling hills and a rich marine life that includes seals and endangered species of whales.

In many ways, Sakhaliners have the kind of life that people in most other parts of Russia can only dream of. For starters, the sea is never far away. There are patches in the summer, when one can lay on a warm beach and sunbathe. But even in the winter months, people drive to the seashore and walk on the frozen top layers of the North Pacific Ocean. The winters bring with them a host of sports, such as skiing, skating and ice fishing. Essentially, a Sakhaliner does not have to fly off to a far-away destination to laze by the beach or go to Sochi or Europe to partake in winter sports.

For those that do want to travel, the idea of the island being at the “end of the world” is just an unfair stereotype. The center of the world’s economic power is continuously shifting from West to East and a large number of booming Asian cities including Seoul, Tokyo, Beijing and Shanghai are short-haul flights away from the island. There is also a direct ferry service to the Japan.

Being an island, Sakhalin is still in some ways isolated. Thankfully, its cities are spared of multinational fast food chains, although ugly and characterless malls are now a dime a dozen.

Another thing I love about my Russian home is the fact that it is multicultural and diverse. The island has a Korean community as well as a small but visible population of indigenous people. The island also embraced change when the oil and gas projects came up, resulting in a vibrant expat and international scene in the heyday of the oil boom.

For a big part of the last decade, it was not uncommon to hear English being spoken on the streets by groups of expats and Russians. From 2001 to 2008, Yuzhno-Sakhalinsk had the largest population of expats in Russia after Moscow and St Petersburg. But then in 2006, Gazprom took over the Sakhalin-2 project from Shell and two years later, Russia’s first liquefied natural gas plant was ready.

In 2015, as I walk on familiar streets, those days when almost every expat in the city waited for the latest edition of the Sakhalin Times seem like some sort of fantasy. To an extent, the expat population has been replaced with immigrants from former Soviet republics.  I am told that the 2008 economic crisis was almost a death knell to the lively expat scene on the island.

The only remnant of those days from a decade ago are long traffic jams, which are a legacy of the wealth that was created on the island by the oil and gas projects.

It’s a cold evening in Yuzhno-Sakhalinsk and as I sip some Darjeeling tea and watch the sunset over the green mountains, I realize that the island has in many ways gone back to the days when it was just a nondescript and independent Russian region that was doing fine on its own without the outside world. Yet, for someone who spent some of the best years of his life here, Sakhalin will always be home. My heart lies somewhere between Kommunistischesky Prospect and Komsomolskaya Street in Yuzhno-Sakhalinsk.