The traditional or the modern: what medicine is better? 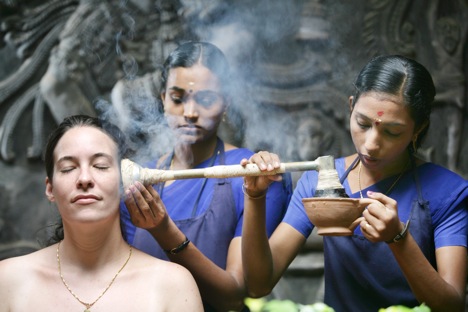 Over the last 15 years, Russia has made vigorous efforts to go in for Ayurveda in the country. Source: Alamy/Legion Media

An Indian woman in Moscow writes home to share facets of her life in the Russian capital and the intense nostalgia everyday events evoke in her.

It has been a white Russian November this year. The trees stand almost naked, stripped down to the last auburn vestiges of Autumn. As I sit at my desk writing to you, the early light of the day softly begins to fill my space beckoning me to step out and breathe in the morning. From my window I can see the neighbouring woods dotted with bright coloured “skvoreshniki” (pardon me, for flaunting my Russian every now and then. It’s a language I’m absolutely in love with. “Skvoreshnik” is the Russian word for birdhouse).

I am told that children during the Soviet era were encouraged to build simple bird houses for their craft class. This affection for the ‘skvoreshnik’ seems to have spilled over into modern Russia. Some feed the birds out of kindness, as food is hard to come by when the land is covered in snow. Others make ‘skvoreshniks’ as weekend family projects to amuse young children, who squeal in delight as “belkas” (a distant cousin of our much smaller squirrel) scurry to collect food placed in bird houses by kindhearted earthlings. Sometimes, when I am pensive, I find solace in the woods in a copse of birch trees close to where I live. I leave a fistful of rice in a ‘skvoreshnik’ there and it takes me closer to my Indian roots, where feeding animals, birds, even rats is common practice. I often think how alike our hearts are – Indians’ and Russians’.

And yet, sometimes how different! Perhaps I owe this slight cynicism and the heaviness in my heart to the Supermoon. As the moon circles closer to the earth the tides rise higher, or so they do in my heart. I fell out with a dear Russian friend over something so trivial that it made me think that while Indians and Russians are a soulful people, our souls really are so different. It all started with me mentioning that I wasn’t feeling well. My well meaning friend suggested I see a doctor, advice I was only too keen to disregard. You know how I am, I don’t like swallowing pills unless it’s absolutely inevitable.

I prefer to take a more holistic approach to healing by restoring the balance of elements within and opening up the channels in the body with diet and yoga. He explained to me that in Russia, from the very second day after a child is born, a medical worker visits the baby everyday for a month, ensuring the baby’s well-being. In his concern for my well-being, he insisted I should see a doctor. Nevertheless; I resisted; our exchange escalated into a full blown argument and he called India a savage land with an uncivilized people and ill-developed level of medical care.

This predictably brought all civil conversation to a halt. I wanted to tell him that India is not savage, and gets considerable revenue from medical tourism. Its medical colleges have a fairly high level of education. I wanted to tell him India is a civilization so great and evolved that the world looks to it for a higher spiritual understanding. It is the land of yoga and ayurveda. So much more I could have said. But I wondered if I really were wrong in considering the doctor a last resort - perhaps I the brown savage, was truly ignorant in front of the civilized white man. And it saddened me.

The very next day, as my guardian angel would have it, all fell neatly back into place. Most unexpectedly, someone invited me to a new movie: ‘Doctor Strange’. I am so far away from the English speaking world here in the land of Pushkin that I hadn’t heard of the movie and had no inkling of what to expect. In my subdued reflective state, it seemed easier to just play along and go for the movie than to select one myself or oppose the proposal. And voila! It is a film that underlines my own position in life; a meeting of Eastern philosophy and Western medicine in Hindu Nepal. The storm in my heart calmed down, the fog of self-doubt lifted.

I have grown up in an environment where the natural self-healing powers of the body are valued. Even as a child I remember our family doctor telling my father when he would fuss over some small illnesses; “Nothing to worry about, it’ll pass. But if you are worried, take half a pill of (this or that)” My dad always bought the medicine but most mild illnesses could be healed by sitting in the sun and taking some home-made concoction. India is a country where ‘daadi ke nuskhe’ or grandmother’s recipes for healing still play a strong role. But that doesn’t mean that we are backward. It just means that many of us don’t rush to the doctor at every sneeze or at the sight of every little boil. Russia, much like India is just as divided in its approach to medicine– some still adhere to home remedies and others with a more modern outlook have their doctor on speed-dial. I wouldn’t judge either as being wrong. They are just different schools of thought, with me being a disciple of the former. I am eternally grateful to that comely young fellow for having pulled me out of my shell and taken me for the film. The 3D spectacles which I brought home from the movie as a souvenir, will remind me of the doubts that had temporarily fogged my vision.

We left the cinema hall to find it was snowing. Soft gossammer crystals of snow gently dancing around me and then settling on my eyelashes, nothing short of a blessing from the almighty. It was like the heavens above were telling me to not lose faith. As we exchanged notes about the movie, I was pleased to find him in agreement.  We walked back in that moonlit bathed night, freshly fallen snow crunching under our feet, and ‘there was light’.

Words from a beautiful song ‘Colours of the wind’ came to me:

“You think I'm an ignorant savage, And you've been so many places;

I guess it must be so.

But still I cannot see, if the savage one is me

How can there be so much that you don't know?

India hides within its bosom many a mystical secret. For those who are capable of surrendering to her charms, appreciating her, she can caress the soul and heal and rejuvenate. For those who are sceptical, she is in no hurry to unveil her glory.

Soon thereafter, my freshly restored confidence in alternate medicine received another boost by way of a visit to the ‘banya’, the Russian bath house. More on that later.

The sun is up now and I must go leave some nuts for the ‘belki’ in the woods.

With you far away, it’s been a cold, cold autumn. Soon mom’s garden will be in full bloom, the petunias, the phlox and the chrysanthemums, and that intoxicating fragrance of roses. India is so magical even as the air begins to get nippy….(sigh). In this world draped in white I long for all those colours of the wind. The wind of home.

Let me know what you think at indiangirlmoscow@mail.ru. Waiting to hear from you,