Defending Australia: Why the Sukhoi is a better option 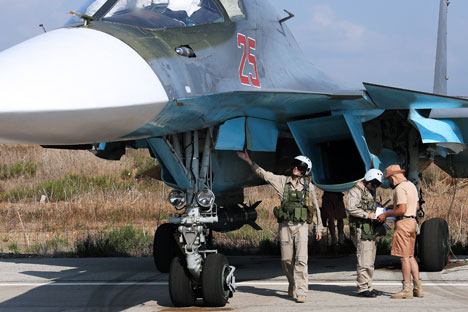 TASS
With the ultra-expensive F-35 experiencing embarrassing failures, Australia needs to look at the Su-35 Super Flanker for enhancing its air power in the years ahead.

Defending a large country like Australia with a small air force is not an easy job. If the Royal Australian Air Force (RAAF) sticks to its hush-hush decision to acquire the F-35 Lightning II as its future fighter, that job could get a lot more difficult.

The RAAF wants to replace its ageing F-18 jets with the F-35, but the American stealth fighter has flown into severe turbulence. The super expensive aircraft – with a price tag of anywhere between $148 million and $337 million – received its latest setback this week when Justin Trudeau, Canada’s newly elected prime minister, said he would cancel the country’s planned 65-plane purchase. According to Defense News, “Such a move would reverberate across the globe, with all remaining partners forced to pay higher prices for F-35s.”

One fighter-industry executive in the UK told Defense News the F-35’s problems went deeper than a price hike. “The problem is the aircraft is tens of millions of dollars more than they originally told people it would be, and that’s just the acquisition price. It’s the sustainment cost that will destroy air forces,” he said.

A myriad of problems

The F-35 was touted by its manufacturer Lockheed Martin as an all-rounder jet that would bomb ground targets, shoot down enemy fighters and remain stealthy. Lockheed’s slogan was: “First-look, first-shot, first-kill.” Maybe if the enemy aircraft was of 1950s vintage that would be true.

But as it turns out, even aircraft that are several decades older can whip the F-35. A test pilot who flew the stealth jet against the F-16 – an aircraft that it is supposed to replace – reported that the F-35 can’t turn or climb fast enough to hit an enemy plane during a dogfight or to dodge the enemy’s gunfire. The test took place on January 14, 2015 during which mock air battles were held at a variety of altitudes, speeds and angles of attack, which left the F-35 huffing and puffing against its 1970s era opponent.

Signs that all was not well with the programme first surfaced in July 2008. In a simulated dogfight involving an attack by Russia’s Su-35 Super Flanker against a mixed fleet of American F-22 stealth interceptors, F/A-18 Super Hornets and the F-35, the supposedly stealth fighter was “clubbed like baby seals” by the Su-35.

The war game conducted at the US Air Force’s Hickam airbase in Hawaii, was witnessed by at least four Australian air force personnel and a member of Australia’s military espionage agency, the Defence Intelligence Organisation.

According to Australian Member of Parliament Dennis Jensen, a third party with knowledge of the final classified test results had told him the F-35 was comprehensively beaten in the highly classified simulation.

Aerospace experts across the world aren’t surprised by the F-35’s less than stellar performance in these tests.

“It’s a turkey,” declares aerospace engineer Pierre Sprey in an interview to Dutch television. Few people are as qualified to speak about fighter aircraft as Sprey. He is the co-designer of the F-16 and the A-10 Warthog tank buster, two of the most successful aircraft in the US Air Force (USAF).

Winslow T. Wheeler, Director of the US’ Straus Military Reform Project, Centre for Defense information, agrees. “The F-35 is too heavy and sluggish to be successful as a fighter,” he says. “If we ever face an enemy with a serious air force we will be in deep trouble.”

The starkest example of western aircraft coming off second best against a serious air force is the Turkish jets fleeing in panic when Russian Sukhois – operating in Syrian airspace – achieved radar lock on them. In a series of aerial encounters that left the Turks and their NATO bosses red faced, Turkish F-16s were repeatedly painted by the radars of Su-30s. So tenacious was the radar lock that the F-16s had to escape some distance from the Syrian border to disengage from the encounter.

It is a measure of the dominance of the Sukhois over Syria that the USAF has ordered its fighter pilots to stay away from areas where the Russian Air Force is operating.

Before Syria, the Indian Air Force (IAF) had dominated mock combat against western jets. In July 2015, IAF pilots flying Su-30s routed the Royal Air Force 12-0 during an annual exercise in Lincolnshire, UK. Previously, the IAF’s then brand new Sukhois and ancient MiG-21s had defeated the USAF’s F-15s during exercises in 2004 and 2005.

What Australia can do

According to the independent think tank New Australia, the RAAF should consider not just the Sukhoi Flanker but in future the PAK-FA. “We recommend that Australia enter an arrangement with Sukhoi similar to HAL in India to build either the Sukhoi Su-35S Flanker or Su-32 Fullback aircraft under licence in Australia. The current preference is Su-35S,” says New Australia.

“Sukhoi licenses the manufacture of Sukhoi planes and parts in several countries including India and China. Australia could buy the entire Sukhoi aircraft and build the avionics, consumables and weaponry locally. Many companies in Russia, Asia, Israel and Europe manufacture Sukhoi components. Sukhoi is ‘open source’.”

The think tank cites a study by Air Power Australia: “In strategic terms the Su-35S is a game changer, as it robustly outclasses all competing Western fighter aircraft other than the F-22A Raptor. Deployed in significant numbers it is capable of changing the balance of power in any region where this occurs. This reality does not appear to be widely understood in most Western air forces, or Department of Defence bureaucracies.”

Sukhoi describes the Su-35 as a 4++ generation aircraft with some fifth generation – or stealth – characteristics. Where the F-35’s survival depends entirely on stealth, the Su-35 is an all-round fighter packing lethal weaponry, extended range and of course legendary super manoeuvrability, which is the defining characteristic of the Flanker family.

The Su-35’s radar is capable of detecting a 3-square-metre aerial target at a distance of 400 km and can track 30 airborne targets and engage eight of them at the same time. Its engines give the Su-35 limited supercruise capability, or sustained supersonic speed without the use of afterburners. Radar-absorbent material is applied to the engine inlets and the front stages of the engine compressor to halve the Su-35's frontal radar cross-section.

Shortly after wowing the crowds at the 2013 Paris Air Show, test pilot Sergei Bogdan repeated a claim made in 1989 when the Flanker first performed the cobra manoeuvre. “The rapid change in velocity can cause a Doppler fire-control radar to break lock,” he told Aviation Week. In plain English it means the Su-35 can become invisible to radar.

Plus, its range of 3600 km is eminently suited to cover Australia’s vast landmass.

In 2002 protests erupted in South Korea after the country’s government awarded a jet fighter contract to Boeing. It was alleged that the US had pressured the Koreans to pick their fighter. Whether the Korean Air Force preferred Boeing’s F-15 or the Russian Su-35 is not known but according to an AP report, the Koreans acknowledged the “Su-35 was the cheapest plane to buy and maintain”.

Costs and maintenance are critical factors in fleet availability. Because the F-35 is expensive to buy, air forces will buy fewer units. For instance, Japan currently has 100 F-15s but it will replace them with just 70 F-35s. Again, because the aircraft will be expensive to fly and maintain, air forces will limit pilot flying hours. (Spending cuts have forced the USAF to eliminate more than 44,000 flying hours and ground 17 combat air squadrons).

Besides, ‘stealth’ comes with a price. On the F-35 most of the maintenance is on the stealth coating. “It is a ludicrous impediment to combat,” Sprey says. “You are sitting on the ground for 50 hours fiddling on the aircraft trying to make it stealthy when it’s not stealthy anyhow.”

Plus, 100 per cent fleet availability is a logistical impossibility. Going by stealth aircraft availability rates, only 48 of the RAAF’s planned fleet of 70 F-35s will be battle ready at any given time. In a future clash with, say, the Chinese, who have 400 Flankers, Australia’s chances are smaller than small.

Wheeler, who has dealt with US national security issues for over three decades, lays out the implications for western air forces planning to induct the F-35: “The pilots will get worse as they’ll get much less training, which is most important than any technical issue. There’ll be far fewer pilots as the whole force will have to shrink, and you will basically have a showpiece aircraft that can’t do anything. It’s useless, it’s truly monumentally useless, it will ruin any air force that uses it.”

With several Asian nations already armed with the Su-30 and both China and Indonesia going in for the Su-35, Australia’s window of vulnerability will only increase with an F-35 dominated fleet. It remains to be seen whether Australia’s elites accept that modern Russian fighter aircraft have decisively ended the dominance of western air power.