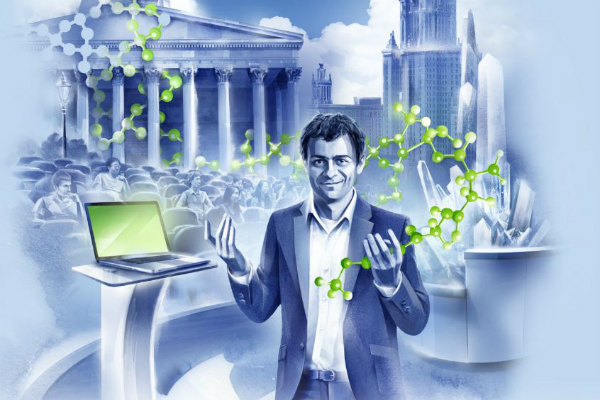 Facebook/ Artem Oganov
Unusual conditions, such as extremely high pressure or strong electromagnetic fields, make for strange chemical compounds that deny common scientific understanding. If we want to understand the universe, we have to understand this bizarre new chemistry.

Artem Oganov is a Russian and American theoretical crystallographer, chemist, physicist, and materials scientist. He is known mostly for his works on computational materials discovery and crystal structure prediction. Oganov is currently a professor at Skolkovo Insitute of Science and Technology (Skoltech). Prior to that, he held a full professorship at the University of New York at Stony Brook. You may contact him by email: a.oganov@skoltech.ru

We are working with chemical compounds that go against common scientific reason. The basic rules of chemistry were long ago established by the conditions of our planet's surface, but when we change the conditions these rules are no longer valid. Matter in the universe mostly exists not in low pressure, like on Earth's surface, but at much higher levels. This applies to planetary cores, for example, where pressure levels often reach millions of atmospheres. If we want to understand the universe, we need to understand the chemistry of such high pressures. This way, new and stable compounds can be created and studied in a lab. Their unique composition and structure provide them with unusual qualities and various potential applications.

The pressure in the center of the Earth is almost 4 million atm, which is very high. The energy required to achieve such pressures exceeds the energies of the most potent chemical bonds. New rules of chemistry apply here; some metals stop behaving like metals, and vice versa. Oxygen, for example, becomes superconductive at 1 million atm.

One of the main constituents of Earth's mantle is magnesium oxide, which comprises about 10% of the planet's volume. We've predicted and confirmed experimentally that the pressure of around 1 million atm creates МgО2 instead. Whether it appears deep below the planet's surface or not, depends not only on pressure, but also on the oxidative potential of the environment as a whole. Perhaps Earth's mantle isn't suitable for this, but MgО2 will form in planets with proper oxidative qualities, instead of regular MgO. It will have different qualities, so the planetary processes that depend on specific properties of matter will develop in a different way.

All phenomena that define the evolution and the outlook of a planet depend on what happens deep below its crust. They define almost everything we know. For example, convection within the core creates a magnetic field. This field protects Earth from solar wind, a stream of charged particles capable of destroying all life.

Due to convection, heat is distributed evenly within the mantle. Earth's thermal profile, earthquakes, continental drift and ocean patterns, volcanoes and their archipelagoes, the composition of atmosphere, and the very existence of humankind depend on processes that happen below the surface. If chemistry changes, all these can proceed in an entirely different direction.

What happens on the surface of crystals and nano-particles is very interesting, and while some things might be benign, others are not. By studying bizarre chemistry, we can explain why many nano-materials are carcinogenic.

For example, nano-particles of silicon oxide have unpaired electrons, which makes them highly bondable. These particles are highly active, aggressive, and very oxidative; such qualities can explain their carcinogenic effect. Many health professionals consider oxidative stress to be a cause of cancer. That's why antioxidants like green tea or brightly colored fruits are very important to prevent the condition.

Silicosis, or severe irritation of lung tissue, is caused by prolonged exposure to powdered quartz, which often leads to cancer. This condition affects people who work at glass-making plants or in mines, or who simply live in the desert. American soldiers returning from Iraq experienced something akin to a lung cancer epidemic because of abundant sand.

We are close to understanding the origins of lung cancer caused by particles of silicon oxide and other minerals. Maybe our research will help to fight it. We already know that nano-particles behave differently if the temperature rises by about 500 degrees. But we still need to understand what can be done with this knowledge, because lung tissue obviously can't be heated up so high.

Our initial methods of high-pressure chemistry were aimed at material research. We found a new kind of manganese boride, a very hard and durable compound. Together with researchers from the University of Connecticut, we have developed several polymers that were later tested in experiments and will be used in flexible electronics.

Also, this research helps in creating generic medicines. Crystalline hydrates are molecular compounds and aren't governed by the original patents. This allows us to create new drugs. For example, we've designed and patented a new kind of drug for multiple sclerosis treatment. We took the drug in its original form and used it to design and experimentally verify its crystalline hydrate.

Thus, we can vary dissolution rates, which can increase a drug's potency. Using the results, we can help pharmaceutical companies to improve their own products and to gain a competitive edge. High prices are often the result of monopolization. With our innovation, this market can become more transparent and egalitarian.

Today, people from many countries are conducting research in bizarre chemistry. Almost 30% of my employees in our Moscow lab are from abroad, and a single project can involve scientists from my Long Island lab in the U.S., as well as from Moscow, China, and other countries.