Flanker fury: How the Sukhois blanked the Typhoons 12-0 in British skies 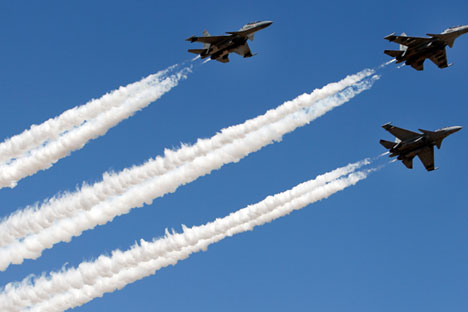 The Flanker’s legendary super-maneuverability is a key reason why it emerged out of the knife fight unscathed.

AP
By humiliating the RAF in its lair, the IAF has once again showed that its Sukhois easily outgun and outrun any fourth generation western jet fighter.

The Sukhoi Flanker has yet again emerged as the unchallenged wolf of the skies. During the 10-day Indradhanush exercise held in July in Lincolnshire, UK, Indian Air Force pilots flying the Su-30MKI humiliated the top aces of the RAF, blanking their latest Eurofighter Typhoon jets 12-0.

The IAF Sukhois were reportedly able to defeat the Typhoons not only in one-on-one combat, but also in situations where one IAF pilot was pitted against two Typhoons. Besides clobbering the RAF during within visual range (WVR) dogfights, the Sukhois also held an edge over the British jets in beyond visual range (BVR) combat though not in as dominating a manner. 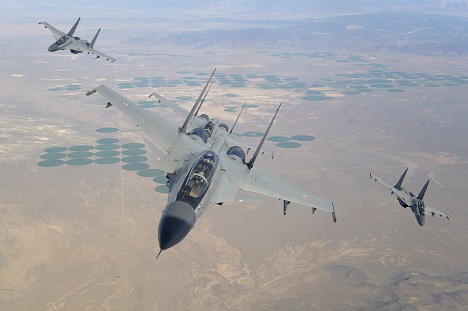 Aviation International News learns from informed sources with knowledge of the exercise that “in close combat, the thrust vector control on the heavier Flankers more than compensated for the greater thrust-to-weight ratio of the Typhoon”.

Experienced air combat analyst Vishnu Som explains: “The first week of the exercises pitted the Su-30 in a series of aerial dogfight scenarios. First, there were 1 v 1 encounters, where a single jet of each type engaged each other in WVR combat, firing simulated missiles to a range of two miles. The exercises progressed to 2 v 2 engagements with two Eurofighters taking on two Su-30s and 2 v 1 exercises where two Sukhois took on a single Typhoon and vice versa. Notably, in the exercise where a lone Su-30 was engaged by two Typhoons, the IAF jet emerged the victor 'shooting' down both 'enemy' jets.”

The Flanker’s legendary super-maneuverability is a key reason why it emerged out of the knife fight unscathed. “In all dog fighting exercises, IAF Sukhois were able to turn sharply into the extremely agile Typhoons using their thrust-vectored engines to keep the RAF jets locked in their sights,” Som writes.

Also, the Su-30's advanced Infrared Search and Track System (IRST), a passive sensor, which cannot be tracked, proved to be a distinct advantage for the IAF's pilots in close-combat maneuvering. “Both the IAF and RAF used the full capabilities of their onboard radars, albeit in training mode, which meant actual radar frequencies used in combat conditions were never exposed for confidentiality reasons. However, the detection ranges of the radars of both aircraft were not curtailed per se. This was air combat as close to the real thing as possible.”

Interestingly, while the UK’s Independent says the British deployed the “cream of the RAF”, Som says “the IAF did not deploy any senior pilots serving with its elite Tactics and Air Combat Development Establishment (TACDE)”.

Dismissing the Indian claims as “comical”, an RAF source told the Independent that they were clearly designed for the “domestic audience”. The source added: “There must have been some clouded recollection on the flights back to India, as the headlines of the Indian press bear no relation to the results of the tactical scenarios completed on the exercise in any shape or form.”

The 12-0 score must have stung real bad considering the British are yet to jettison their colonial attitudes towards former subjects, who are now wealthier and stronger, possessing a much larger military.

Now compare the RAF’s childish reaction to the USAF’s more balanced approach in the aftermath of their humiliation by the IAF in the Cope India air combat exercises held in 2004 and 2005.

Cope India 04 made headlines worldwide when Indian pilots flying upgraded – but 30 year old – MiG-21s and the comparatively less advanced Su-30MKs defeated the USAF’s F-15 Eagles 9-1. Here’s what USAF Colonel Greg Newbech said after the exercise: “What we’ve seen in the last two weeks is the IAF can stand toe-to-toe with the best air force in the world. I pity the pilot who has to face the IAF and chances the day to underestimate him; because he won’t be going home.”

The following year, at Cope India 2005, the USAF deployed several F-16s. The results of the drills were much similar to those of the previous year, with Indian pilots able to win most of the engagements in their latest Su-30MKIs.

Again, in 2008 at Exercise Red Flag held at Mountain Home AFB, known for its complex and realistic war gaming, not a single Su-30MKI fighter was 'shot down’ in close air combat missions. In 10-odd one-on-one engagements against USAF jets such as the F-15 and F-16, none of the Sukhois were even close to being shot down.

You get the picture. The IAF Sukhois have consistently beaten western aircraft in a range of environments – Gwalior, California and now Britain.

IAF Sukhois usually engage in simulated combat – particularly with western air forces – with their NIIP Bars radar in training mode. In this mode the radar operates with reduced performance and features. Russian and Indian officials have legitimate concerns about revealing too many details of this sophisticated sensor. At Red Flag 2008 a British spy plane had attempted to snoop on the Sukhoi’s radar but it had to return empty handed.

It is because of such spying – as well as to protect their data and tactics from air forces that it could one day possibly fly offensive missions against – that the IAF doesn’t permit its pilots to use the full spectrum of the Su-30’s capabilities.

The IAF also avoids BVR simulations for the same reason. It doesn’t allow the capabilities of its Russian made R-77 and R-73 air-to-air missiles to be simulated in exercises.

Indradhanush 2007, held at Waddington, UK, featured a similar combat scenario, with IAF Flankers versus the RAF Typhoon, with a support cast of Tornados and the Harriers. Here’s what India’s Ministry of Defence had to say about the outcome:

“The operational part of Exercise Indradhanush-2007 began with a series of 1 vs 1 air combat sorties… The RAF pilots were candid in their admission of the Su-30 MKI’s observed superior maneuvering in the air, just as they had studied, prepared and anticipated. The IAF pilots on their part were also visibly impressed by the Typhoon’s agility in the air.

“While it does not imply to say that the 1 vs 1 air combat sorties were meant for backslapping each other, it may be understood that in today’s aerial combat scenarios of BVR capabilities of air platforms, it is highly unlikely that any of the modern-day fighters will ever get into a situation that warrants extreme close air combat, as in the situation simulated in the 1 vs 1 sorties. With a ‘kill’ criterion of front-gun ranges being mostly under 1000 meters and a visual tracking envelope behind the target for only up to a 60-degree cone mostly for most fighter aircraft of the world, the unlikely scenario gets more exemplified.

“But the irony also lies in the fact that while there is a number of counter and counter-counter measures to make the modern missiles with claims of inescapable parameters redundant by using ‘chaff’ and other active/passive measures, a ‘gun kill’ is invariably a most certain kill. The pilots invariably begin honing their tracking and combat skills under such close combat situations.”

The MoD’s purely technical – and unbiased – report blows away the British claim that they fought with one hand tied behind their back, that is, the Typhoons were not allowed to use their BVR capabilities. For, the Sukhois – which have vastly superior BVR missiles – also flew under severe and similar handicaps.

Defense Industry Daily (DID) agrees: “Even in the modern missile age, most air-to-air kills have remained within visual range.”

According to DID, “Amidst the excitement of the aerial battles, the successful deployment of India’s aircraft using IAF aerial refuelling and logistics personnel might go unnoticed. From India’s point of view, however, these developments may be even more important than the results of the fighter match-ups in the air.”

The four Sukhoi air dominance fighters accompanied by an Ilyushin IL-78 aerial refueller, C-17 transporter and C-130 special operations aircraft flew from India to Saudi Arabia on to Athens before landing in Britain. The hopscotch itinerary – of nearly 10,000 km – served to show off India’s strategic reach capability, especially to the Saudis, who are now cooperating with India in combating Islamic terror, which is the Kingdom’s second largest export item after oil.

Indradhanush 2015 offered RAF pilots a rare chance to go up against some of the latest Russian-designed fighter jets. The British should count their blessings that the Indians allowed them joyrides in their Sukhois.

The takeaway for the British is that their newest jet fighter – which was built to take on the Flankers – is simply no match for the Russian jet. In fact, with the induction of the more advanced Su-35 Super Flanker in the Russian Air Force – and soon the Chinese air force – the Typhoon’s window of vulnerability will only widen.

As for the IAF, it should make sure all ‘kills’ by its pilots are verified and placed in the correct context. Indian pilots are historically not known to make tall claims. In the aftermath of previous wars, the Indian defence establishment has meticulously pieced together vast quantities of data from all sides in order to verify or debunk kills. If the claims are found to be inflated then the public needs to know too.

For, there’s no surer way to lose the next war than to live in delusion about your own strength.