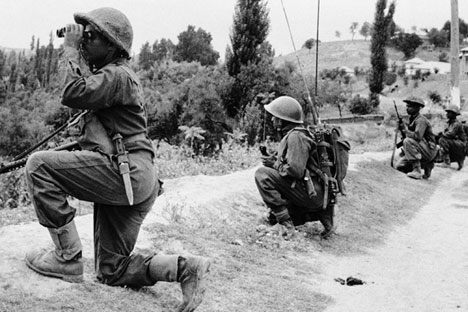 Indian Troops on the move in Kashmir against Guerrilla forces on Sep 6,1965.

AP
On the 50th anniversary of India’s 22-day war with Pakistan, we examine Russia’s role in the peace agreement, Shastri’s mysterious death, and why India agreed to end the war when it was close to a decisive victory.

In May 1964, Indian Defence Minister Yashwantrao Chavan made a visit to the Pentagon, the HQ of the American defence department. Chavan, who was trying to rapidly modernise the Indian military, requested the Americans to sell India the F-104 Starfighter – the most advanced jet fighter of that era.

Although the US had supplied the F-104 and the F-86 Sabres in large numbers – virtually free of cost – to Pakistan, India’s request was rebuffed in an extremely crude manner.

In his brilliant little book, ‘1965 War: The Inside Story’, former Maharashtra chief secretary R.D. Pradhan narrates what US Defence Secretary Robert McNamara told Chavan: “Mr Minister, your air force is like a museum. I wonder whether you are aware of the variety of aircraft in your air force. You are still operating with Hunters, Spitfires, Vampires, Liberators, Harvards – exotic names of World War II vintage. All these aircraft are only worthy of finding a place in a museum.”

McNamara suggested that until India disbanded that fleet, it was no use acquiring any sophisticated aircraft.

What the American secretary said was offensive – and true. Although the US did not offer any help, what India did with its antiquated planes and vintage tanks remains the stuff of legend. Pradhan says, “With that background, it was an exhilarating moment when some of those junk planes, such as the Mysteres, Vampires and Hunters performed brilliantly against Pakistan’s sophisticated F-86s. In fact, the indigenously built Gnat, a small beaver-like fighter, brought down several F-86s.”

The 1965 War remains memorable for two things. One was a monumental miscalculation by Pakistan. President Ayub Khan, egged on by his scheming and feckless Foreign Minister Zulfikar Ali Bhutto, sent a top-secret order to his army chief General Mohammed Musa: “As a general rule, Hindu morale would not stand for more than a couple of hard blows delivered at the right time and the right place. Such opportunities should therefore be sought and exploited.”

Secondly, India’s leadership – as it has done consistently over the past 2500 years – frittered away on the negotiating table what the soldiers won on the battlefield. Pradhan writes: “In a way, India’s leadership, out of its sense of restraint, fair play and endeavour to seek enduring peace and goodwill with the neighbour, seems to have missed opportunities to solve the problem.”

At the end of a bruising 22-day war, India held 1920 square kilometres of Pakistani territory while Pakistan only held 550 square kilometres of Indian land. The Haji Pir pass was also captured by Indian soldiers after an epic battle. And yet India surrendered everything at the Tashkent Declaration in January 1966.

The US, which was embroiled in a bloody war of its own in Vietnam, acted mostly through the United Nations. However, the defining western aim was to see their satellite Pakistan get through the war without getting battered. This view is amply summed by Chavan, who wrote about British Prime Minister Harold Wilson’s ceasefire proposal at a time when India had the upper hand: “I insisted on military advantages being maintained. The UK proposals look like a trap.”

As three divisions of the Indian Army were slicing across Pakistani defences and thundering across the Ichhogil canal to Lahore, Wilson sent a message to Prime Minister Lal Bahadur Shastri and Ayub Khan: “Both governments bear responsibility for the steady escalation which has subsequently occurred, and today’s attack in the Lahore area presents us with a completely new situation.”

Wilson’s message implied that India was as much to blame for the war on the subcontinent as Pakistan. “Shastri more or less brushed aside that message,” says Pradhan. “Bias on the part of Britain would rule out the UK from playing any effective role in events after the ceasefire.”

Russia, which was following the events with deep interest, maintained its traditional stand that Kashmir was part of India. Pradhan writes Moscow accepted the disturbances in Kashmir had been created by infiltrators from Pakistan.

Russia also backed India at the United Nations. K. Vijaykrishnan writes in ‘The Soviet Union and the India-Pakistan War, 1965’, “Support was available for India on some important technical points and objections India had raised,” he says. Russia supported the Indian position that the Security Council should only deal with "questions directly connected with the settlement of the armed conflict” and not drag in the Kashmir issue.

Fending off China was a trickier affair. Russia did not want an open confrontation with Beijing, but Moscow decided it would not remain a passive spectator if India had to battle on two fronts. According to Vijaykrishnan, during the thick of the conflict, India received a reassuring message from Russian Premier Alexei Kosygin indicating support in the event of a Chinese attack.

Sisir Gupta writes in ‘India and the International System’ that India was aware Russia would never like to see India humbled or weakened. “A strong and friendly India occupying a pre-eminent position in South Asia was very much a Soviet foreign policy interest. Notwithstanding the fluctuations in the Soviet attitude and the zig-zag nature of the course it pursued, there was throughout a broad assumption underlying Soviet policies towards South Asia, that India was the key factor in the region and that any policy which created distrust and dissension between the two countries was to be avoided.”

China got the message and backed off despite Pakistani appeals for help. Chinese strongman Mao Tse-Tung was reported to have told Ayub Khan that "if there is a nuclear war, it is Peking and not Rawalpindi that will be the target", writes G.W. Chaudhury in ‘India, Pakistan, Bangladesh and the Major Powers: Politics of a Divided Subcontinent’.

With the US disinterested in the conflict and the UK showing its true anti-India and pro-Pakistan colours, it was left to Russia to play honest broker.

It was after some initial hesitation that both India and Pakistan accepted the Russian offer. Ayub Khan later said that Pakistan went to Tashkent as it did not want to risk a veto by Moscow.

There was another reason for Pakistan’s eagerness for talks. According to Pradhan, “The continued presence of Indian troops on the east side of the Ichhogil canal, facing Lahore city, was hurting Pakistan’s pride.” The heat was clearly on Islamabad.

Before leaving for Tashkent, Shastri – who was hero-worshiped by Indian soldiers – had promised his victorious troops that he would not return the land captured from the enemy after so many sacrifices. But after six days of talks, Shastri proved once again that Indians are bad negotiators. He gave away everything.

Was Shastri feeling the pressure from the international community? Most likely not, but perhaps he felt – like his successor Indira Gandhi after the 1971 war – that showing leniency towards Pakistan would buy its goodwill.

If you were Shastri, you would dread having to face the Indian soldier back home. Hundreds of them had died while capturing the strategic Haji Pir pass, which if India had kept, would have forever nullified Pakistan’s advantage in Kashmir.

On the night of January 10, 1966, the diminutive Prime Minister but a giant among men died of a heart attack. It was his fourth cardiac seizure and was likely triggered by his anxiety at having to face an irate public and having to look into the eyes of his jawans – soldiers – whose hopes he had dashed.

There have been all sorts of conspiracy theories but the reality is that none of the major countries benefitted from his death. Russia had scored a spectacular diplomatic coup, America fully supported the Tashkent Agreement, and Pakistan was happy to get its land back.

That the Indian Prime Minister died of a heart attack comes from a most unlikely source. Shortly after Mikhail Gorbachev’s liberalisation policies in 1991, Soviet Land magazine in India published an account by an ex-KGB officer.

According to the former intelligence agent, the KGB was spying on both the Indian and Pakistani delegations in order to find out how much each country was willing to yield during the negotiations. When Shastri started getting a seizure, the KGB was listening but decided not to alert his aides because that would give away their game and lead to a diplomatic showdown with India.

Having dissected what transpired at the negotiating table, we need to discuss the prelude to Tashkent.

Although Pakistan was on the verge of being trounced – unlike in 1971 and 1999 when it really got hammered – India generously agreed to a ceasefire after repeated pleas from the major powers.

Why did India stop fighting when it had Pakistan reeling? Why did Chavan and Shastri, who swatted away western pressure and gave a free hand to the Indian military, cave in?

The problem was army chief Jayanto Nath Chaudhuri. The Kolkata-born general came from an affluent background and had become army chief purely on the back of family connections and pure luck. He was elevated following the resignation of another Sandhurst-educated general, Pran Nath Thapar, the army chief of the 1962 War.

Chaudhuri’s mentors were the Sandhurst educated British generals – who had utterly failed before the Germans and Japanese during World War II – and predictably he also lacked war fighting qualities. “He was so good on paper that Chavan often wondered how good he would be in warfare,” writes Pradhan.

Chavan mentions in his war diary that Chaudhuri would frequently lapse into depression. Each time the Indian army suffered a setback, the general would walk into the Defence Minister’s room, and Chavan had to give him a pep talk. Chaudhuri so completely lacked courage that Chavan often forced him to visit the front and personally take stock. 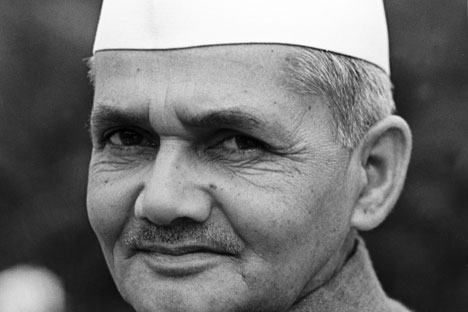 Pradhan writes, “On September 20 when the Prime Minister asked Chaudhuri whether India could expect to gain if the war continued for a few days more, he informed the PM that the army was coming to an end of its ammunition holdings and could not sustain fighting for much longer. Chaudhuri advised acceptance of the ceasefire proposal. It was later discovered in overall terms only 14-20 per cent of the Indian Army’s ammunition stock had been used up. At the moment of our greatest advantage the army chief’s non-comprehension of the intricacies of the long-range logistics deprived India of a decisive victory.”

In contrast, Pakistan had expended 80 per cent of its ammo. It had also lost 250 of its latest US-supplied tanks.

Chaudhuri was also criticised for his lack of daring. When the Pakistani cities of Sialkot and Lahore could have been easily taken after the dash and bravery shown by Indian troops, Chaudhuri told Shastri: “We must move with the caution and wisdom of an elephant. We will take them in God’s good time.”

In fact, when the Pakistan Army attacked in the Khem Kharan sector in Punjab, Chaudhuri ordered the Army Commander Harbaksh Singh to withdraw to a safer position. The commander refused, and what followed was the Battle of Assal Uttar – the greatest tank battle since Kursk in 1943. The Indian counter attack on the night of September 10 was so ferocious that by the morning they had knocked out 70 Pakistani tanks.

But what the Battle of Assal Uttar will be memorable for are the 25 enemy tanks found abandoned with their engines running and wireless sets on. It was the perfect metaphor for the plight of the Pakistan Army.

Had India kept its head, today we’d have a lot more to celebrate.