Takeaways for India from the Su-24 shoot down 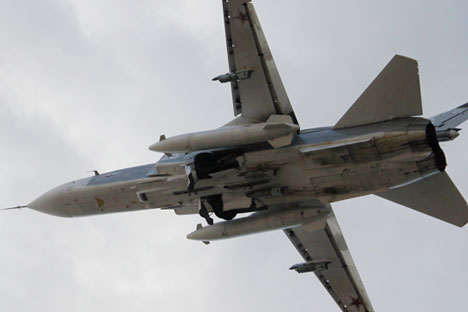 The primary takeaway for the Indian military from the shoot down of the Russian Su-24 is this: next time there’s a conflict, carry a big stick.

During the 1999 Kargil War India committed the blunder of not using overwhelming force early on. The result was that a military helicopter and a ground attack jet were brought down by shoulder fired missiles.

And yet when they decided to strike at ISIS and other US-backed terror groups in Syria, the Russians despatched only a handful of Su-27s and Su-30s to provide top cover for their ground attacks jets. All the high-octane gear mentioned above was thousands of kilometres away from the Middle East cauldron. Incredibly, the Su-34s were not even equipped with air-to-air missiles. Clearly, the Russians underestimated NATO’s ability to “stab in the back”.

Turkey exploited this window of weakness and ambushed the Su-24 by using information – most likely provided by the Americans – about the jet’s flight paths. This was information that the Russian Air Force had provided the US Air Force in advance in order to avoid accidents.

The Turkish F-16s would not have dared to attack the Russian aircraft had there been enough Sukhois or MiGs patrolling over the battle zone. For, the F-16 Falcon cannot survive an encounter with an Su-30 Flanker or MiG-29 Fulcrum. While the F-16 has a service ceiling of 50,000 ft, both the Flanker and Fulcrum can cruise at nearly 60,000 ft, and are armed with much better air-to-air Vympel missiles. Also, the MiG-29 can climb a lot faster than an F-16, leaving the American jet panting for breath in a dogfight.

The potency of Russian fighter jets was proved during the Kargil War when Pakistan Air Force (PAF) F-16s fled the battle zone the moment Indian Air Force (IAF) MiG-29s achieved missile lock on them. In the report ‘Airpower at 18,000 feet: IAF in the Kargil War’ published by the Carnegie Endowment for International Peace, Benjamin Lambeth says that because IAF MiG-29s were airborne on combat air patrol, PAF F-16s to the west typically maintained a safe distance of 16-32 km on the Pakistani side of the border.

According to Strategy Page, “Analyses by Pakistani experts revealed that when the rubber met the road, the PAF simply refused to play any part in support of the Pakistan Army, angering the latter. While PAF fighters did fly combat air patrols during the conflict, they stayed well within Pakistani air space. On occasions, IAF MiG-29s armed with the deadly R-77 beyond visual range air-to-air missiles were able to lock on to PAF F-16s, forcing the latter to disengage.”

In an eerie similarity to Kargil 1999, the Russian pilots who ejected over Syria were shot at by pro-Turkey terrorists from the ground, leading to the death of one of them. That the surviving pilot escaped a horrible death was solely because of the Syrian Army, which led a daring rescue operation into terrorist infested territory.

If you have force, don’t hold back

Sun Tzu, the sixth century CE Chinese strategist, wrote in the Art of War that overwhelming superiority is a must before you attack the enemy. Bravery, while a desirable quality, is not something one should rely on to win battles. That would be utter foolishness. “He wins his battles by making no mistakes,” writes Sun Tzu. “Making no mistakes is what establishes the certainty of victory, for it means conquering an enemy that is already defeated.”

When the mighty Russian Army (Red Army) reached the outskirts of Berlin in April 1945, Germany was already defeated and the US and Russia had already decided the new map of Europe. But that didn’t mean the Russians took it easy.

Here’s what General Georgy Zhukov threw at the Germans during the final Battle of Berlin: 6,250 tanks and self-propelled guns, 7,500 aircraft and 41,600 artillery pieces. The Germans had nothing to match these numbers but Zhukov took no chances. The result was a quick victory that quickly destroyed the resolve of the Germans and prevented the entire city from falling into the hands of the Americans, which was what the German high command wanted. It’s perplexing why modern day Russian generals did not follow the time-tested strategy of deploying maximum firepower against the enemy.

Russia has since upped the quantum of forces involved in the war in Syria. More Su-27s and Su-30s have been despatched to the battlefield theatre to provide top cover to Russian ground attack jets along with strategic bombers that were built to strike at hardened NATO targets. As you can imagine, these large bombers are showing ISIS and the American-backed terror groups a glimpse of hell.

The Su-34 multirole jets have also been equipped with both short and medium-range air-to-air missiles capable of hitting targets within a 60 km range, said Russian Aerospace Forces Colonel Igor Klimov. This marks the first time the planes will carry such weaponry in the Russian anti-terror campaign in Syria.

More ominously, the S-400 Triumf missile has been despatched to the region, with the system now tracking the skies from both land and the sea (via the battle cruiser Moskva). The dreaded S-400 is a key part of Russia's anti-aircraft defence and the entire system can be set up for use in five to 10 minutes. It has a maximum range of 400 km, bringing most of southern Turkey within range of Russian fire.

The upshot of all this enhanced Russian airpower: Turkey has cancelled its military flights in Syria.

Hopefully, India’s military is paying heed. If or when India goes to war, whether against Pakistan or any other country, it should have sufficient assets in the air so that its ground attack jets won’t be ambushed. For, what use is having the world’s fourth largest army and air force if you cannot stun the enemy with the first blow? Why wait for battle attrition and loss of lives before you decide to bring in the heavy cavalry? It’s counter-intuitive and yet India acted with reserve initially in Kargil as did Russia in Syria.

Over the next five years, India is set to spend more than $100 billion on modernising and expanding its armed forces. Some of the new weapons platforms are truly scary – nuclear attack submarines, ICBMs, IRBMs, SLBMs, cruise missiles and hundreds of artillery pieces. With this kind of high-octane hardware, New Delhi should finally shed its historic reticence and attack with disproportionate force early on in any future conflict.