As AgustaWestland goes down, Mi-17 gets a Mayday call 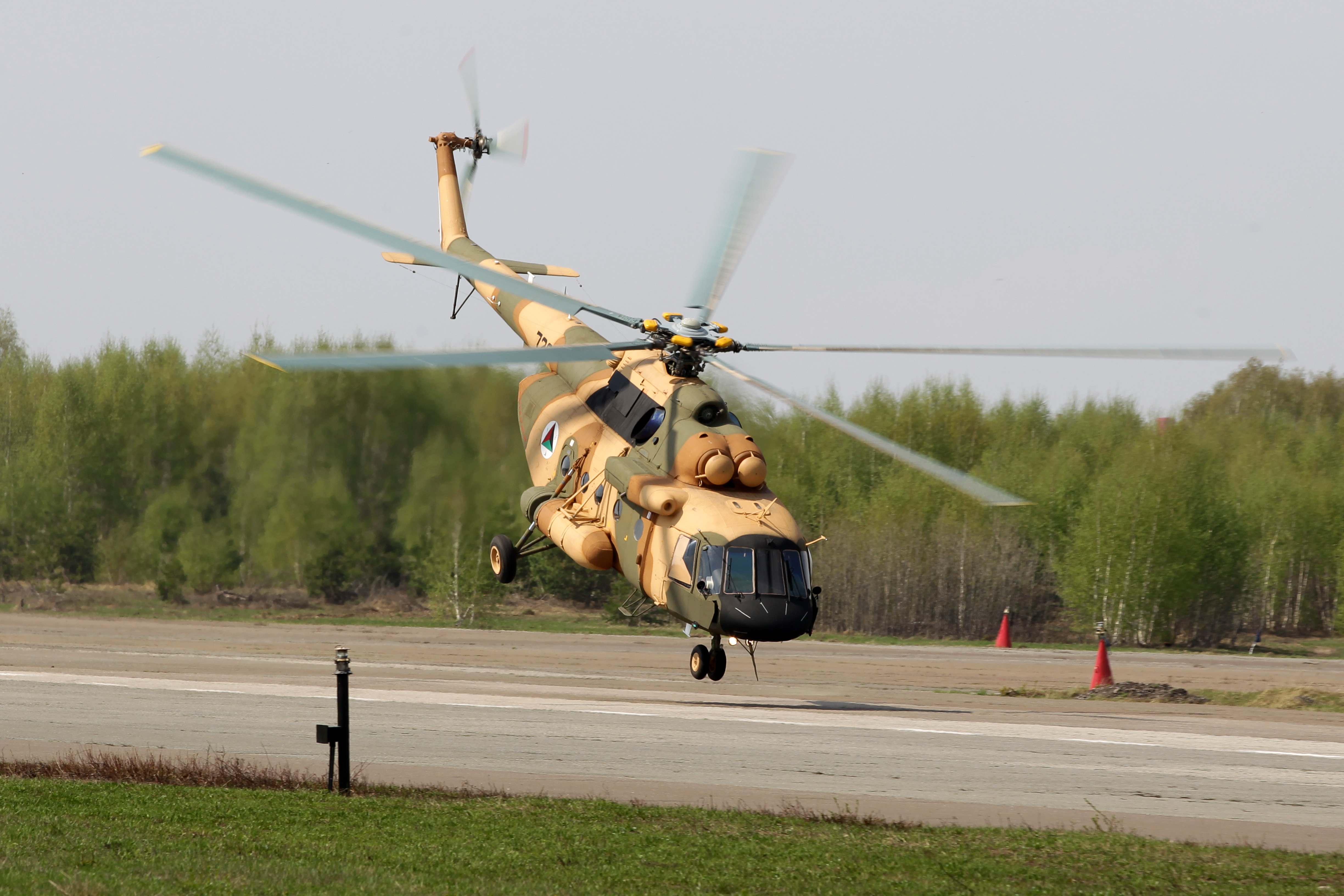 A Mi-17V-5 helicopter is demonstrated at the testing facility of the OAO Kazan Helicopter Plant, part of the Helicopters of Russia, a Russian helicopter building holding.

Maksim Bogodvid/RIA Novosti
The AgustaWestland scandal was completely avoidable as the replacement for India’s VVIP transport helicopter was available all along within the country in the form of the Russian Mi-17.

To understand how vulnerable helicopters are to shoulder fired missiles, click here to see the devastating impact of a Russian Strela 2M on a US-made Cobra of the Turkish military. It takes the Kurdish missile team about 15 seconds to achieve visual target acquisition, after which it takes the missile less than five seconds to smash into the target.

The Strela-2M has a range of 4200 metres, which comes close to the AgustaWestland AW101 helicopter’s maximum flight ceiling of 4500 metres. In comparison, the Russian Mi-17V5 helicopter has a service ceiling of 6000 metres.

Given the vulnerability of relatively slow and low flying helicopters to shoulder fired missiles, India’s governing elites should have picked the more survivable Mi-17 as their transport helicopter with their eyes closed. India has acquired 151 Mi-17s for transport duties, including ferrying senior military commanders.

Safety rather than luxury is the decisive factor when it comes to transporting the nation’s leadership. The Mi-17 has a heavily armoured skin which makes it highly resistant to sniper rifle fire and shoulder-fired heat seeking missiles – the favourite weapons of terrorists and assassins.

Whoever ultimately decided to pick the Italian helicopter, their choice was clearly motivated by reasons other than professional. In fact, it was a cynical decision made with complete disregard for human life.

The Mi-17V5 is the export model of the Mi-8 – the most produced and exported helicopter in the world. The chopper can be used as both a transport and gunship helicopter. It not only has an auxiliary engine but also an extra door on the right side, improving survivability.

The Russian chopper is nearly twice the size and weight of the equivalent American model, the Bell UH-1, although it only hauls about 50 per cent more cargo. But the additional weight constitutes a thicker skin and overall more protection from small arms fire. In 2013 a Syrian Air Force Mi-17 was hit by an air-to-air missile fired by a Turkish Air Force fighter aircraft but the helicopter survived long enough for both Syrian pilots to bail out in their own airspace and avoid capture. (Now compare that to the spectacular destruction of the Turkish Cobra after it was hit by the Strela. The US made chopper went out of control, caught fire and came apart in midair, killing both pilots.)

According to Strategy Page, the Mi-17’s success is due to the fact the Russians “just kept adding better engines and electronics” to the chopper’s basic frame. “If you want mobility for the least cost you get the Mi-17,” it says.

Take me to the Kremlin

The Russian approach is practical – let's not re-invent the wheel on VIP safety. The Mi-17 (Mi-8M in Russia) continues to be the transport helicopter of choice, with President Vladimir Putin using it for his morning commute to the Kremlin. The presidential helicopters are outfitted with elongated external fuel tanks, additional auxiliary power units, antennas farms and infrared countermeasures.

According to India’s Defence Ministry, the Mi-17 wasn’t luxurious enough for senior leaders, and hence AgustaWestland was picked. Putin works in the splendour of the Kremlin plus he’s the leader of the second most powerful country in the world, and yet he’s comfortable shuttling around in the 40-year-old Mi-17/Mi-8.

The Russian president’s helo isn’t such a bad ride. Alpha Foxtrot says it comes with large club chairs, high-end wood trims, additional sofa seating, a restroom and in-flight communications and video systems. “Additionally, the rear clam shell doors that are such a touted feature are retained and cargo or luggage can be loaded through these doors into a rear compartment without disturbing those seated inside or are in the process of boarding the forward cabin.”

US presidents, who require even more protection, probably because they make more enemies, fly in rather utilitarian Sikorskys. While America’s primary presidential aircraft is Air Force One, their main helicopter is Marine One.

The current Marine One helicopters are derivatives of the Sikorsky Sea King helicopter, which was phased out of the US military during the 1990s. "Those currently flying were built somewhere around 1975, making them only 14 years younger than President Obama himself," says the Daily Beast.

President Barack Obama is the leader of the richest country in the world and yet the Marine Corps prefers security over luxury. They want "a helicopter that could fend off a terrorist shoulder-fired surface to air missile and keep functioning in the wake of a nuclear attack on Washington, DC".

Westland’s sordid past in India

The money came from British aid to India – amounting to £115 million annually – but it was tied to the purchase of the helicopters.

According to Eastern Eye, initially Rajiv Gandhi “was very unhappy at the sloppy way in which the Indian Air Force had carried out its evaluation. As a result of this, two officers had lost their jobs.”

As Indian resistance to Westland continued, the British foreign secretary Geoffrey Howe produced a “Let’s Punish India” confidential memo on May 13, 1985, for Thatcher. The British decided to link aid to the purchase of helicopters. Says Eastern Eye: “Aid did not mean India could use the money as it saw fit. It had to use the funds to prop up British jobs and industry – even if the goods supplied were faulty.”

“Norman Tebbit, the trade and industry Secretary, was also all for putting the boot into India. His memo of May 21, 1985, read: “I have seen Geoffrey Howe’s minute of 13 May. I agree that we should now think of the consequences of the WG30 contract not proceeding. ... I share Geoffrey Howe’s view that there should be a reduction in the Indian programme for 1985/86 without jeopardising normal commercial relation and avoiding a major row.”

Rajiv Gandhi finally buckled and awarded Westland the contract. But the helicopters were an utter disaster. Soon after their arrival in India in 1987, two crashed, killing 10 people. They proved to be unsuited to the tropical climate, needed constant servicing and repairs, and were flown only sporadically. Only 41 Westlands were produced before their assembly line in England closed in 1990-91 as the platforms proved to be technically unsound.

“Three decades later, India’s Westland-30 fleet lies rotting in crates in Mumbai after the deal to sell them as scrap to a UK-based aviation company too collapsed in a further embarrassment to the beleaguered Congress party that acquired the dud machines,” says Bedi.

Hundreds of millions of dollars and countless man hours have been wasted in this needless exercise for a VVIP helicopter. Air force commanders, senior politicians and seedy middlemen have walked away with tens of millions of dollars in bribes. Like the Westland helicopters of the 1980s, the modern AgustaWestland choppers are also parked out in the sun, at the Palam airbase in Delhi. The pilots who were trained to fly the machines have moved to other assignments.

Meanwhile, India’s VVIPs have kept on flying, with the political leadership drawing six helicopters from the IAF’s fleet of 151 Mi-17s.

Had this been done 10 years ago, it would have saved the country so much trouble.