Is America trying to embrace or contain India? 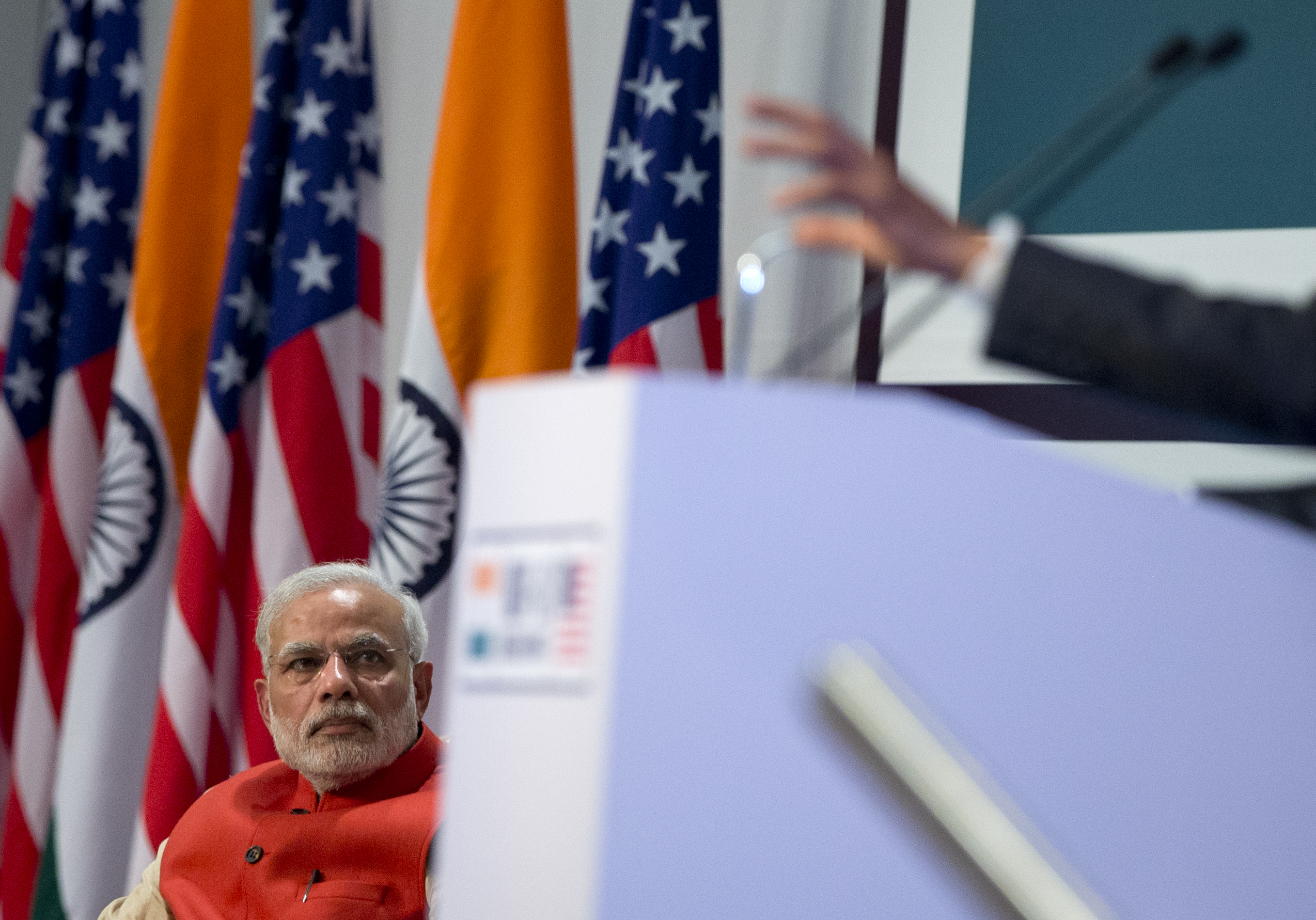 The reason India is moving westward is China.

AP
American lawmakers may be fawning over Narendra Modi, but even the rock star Prime Minister cannot change the reality that India-US ties lack a strong foundation.

In 1893, an Indian visitor to Chicago got a standing ovation lasting an unprecedented five minutes when he began his address with the words, "Sisters and brothers of America!" Today, the legendary Swami Vivekananda is long forgotten in America. It remains to be seen how long the US will remember Prime Minister Narendra Modi, who received nine standing ovations and 33 applauses during his address to the US Houses of Congress. Here’s a hint: less than a week after the speech, American lawmakers rejected a Bill to recognise India as a strategic and defence partner.

Indians are an easily pleased people. Among them, the Macaulayites – a class of people who are Indian in look but English in outlook – are conditioned by centuries of slavery to be grateful for a pat on the back from their former masters.

Most Indians do not know their history and few learn from them, repeating the same mistakes of their ancestors. Time and time again when foreigners were defeated on the battlefield, they sweet talked their way out of trouble and returned to infiltrate India. Foreign invaders like Muhammad bin Qasim, (who stormed Sindh in 712) Muhammad bin Ghori (who took Delhi in 1192) or the British (who colonised India in the 19th century) would never have succeeded had the Indian political and military leadership spurned their offers of friendship and truce.

The point is how easily Indians are falling for America’s tired lines, believing the US has finally ditched Pakistan and embraced India as their new best friend. All the past episodes of humiliation (the denial of a visa to Modi and the strip search of diplomat Devyani Khobragade being the most glaring) are forgotten.

To be sure, America is not an enemy – at least not in the classic sense. But the undeniable truth about the US is that it doesn't want any country to grow powerful and challenge it. India is no exception. America’s embrace may well be a containment strategy. Now that India’s economy has attained critical mass and the country has outgrown the hyphenation with Pakistan, the US is seeking to hyphenate it yet again – this time with China.

When India launched the ‘Chandrayaan’ lunar probe and later the ‘Mangalyaan’ Mars orbiter, the western media labelled it as the Asian version of the space race. Similarly, the economies of the two Asian giants are supposed to be competing despite the fact that the Chinese GDP is several times bigger than India’s.

This constant bracketing with China is clearly meant to spook India. A gaggle of American think tanks is talking about how India and the US, the two “great” democracies, can jointly tackle the “menace” of the undemocratic Dragon. And it seems India is taking the bait.

Shockingly, New Delhi does not recognise its own strength nor does the country’s leadership aspire for India to be a country with the same status as the US, Russia or China. “Unfortunately, the idea that it need not ‘align’ with anybody does not even occur to India’s mandarins, as a result of an institutionalised inferiority complex,” writes Rajeev Srinivasan in DNA.

Stab in the back

America’s commitment towards India can be tested by how far it is willing to move away from Pakistan. In this backdrop, let’s not forget the US is the inheritor of Britain’s legacy of global domination. The British passed the baton of hegemony to their Anglo-Saxon cousins across the Atlantic after the Germans and Japanese broke the back of the British Empire.

Pakistan was midwifed by the British for two reasons. One, it did not want India to be a major power after independence. Two, as a launch pad for a covert war directed at Russia’s soft underbelly in Central Asia. Pakistan was handed over to the US, which has propped up the country over the decades with generous doses of cash and weapons.

The more than $30 billion in aid provided to Islamabad has all been diverted to make nuclear weapons. The US always knew what the Pakistani generals were up to in their nuclear underground. Washington also backs ‘jehadi’ forces around the world and unleashes them against countries it wants to destabilise. The Americans have no problems with ‘jehadis’ as long as they attack India, Russia and China, anyone but the West.

While America’s executive branch is going full tilt in a bid to secure India’s friendship, there are other powerful interests highly inimical towards New Delhi.

Perhaps the most virulent opponents of India in the US are the highly influential New York Times and Washington Post. These two Pentagon mouthpieces continue to see India through Cold War as well as colonial lenses. One can detect a tone of talking down to Indians in their editorials.

In a piece titled 'No Exceptions for a Nuclear India', the New York Times’ Editorial board launches into a vicious attack on India, virtually implying it is India – rather than Pakistan – that is a nuclear rogue state. Blaming India for Pakistan's runaway nuclear programme, it says America’s "relationship with India rests on a dangerous bargain".

The paper adds: "For years, the United States has sought to bend the rules for India’s nuclear program to maintain India’s cooperation on trade and to counter China’s growing influence. In 2008, President George W. Bush signed a civilian nuclear deal with India that allowed it to trade in nuclear materials. This has encouraged Pakistan to keep expanding a nuclear weapons program that is already the fastest growing in the world."

It says if India gains membership, (to the Nuclear Suppliers Group)  it would be in a position to keep Pakistan, which has also applied for membership, from gaining membership. “That could give Pakistan, which at one time provided nuclear technology to North Korea and Iran, new incentives to misbehave."

The hacks at the NYT probably do not realise Pakistan's nuclear ambitions predate – and are independent of – India's weapons programme. Plus, it is likely that between the two South Asian neighbours, it is Pakistan that first had a nuclear arsenal. According to former Indian Army chief General K.S. Sundarji, in the late 1980s, when India kept its nuclear cores separate from the triggers, Pakistan’s Islamic Bomb was kept ready to be air dropped by its F-16s.

Again, blaming India for the South Asian nuclear race is disingenuous because the two countries that facilitated the Islamic Bomb and Pakistan’s ballistic missile programme are members of the Nuclear Suppliers Group (NSG) and the Missile Technology Control Regime (MTCR). First up, it is China that provided – way back in 1966 – an export model to Islamabad and later in 1990 tested the first Islamic Bomb in the Lop Nor desert.

The US knew about it but the Ronald Reagan administration looked the other way and instead gave billions of dollars in aid to Pakistan. So is it any surprise that a day after rejecting India’s special status Bill, the US Senate approved $800 million in funding for Pakistan. That’s free cash to buy more F-16s and crank out more battlefield nukes.

When something is too good to be true, it probably isn’t. Just rewind to Modi’s November 2014 address to the Australian Parliament. The Sydney Morning Herald reports that watching the Indian Prime Minister speak was like watching “a rock star perform” and that Modi had the “normally rowdy House of Representatives hypnotised”.

Did Modi’s speech change Australian views of India for the better? Well, earlier this month the management of Australia’s ANZ Bank described its former client industrialist Pankaj Oswal and his wife as “Indians with no moral compass”.

Similarly, the adulation Modi received in America could well be insincere. Let’s not forget that the US Congress is not an august body of scientists but a bunch of politicians who habitually act like everyone’s best friend.

There seems to be a concerted effort in the western – especially the Anglo-American – world to pry away India from the BRICS group. The appointment of Indian origin ambassadors by the US and Canada, as well as Australia, is too much of coincidence at such a critical juncture in history when there is a global realignment of alliances.

An alliance with the US would not really be an alliance because the US wants sidekicks, not partners. On the other hand, India is an equal member of the BRICS group which, despite the economic troubles of Russia and China and the alleged infiltration of Brazil by the US, is still a leading global player. India, historically sensitive to racism and colonialism, has welcomed the emergence of the BRICS as a counterweight to the West’s new agenda of another round of colonialism.

The reason India is moving westward is China. Beijing seems to be holding on to Pakistan for dear life and opposing India in every area – anti-terror, NSG, you name it. Indian warships are now conducting exercises in Beijing’s backyard, in the South China Sea.

But there’s another side to the India-China equation. Beijing has ended its support to separatist movements in India. Bilateral trade now tops $80 billion and is growing at a fast clip, largely in favour of China. Both countries even conduct joint military exercises.

The sticking point is the border dispute. If Russia can get China and India to sign a landmark border agreement and demilitarise the Himalayan border, it would have a bigger impact on the globe than the 1978 Camp David Agreement. That pact took place between two bitter opponents – Israel and Egypt – because US President Jimmy Carter kept the talks going for 14 months.

So far, Russia – at least on the surface – hasn’t done enough to get China and India to the negotiating table. Perhaps Moscow’s attention is focussed on the crises in Ukraine, Syria and Europe. But it should now concentrate on peace between the world’s two largest nations. Russia has settled its own disputed border with China and that experience could come handy for everyone involved.

The alternative is that India and China will continue to drift apart from each other. Beijing is also involved in a major standoff with the US military in the Pacific Ocean and the South China Sea. It’s the perfect recipe for tensions to spill into direct conflict. That would very likely put BRICS on ice – and lead to the collapse of a platform that Russia was instrumental in constructing.