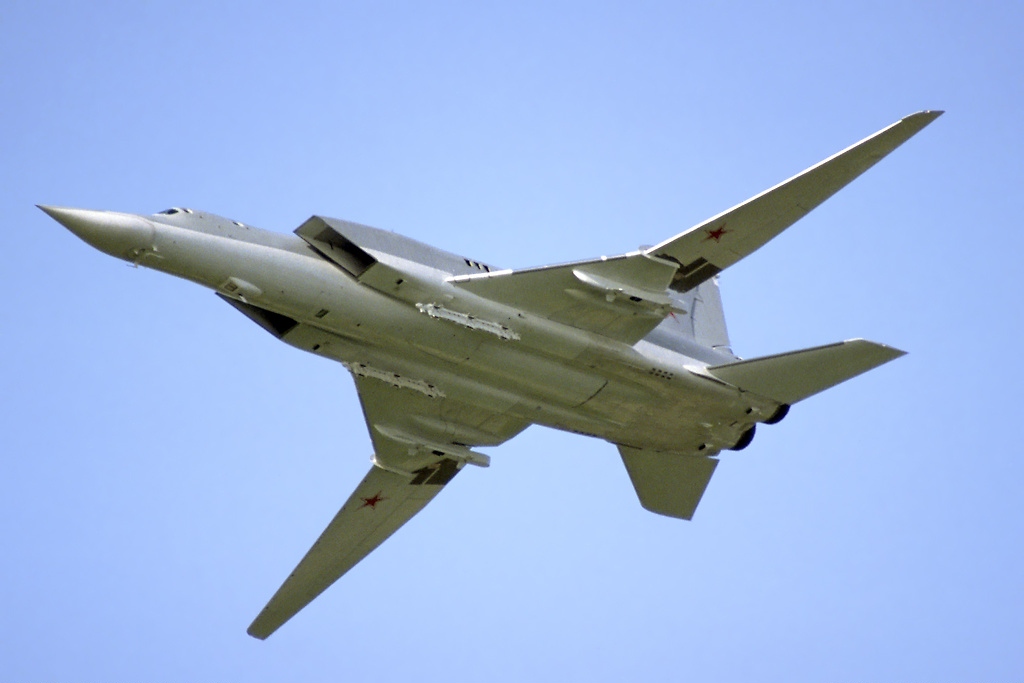 Anthony Noble/wikipedia.org
Lacking strategic vision, the Indian Air Force remains content to operate at the theatre level, but perhaps the fearsome Cold Warrior from Russia can help change that mindset.

The Indian Air Force has a variety of specialised fighters, ground attack jets and multirole aircraft in its fleet, but a strategic bomber has never figured in its war plans. According to the Russian wire service Interfax, that could change as India’s Ministry of Defence has reportedly sought to buy four Tupolev Tu-22M3 maritime strike bombers from Russia.

This isn’t the first time reports have surfaced that India is interested in acquiring this fearsome Cold Warrior – codenamed Backfire by NATO. According to the Federation of American scientists, “In December 1999 it was announced that India would lease four Tu-22M3 Backfire bombers, with the aircraft slated to arrive in India as early as June 2000.” They never did.

However, the first time the Backfire was set to fly into the subcontinent was in mid-1971 when Russia offered it as a strategic bomber. However, Air Chief Marshal P.C. Lal rejected the offer.

Defence analyst Bharat Karnad said, the “reasons trotted out verged on the farcical”. Karnad explains: “As Wing Commander (later Air Marshal) C.V. Gole, member of the Air Marshal Shivdev Singh Mission to Moscow and test pilot, who flew the Tu-22(M) informed me, he was appalled by the fact that he had to be winched up into the cockpit, and that the plane would have to take off from as far east as Bareilly to reach cruising altitude over Pakistan!”

Although the Backfire has been creating panic in American carrier groups for decades (the Chinese have also tried hard to buy the bomber or its design blueprints), which is an indication of its utility, the IAF has refused to accept what has been offered to it on a platter. It prefers to remain bogged down at the theatre level while steadfastly refusing to grow a strategic wing.

To be sure, the Backfire is a completely different species of aircraft compared with the IAF’s current fleet, and a doctrinal transplant would have to happen before the IAF brass can envision a role for a long-range strike bomber.

The Tu-22M is an extremely large aircraft flown by a four-man crew of a pilot, co-pilot, navigator and weapon systems operator. With its phenomenal combat range of 2400 km, and a blistering speed of over 2300 kph (faster than most jet fighters), the Tu-22M is ideal for targeting aircraft carriers and large ships. Russian tests reveal that when a shaped charge warhead weighing 1000 kg was used in the Kh-22 missile, the resulting hole measured 16 ft in diameter and 40 ft deep. Not even the largest US Navy CVNs can survive such an impact, and at the very least will be out of commission of months.

The bomber is designed to take off from secure inland bases, be vectored towards US aircraft carrier groups and fire its complement of up to six – often nuclear-tipped – cruise missiles from safe standoff distances.

The Backfire’s primary weapon is the supersonic Raduga Kh-22 cruise missile. In high-altitude mode, it climbs to the edge of space (89,000 ft) and makes a near hypersonic speed dive towards its target. In low-altitude mode, it climbs to 39,000 ft (higher than most commercial airliners) and makes a shallow dive at Mach 3.5, making the final approach at an altitude under 1600 ft.

Bill Sweetman and Bill Gunston write in ‘Soviet Air Power’ that the Kh-22 missile could be “programmed to enter the correct Pentagon window”. In fact, during the 1980s, Russian Naval Aviation was so sure about the accuracy of these missiles that the Backfire carried only one Kh-22, armed with a nuclear warhead.

Today’s Backfires are also equipped with the more advanced Kh-15. This missile climbs to an astounding 130,000 ft and then dives in on the target, accelerating to Mach 5, which makes it the world’s fastest aircraft-launched missile.

Just like the MiG-25 spooked western air force pilots of a previous generation, the Backfire was a big scare word in western military circles during the 1970s. American experts involved in arms limitation talks believed it was an intercontinental strategic bomber. Russian secrecy about the aircraft’s capabilities added to the speculation, leading American intelligence and US aircraft manufacturers (for obvious reasons) to suggest inflated ranges. This led to fears that the Backfire could strike the continental US.

However, even when the Russians added in-flight refuelling capability, the Backfire wasn’t intended to strike the US, but rather its naval assets in the open sea. Russian Naval Aviation strategists envisioned up to a hundred Tu-22M bombers making a pack attack against US Navy carrier battle groups in the event of war.

Built at the peak of the Cold War when speed, payload and range mattered more than cost, the heavy Backfire is expensive to operate and maintain. The general consensus was that deploying it against high value assets alone makes sense. However, Russia used it with devastating effect against the Afghan Mujahideen in the 1980s, and in the 2008 Georgian War, with its iconic moment when Georgia’s tie-chewing President Mikheil Saakashvili runs for cover as Russian bombers fly overhead.

Again, in the ongoing conflict in Syria, Backfires have rained freefall bombs, destroying Daesh assets as well as US-backed terror groups. These strikes have severely degraded Daesh strength in the region.

Since the IAF has at least 400 attack aircraft, including the Sukhoi Su-30MKI, MiG-29 and Mirage-2000, that have Pakistan sorted, deploying the Backfire against Pakistan would be a huge overkill. Using limited numbers against Chinese land targets would be suicidal as Beijing has a robust air defence network bolstered by the Russian S-300 anti-aircraft missile and its Chinese knockoffs.

The Backfire’s only conceivable deployment in India is as a maritime strike bomber against People’s Liberation Army Navy (PLAN) assets, especially in the backdrop of growing Chinese naval activity in the Indian Ocean.

Backfires operating from the Thanjavur Air Force Base in southern India – and armed with the 300 km range BrahMos – can comfortably strike naval assets up to Seychelles. They can also be used to target PLAN vessels operating in the South China Sea. The bomber’s ferry of 6800 km means it can reach Darwin, Australia, without aerial refuelling. Clearly, such an aircraft would be a huge force multiplier for India.

If the media reports about India wanting a limited number of just four Backfires are true, then it would suggest they would be deployed in a maritime – rather than strategic – strike role. The bombers are equipped to receive data directly from spy satellites monitoring the oceans. India, which has a constellation of ocean survey and spy satellites, can access real time satellite intelligence and despatch the Backfires on ship hunting missions. The bombers can also be guided by scout aircraft.

While the IAF’s timidity in adopting a strategic role is a likely reason for the repeated rejection of the Backfire, another factor could be forces rivalry. Air forces are highly resistant to strategic bombing being done by the navy or army. The Tu-22M being a specialised maritime strike bomber, it could – in the IAF’s view – be the beginning of the navy’s strategic air arm. The air force clearly doesn’t want the Indian Navy poaching on its turf. In this backdrop, chances are the IAF will find another farcical excuse to scuttle Backfire talks.

The Russian bomber is certainly a game changer, but it doesn’t mean India should rush headlong into a deal. In terms of size, firepower and reach, it dwarfs everything in India’s air arm, but it should not be forgotten that the Tu-22M is a 40 year old design. It last rolled off the assembly lines in 1993 and the aircraft is well out of guarantee, so the delivery of spares might be an issue.

Flight Global reports that in 1991 the Tu-22M mission-capable rate was just 30-40 per cent, although it was not really a representative year because that’s when the Soviet command economy had collapsed.

India should have bought these aircraft cheap as chips when the Soviet Union dissolved and Moscow was wondering what to do with 300 surplus Backfires. But costs aside, having a nascent fleet comprising just four bombers would still be a good idea as it would give India a rare glimpse into the world of strategic airpower.

During the Cold War, only two organisations in the West had got the Backfire’s range right. The first was US aircraft maker McDonnell Douglas and the other was Flight International, where Sweetman, the defence analyst worked. Years later, in 1992, the Russians brought the Tu-22M to the Farnborough International Air Show, along with a one-page handout. According to Sweetman, “We’d hit the fuel capacity within 5 per cent.”

When Flight International had published the Backfire’s range, an engineer from McDonnell Douglas had called them, wondering how the magazine had hit the same numbers his team had. Sweetman explains: “Later, I found out why that McDonnell Douglas guy was so surprised. His team had been working for what he preferred to call the Culinary Institute of America, which was quarrelling with the US Air Force. The Air Force claimed the Backfire had intercontinental range; the CIA said it could make it with inflight refuelling but could never get back.

“US Air Force intelligence boss Major General George Keegan threatened to mess with the F-15 programme – a huge McDonnell Douglas contract – if McDonnell Douglas analysts, the ones feeding the CIA, didn’t find more fuel tanks in the Russian bomber so that their conclusions matched his. CEO Sanford “Sandy” McDonnell stood his ground. Keegan went on to start the Great Space Laser Panic of ’79. And the Tu-22M did what it did best, which wasn’t strategic bombing but scaring the bejeesus out of carrier groups.”