Let’s all move to Moscow-on-Thames 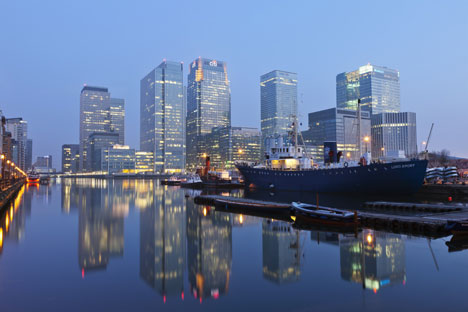 Russians only make up 3.1 percent of the total number of buyers, but their purchases are focused strongly on Central London. Source: AFP/ East News.

Russians are among the leaders in UK property investment.

Russians are the third most active investors in new property developments in London. Last year they spent more than $109 million, which is a quarter more than what was spent in 2011.

The only people to spend more on homes in London were those from Singapore and Hong Kong, according to market research conducted by British estate agents at Knight Frank consultancy.

Medvedev to meet with British premier, Swiss president in Davos

“The research did not indicate the average transaction price paid by Russian buyers,” company representative Natalya Shevtsova told Rossiyskaya Gazeta. “For Asian buyers, the average price is £680,000 [$1.08 million]. For Russians, that figure is slightly higher.”

When it comes to the London market, Russians are known more for their extravagance than they are for their numbers. Russians only make up 3.1 percent of the total number of buyers, but their purchases are focused strongly on Central London.

Yelena Yurgeneva, an expert on the English property market, said that Russians prefer to buy in the most expensive parts of town. In fact, the study confirms that location was the most important factor for foreign investors looking to buy property in London, with Zones 1 and 2 (the city center and its immediate periphery) being the most popular area. Proximity to an Underground (metro) station was also a price factor. In addition, there is continual demand for properties that overlook the river.

Last year, the most cited reasons for buying new property in London were investment (65%) and as accommodation for children during their university studies (33%). Only 2 percent of foreign buyers were buying a second home. However, experts noted that most investors are attracted by the favorable exchange rate of the pound (relative to the dollar and the euro), along with the high level of liquidity in new developments and the strong demand for flat rentals in Central London.

An important factor when deciding to buy domestic property is the accessibility of good schools and universities – both for the children of the owners and for renting out property nearby.