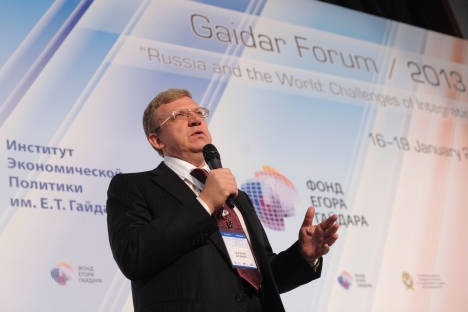 Alexei Kudrin, former finance minister, says at the Gaidar Forum that, in the absence of reform, Russian GDP will grow no more than 3.5-4 percent for the next 5-7 years and beyond. Source: RIA Novosti / Alexei Filippov

At the Gaidar Forum, which took place in the Russian Presidential Academy of National Economy and Public Administration in mid-January, participants discussed options for developing business relations. Prime Minister Dmitry Medvedev stressed the need for Russia to accelerate economic modernization and act as a link between the Pacific and the Atlantic.

The main topic of the Gaidar Forum – the first event of the year to convene representatives of government and business – was the integration of Russia. The acute question is which direction the country should look to develop business ties, and there is no consensus among Russian economists.

Ahead of the forum, one of its organizers, Vladimir Mau (head of the Academy of National Economy and a prominent liberal economist) said that he sees Russia's future in the context of closer integration with the EU, along the lines of Switzerland or Norway. This would be logical, given that 55-60 percent of Russia's foreign trade is with the region, he noted.

However, just as Europe fears dependence on one supplier of gas, Moscow sees problems in being dependent on a single customer. Europe's share of exports in recent years has been rapidly declining, and, in 2012, it dropped below the 50-percent mark for the first time (according to the Federal Customs Service).

Russia's largest single-country trading partner is now China. Its share increased from 5.2 percent in 2008 to 10.6 percent in the first 10 months of 2012. Next comes the Netherlands (explained by its status as the largest logistics hub in Europe), followed by Germany, Italy, Turkey, Japan, the U.S., Poland, South Korea, and France.

"Europe itself does not need integration with Russia," said director of the Institute of Globalization Problems, Mikhail Delyagin. He recalled that the EU faced problems integrating Poland and Hungary, as well as the fact that the integration of Turkey is no longer on the table.

Prime Minister Dmitry Medvedev was diplomatic, noting that Russia could become a key link in the global integration process and realize its geopolitical potential. "As I see it,” the prime minister said, "the notion of a single economic and humanitarian space from the Atlantic to the Pacific is advantageous."

"Russia's place is the same as before. It is a very wealthy exporter of natural resources," said managing director of Investkafe, Ivan Kabulaev. At the same time, he pointed to the fact that the country relies on external foreign investment and needs to create its own international financial center. "Depardieu is not enough," said Kabulaev.

Raw materials make up 80 percent of Russian exports. Consequently, any potential partner looking to increase consumption – particularly Asia – will be actively courted by Russia. This is evidenced by Russia's development of Eastern energy projects. Last year, the Eastern Siberia-Pacific Ocean pipeline pumped its millionth metric ton of oil; new deposits are being developed and major energy supply contracts are being signed.

Until the East catches up with the West in terms of Russia's foreign trade turnover, the Kremlin will continue to have sleepless nights over the impact that the Old World's recession is having on its economy.

Thanks to high oil prices, the budget remains more or less balanced (the deficit in 2012 amounted to just 0.02 percent of GDP, according to preliminary data), but the oil deficit rose to 10.6 percent of GDP. The collapse of oil prices in 2008 led to a 7.8 percent drop in GDP. At that time, though, the state was less burdened with social obligations – a result of the most recent election campaign.

Medvedev promised that the coming years would see Russia hit 5-percent annual growth. In this context, global growth will be one of the pillars of Russian policy within the framework of its G-20 presidency. However, independent experts doubt that the government will be able to pull the economy up by its bootstraps to such high levels.

For example, Alexei Kudrin, former finance minister and current head of the Committee of Civil Initiatives, says that, in the absence of reform, Russian GDP will grow no more than 3.5-4 percent for the next 5-7 years and beyond.

Deputy Minister of Economic Development Andrei Klepach is sure that the Russian economy can grow by 4-4.5 percent in 2013, but he also pointed to the need for "serious transformations." The "pipeline" economic model has exhausted itself, and economic growth of 1.5-2 percent is now the best that can be achieved, remarks senior analyst Vladislav Zhukovsky of Ricom-Trust Investment Company.