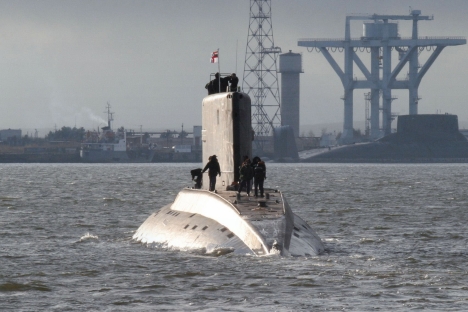 Russia’s military-industrial complex is increasing arms exports through Rosoboronexport, year after year, and the naval component is no exception. Source: ITAR-TASS

Russia’s military-industrial complex is increasing arms exports through Rosoboronexport, year after year, and the naval component is no exception. However, the latest contract for the supply of non-nuclear submarines is unique.

Rosoboronexport is in continued talks with Italy on the supply of S1000 submarines. However, these boats will not see action in either the Russian or the Italian navy. Instead, they will be sold exclusively to third-party countries.

Experts at the Rubin Central Design Bureau for Marine Engineering and Italy’s Fincantieri completed the conceptual design of the S1000 a few years ago. The submarine was always intended for third-party countries. The Italian shipbuilding company presented a mockup in 2008, at the 21st International Naval Defense and Maritime Exhibition and at the Conference Euronaval 2008.

According to Fincantieri Commercial Director Enrico Bonnetti, “the submarine’s architecture has been determined, equipment has been positioned, and an integrated combat system has been designed.”

The S1000 is 56-meters long, with an outside hard-hull diameter of 5.5 meters (18 feet), a submerged displacement of around 1100 tons, a maximum depth of more than 250 meters (820 feet), and a top underwater speed of more than 14 knots. The submarine can carry a crew of 16, plus six special operations troops.

The propulsion system includes two diesel generators, a battery, an electric motor and an AIP system with an electrochemical generator. Both Russian- and Italian-made equipment will be installed in equal amounts.

“Our key product in this global market segment is the Project 636 submarine, which is the current bestseller. But we are also promoting the new Amur-1500 submarine,” said Rosoboronexport head Anatoly Isaykin.

“This is not a replacement for Project 636; it is an entirely new submarine that we will be promoting in parallel with Project 636. The Amur-1500 will also be in demand from international buyers, as it will be offered in different versions — including a version with an air-independent propulsion system that is becoming increasingly popular in the naval market,” Isaykin said.

He added that sales of naval hardware through Rosoboronexport amounted to 20 percent of total military exports last year and were slightly higher than in 2011.

The Russian navy will soon receive Project 636 submarines, as well.

A keel-laying ceremony for a large diesel-electric Project 636.3 submarine named Stary Oskol was held at the end of last summer, at the Admiralty Shipyard. These submarines are now being built for the Russian navy, after being exported for 20 years.

This submarine is expected to get a version of the new Kalibr missile system (exported as the Club-S) with a range of 1,500 kilometers (932 miles). There is one hitch though: to use this missile complex, a new combat command and control system is needed; its flaws have become one of the reasons behind the delays in building and deploying the Lada-class submarines for Russia’s navy.

Project 636 submarines are armed with six torpedo launchers located in the bow; six torpedoes sit in shafts that are automatically reloaded after each launch. The torpedoes can be replaced with 24 mines, two in each launcher. Two torpedo launchers have been designed to fire high-precision, remotely controlled torpedoes. All launchers and their service systems can fire from both periscope and tactical operating depths.

The launchers can be reloaded within 15 seconds.

According to expert assessments, the submarine is low noise and “sees” better underwater than the most widespread American-made, Los Angeles-class submarines.