Business
Alexánder Panov
based on Interfax 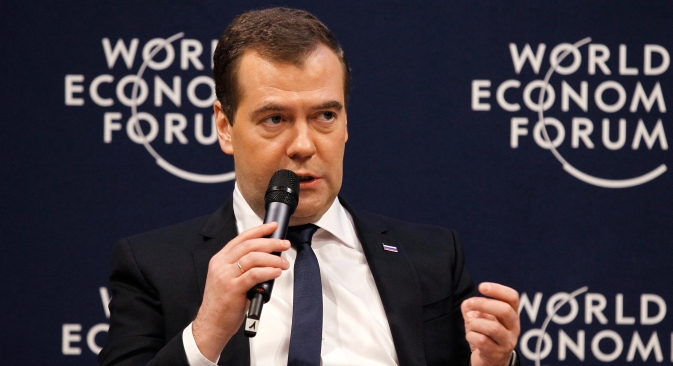 Russian Prime Minister Dmitry Medvedev addresses the problem of Russia's integration into the global economy at the 2013 World Economic Forum in Davos.

Russian Prime Minister Dmitry Medvedev made an appearance at the 2013 World Economic Forum in Davos to discuss Russia's economic future in a global perspective. In his speech to the Forum audience Medvedev discusses the need for an increase in competitive power for Russian companies and the recognition of the country's internal problems as top priorities in the roadmap to Russia's integration in the global system.

"The global economy remains unstable. The attempts to come out of the crisis without resolving the accumulated financial and regional imbalances have apparently failed. Despite all efforts, post-crisis settlement is still unstable, and the probability of crises and global recession occurring again is very high," Medvedev told during the 2013 World Economic Forum in Davos.

Medvedev reiterated that Russia's growing integration in global processes, including in connection with its accession to the WTO, "requires a considerable increase in the competitive power of Russian companies," both in terms of labor productivity and energy costs.

"The main risks are not external. The main restrictions are our internal restrictions. And the main threat is the slow progress in the solution of the said tasks," he said.

Medvedev described this forecast as "a powerful warning," but he added that he does not belive any of them will come true.

"All three scenarios are important and dear to us because they are negative," he said. "And that is a powerful warning. I would once again like to say that I am completely confident that not one of these scenarios will be realized."

Rather, a fourth development scenario will unfold in Russia, although its success will depend on the actions of the many agents involved, from Russian business to civil society, from the Russian people to "our friends that have gathered in this room today and are helping us create an effective government and build a modern economy."

In addition, the Russian Prime Minister commented on the Kremlin's plans for privatization. He announced that the Russian government is looking to make more revenue from privatization this year than it did in 2012.

"I hope we'll reach our targets and that we can earn even more this year than last year," Medvedev told Bloomberg TV.

"I'm speaking about the largest company Sovcomflot, the shipping company, the largest state bank, that's VTB. I also am speaking about other large assets. And of course we will continue to monitor the situation and make decisions depending on the markets," Medvedev said.

Medvedev also talked on the future gas company Gazprom. The Russian Prime Minister doesn't rule out the possibility that the gas monopoly exports might come to an end.

"I think if we do that, we should count all the implications of that," he said. "Potentially it is possible because currently we have other independent gas supplies, but we should not lose money, and that is the most important thing."

Addressing the conditions in which Gazprom operates on the European market, Medvedev said, "When Gazprom is under surveillance by several anti-monopoly structures, we are not against some procedures if they go alongside the law."

"But we don't think it is correct to have the position which the European institutions take on this so-called third energy package," he added. "The third energy package, even if it is for good and even if it is for reducing the price of gas and other fuel, it destroys the existing linkages both for our country as well as for Gazprom, it means the refusal to fulfill the earlier achieved agreements and to restructure the existing capabilities. We think that this destroys our agreements, and of course we will continue negotiations with our partners about this."

Medvedev also said a significant stake in Rosneft would be sold. He told Bloomberg TV that the state's involvement in the Russian economy was not growing, but would be scaled down, and that Rosneft was an example of this.

"The share of state participation in economy is going down. These are objective facts," Medvedev said. "The government is selling a part of the stake in Rosneft.  That is privatization. Where the government went to an asset, it sells another basic asset. So it is compensated. For example in Rosneft in this case and a huge stake will be sold."

Meanwhile, President and Chairman of Sberbank of Russia German Gref says that Russia's financial sector is much better than ratings show.

"Of course, these ratings do not reflect reality," he said at the World Economic Forum in Davos. "If it were so, then they would buy us. But last year Sberbank bought banks in difficult financial condition in more than ten countries."

"In reality we are better than they think of us," he said. "The gap [between the real state of affairs and place in the ratings] is at least sixty places, and that gap has to be eliminated," Gref said.

"Which scenario of the three [presented at the forum] is realistic? I hope none of them," he said, adding that not one of the three "can inspire business."