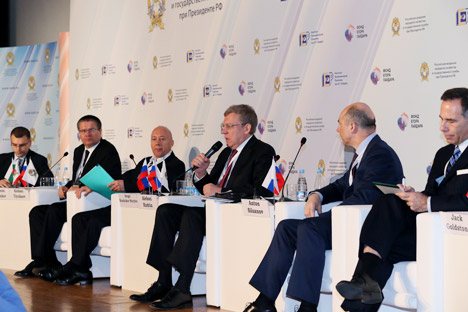 RBTH continues to publish follow-ups from the mid-January Gaidar Forum and most interesting quotes from the speakers who took the floor at the forum.

Kazakhstan may join the World Trade Organization (WTO) in 2013, according to WTO Director General Pascal Lamy.“Kazakhstan is at an advanced stage in its accession negotiations. My guess is that this might be doable this year,” Lamy told reporters on the sidelines of the Gaidar Forum. He added that Belarus was at a less advanced stage of accession talks, so it was hard to specify a time frame for its accession.

At the same time, Lamy noted that Russia, Belarus and Kazakhstan, being parties to the Customs Union, were supposed to operate within the framework of a single trade regime. Since Russia is already a WTO member, Kazakhstan and Belarus must de facto abide by many of the WTO rules.

The WTO chief did not assess the results of the first six months of Russia’s membership in the Organization, saying that it was premature to judge. “Russia is not so different from any other country that joined the WTO during the past decade,” he said. Lamy added that any new WTO member needs time to start running smoothly and meet all of the WTO rules and standards.

Head of the Federal Tax Service: Russia fights for taxpayers and Depardieu is an example of its success

Global competition among tax administrations has grown more intense over the last few years, and countries are fighting for taxpayers just as they are fighting for investors, said chief of the Federal Tax Service, Mikhail Mishustin, at a plenary session of the Gaidar Forum.

“Gerard Depardieu is a perfect example of a man who appreciated the predictability and transparency of the Russian tax system,” Mishustin told RIA Novosti, responding to a remark by the moderator of the session, Rusnano CEO Anatoly Chubais. The latter referred to the decision of the French actor as a “fantastic victory” for the Russian tax system in the global competition. More ...

Depardieu decided to renounce French citizenship after the French president announced plans to impose a 75 percent income tax on individuals making more than one million euros a year. The actor did not change his plans, even after the French authorities gave up on theirs.

The Federal Tax Service explained that Gerard Depardieu would only become a taxpayer in Russia if he chose to live in the country for more than 180 days per calendar year, or, if he registered a business in Russia.

“Gerard is an example of those people who not only discuss low tax rates but are also interested in the predictability and transparency of the Russian tax system,” Mishustin said. He also said that the number of people sharing this opinion was constantly growing.

According to the chief of the Federal Tax Service, Russia built up its tax system on the basis of international standards and the OECD model tax convention. “We feel confident when competing with other tax administrations in the world,” said Mishustin.

Participants in the Gaidar Forum suggested that the Russian minister for open government, Mikhail Abyzov, change the name of his team to the Ministry for Propaganda, since he called clarification of government decisions his main objective. Abyzov, however, did not find the joke amusing and reiterated that explanation of the government’s actions was his key task.

“Task number one for me and my team in 2013, together with the entire Cabinet, is to make the work of the Russian government comprehensible to regular citizens, in both the operation of administrative mechanisms and decisions taken by the government,” said Abyzov.

“If the operation of the government and its decisions are not understandable to the public, we won’t have a normal engagement with civil society; we won’t be able to make use of expert reports, because this is part of the information work that underlies this process,” Abyzov said. More ...

Commenting on the minister’s statement, Sberbank CEO Herman Gref suggested changing the name of Abyzov’s department to the “Ministry for Propaganda,” if that was what the minister wanted to be doing."

The minister went on to discuss transformations in Rusnano, which prompted its chief, Anatoly Chubais, to offer the minister his help in the propaganda efforts.

“The only thing that requires help is propaganda in your Ministry,” Chubais said.

The project for a new and essentially bicameral configuration of the government was put forward by Dmitry Medvedev in the fall of 2011, during his presidential term. The traditional Cabinet is supposed to be reinforced by an open government, which would include representatives of civil society. In May 2012, Abyzov was appointed minister for open government. The Ministry for Open Government is expected to become fully operational in 2013, when 3-5 pilot projects are scheduled to begin.

To promote the global competitiveness of the Russian economy, the country needs to address some non-economic challenges, OAO Rusnano CEO Anatoly Chubais stated at the Gaidar Forum on Jan. 17. These challenges include the development of its intellectual potential, eradication of corruption, and elimination of problems within the judicial system.

Despite positive macroeconomic parameters in Russia, “there are factors making this picture much less impressive,” said Chubais.

“What seems more important to me [than the positive macroeconomic figures] is the withdrawal of intellectual capital from the country — the competency drain. This is a critical indication that we are affected by some disease, that something is rotten,” Chubais said. More ...

According to the CEO, there is an obvious contradiction between the positive situation in the macroeconomic segment and the situation outside of it.

Chubais explained that, in order to build an innovative economy in Russia — the kind of economy on which the future of the entire country will depend — it was crucial to build on the accumulated intellectual capital. Furthermore, business fails to provide active support for the advancement of innovation, because it trips on non-economic factors, according to the Rusnano CEO.

Chubais noted that he was referring primarily to corruption and the defective judicial system in Russia: two problems that needed to be tackled.

Russia will not be able to expand its economy by 5 percent per annum without successful structural reforms in many sectors; without such reforms, it will not do better than 4 percent, said former Finance Minister Alexei Kudrin.

On Jan. 16, Prime Minister Dmitry Medvedev told the Gaidar Forum that the priority task for his government in the near term is to attain sustainable economic growth of at least 5 percent a year.

“Some of the moves we have been making lately prevent us from reaching this target… The estimated potential we have now, given the current factors, is 4 percent, unless we introduce major changes,” Kudrin told reporters on the sidelines of the Gaidar Forum. More ...

He reminded reporters that the Economic Development Ministry expected the national economy to grow at less than 5 percent over the next three years; more pessimistic forecasts give more discouraging figures, including 2 percent growth.

“If I understood the prime minister correctly, he said we should aim for 5 percent growth. This doesn’t mean, though, that we have grounds for planning this expansion. Such growth will only be possible if successful reforms are introduced in many sectors of the economy,” Kudrin said.

According to him, the average growth potential of the Russian economy is between 3.5 percent and 4 percent; this forecast applies to quite a long period of five to seven years. “It may last longer unless we change something; but, even if we launched reforms today, this potential wouldn’t grow substantially for the next five years,” the former minister said.

Senior deputy chairman of the Central Bank of Russia, Alexei Ulyukaev, believes a quarterly capital outflow within $10 billion to be an acceptable figure.

“I guess that a [quarterly] net capital outflow of less than $10 billion is acceptable for the current state of [financial and economic] institutions and the current account surplus,” Ulyukaev said at the Gaidar Forum.

According to Ulyukaev, a serious modification has been taking place in the process of cross-border capital movements in Russia, amid amendments to the macroeconomic policy and global trends. He mentioned three major factors that shaped this process. The first was the global financial crisis, which limited access for Russian companies and banks to foreign loans, thus encouraging capital outflow.

Also contributing to this process were the abolition of capital control and the gradual change to the floating rate of the rouble, which prevented effective carry trade and stopped Russia from attracting additional volumes of short money.

Ulyukayev reiterated that the net capital outflow indicator calculated by the Bank of Russia was made up of non-uniform components (direct investments, portfolio investments, cash flows into the money market), with various degrees of economic importance.

“Net capital outflow is a complex indicator, and we shouldn’t be using it to draw conclusions about regulation of economic policies. The only thing that matters is FDI flows and movements of ‘dubious investments,’” Ulyukaev said.

The state should change from supporting whole industries to backing separate businesses that make efforts to integrate into global production chains, Prime Minister Dmitry Medvedev said at the Gaidar Forum in Moscow.

“It is important to step beyond the framework of the industry-based approach that has developed in this country and is frequently advertised. We should target companies that integrate into international chains, and this may produce a more significant impact than offering across-the-board support,” Medvedev said.More ...

The prime minister believes that the time has come to speak about a new direction for Russia’s integration into the global economy — creation of a favorable environment for engagement of Russian companies in international value chains. “These include transfer of technologies, know-how and management practices,” said Medvedev. He added that the new approach called for a new vision of economic policy objectives, problems of the customs regime, tariff regulation, tax administration, infrastructure development and other processes.

Some Russian companies have already been incorporated into international production chains and are pursuing joint projects in association with foreign partners. These include Sukhoi, AvtoVAZ, VSMPO-AVISMA, and Vertolety Rossii.