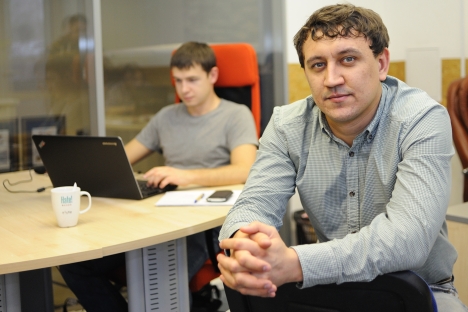 In 2007, Ilya Korobeinikov, a manager with the well-known Russian IT firm Softline, founded the Domosite.ru start-up. Source: Courtesy of Domosite.ru

An IT startup company founded in Yekaterinburg allows customers to not only communicate with their neighbors but also sort out utility issues and pay bills online.

For a long time, the Russian IT business had been most prominent in the country’s two capitals – Moscow and St. Petersburg. Lately, though, a surge of startup companies has been observed in a number of smaller cities, as well.

One example is Yekaterinburg. The city is home to such projects as online accounting platform SKB Kontur, which has gained nationwide acclaim among small and medium enterprises, Webinar, which is used by many companies for conferences, and Timeliner, a brand new online booking service for small businesses. Domosite, yet another web-based solution that came into being in Yekaterinburg, may well become this city’s new flagship startup company.

In 2007, Ilya Korobeinikov, a manager with the well-known Russian IT firm Softline, bought a flat in Yekaterinburg and realized that the people in his building did not communicate at all. As is often the case with large apartment buildings in Russia, the residents simply did not know each other and nobody maintained any contact.

Ilya started thinking about what he could do about this and was reminded of the web-design skills he had acquired at university. He used this as a basis for creating cocedi.net (from the Russian word for “neighbors”), a social network for residents of apartment blocks. And thus he started his own business.

As it turned out later, the aspiring entrepreneur had entered a promising niche market. Alexander Selegenev, executive director at TMT Investments, points to a number of traditional B2B companies that have been developing software in this market segment for years. According to Selegenev, Comfort (comfort.cf1.ru) and STACK (stack-it.ru) solutions are among some of the most interesting examples.

“Yet, the Russian market is far from being mature, which is even more evident, given that it is highly fragmented,” says Selegenev.

There were very few IT startup companies when cocedi.net first launched in Yekaterinburg. So Korobeinikov approached SKB Kontur in Yekaterinburg personally, piqued the company’s interest and persuaded it to invest in his project.

The new company appeared in January 2011; the website was renamed Domosite.ru and its concept was reinvented. Investors spent approximately 2 million rubles ($66,107) in six months on the website, connecting 3,000 houses in 20 Russian cities to the system. Residents were supposed to start forming communities, but only a few people from each block were willing to register.

That was not enough to solve the problems faced by residents. The concept was revised again. “We had two choices: to either introduce new services for residents, or address property management companies that might be interested in bringing clients to the website directly,” Korobeinikov says.

In the end, they chose the latter option. Domosite started offering various intermediary services for management companies – from sending email and text-message newsletters, to providing access to meter readings online. “As property managers pay us for the services, they are interested in attracting as many residents of the buildings they run as possible.

They do the promoting for us. This way we cover both bases by monetizing the service and engaging users,” says Korobeinikov.

Experts see the potential in this niche, but warn that it has its drawbacks.

“It is quite possible that housing companies and utilities may be more sluggish than IT people think. Domosite will have to go a long way connecting condominiums to its system and introducing new services in the meantime. Given that its headquarters are located in Yekaterinburg, the company is in a better position financially for the long run, compared to its Moscow counterparts,” says Andrei Kulikov, an investment analyst at Fastlane Ventures.

Nonetheless, it seems that Domosite’s founders were eager to expand when they started thinking about a second round of investment in October 2011. Negotiations with Runa Capital, however, showed that not everyone was so sure about the project’s prospects.

Back then, another company, Revdom, was operating within the same niche in Moscow, although it only provided online voting services for property managers and condominiums. Revdom founder Sergei Antipin explained that every management company has to coordinate its decisions with property owners during general meetings.

Russian legislation does not make any provisions for voting online, but Revdom developed a document exchange system that made online votes legally effective.

The consensus among experts was that Revdom had a sound marketing strategy, while Domosite employed a strong team of software developers.

So, when Runa Capital learned about Revdom, they offered to provide Domosite the financing it needed, on the condition that the two companies merge. Runa Capital co-founder Dmitry Chikhachev explains why such an investment decision was made:

“The housing and utilities business needs more IT services. That is why we believe there is a good opportunity for growth. There are an enormous number of processes involved in housing and utility companies, but they do it the old fashioned way – without any modern technology.”

In the end, Runa Capital invested $1.2 million in the joint project, with Antipin becoming the new company’s CEO and Korobeinikov its CTO. The programmers stayed in Yekaterinburg, while the main sales office and overall management functions were moved to Moscow.

It would seem that Domosite has a promising future. Its first investor was the owner of SKB Kontur, Leonid Volokov. He hopes that the value of the company will reach $100 million in the next two or three years. Alexander Selegenev points out that the project strives to combine those services that housing companies, utilities and property managers need most with elements of social networking and services for apartment residents.

“On the one hand, it helps the company stand out among its current competitors and build a customer base. On the other, it also delimits its market niche. Domosite may also face stiff competition from online portals promoted by local and regional governments, such as Dom Moskvy,” Selegenev says.

Ilya Korobeinkov says that, as of today, property managers and condominiums are the only source of income within the framework of the project. The average amount they pay depends on the company’s size and the service package it buys, ranging from 1,500 to 10,000 rubles ($50-330) per month. In the best case scenario, Domosite may break even this year.

It seems very likely that Korobeinikov will have to move to Moscow, where there will be many more tasks for him to do. “To be honest with you, I don’t want to do that because I don’t like Moscow,” Korobeinikov says. “Besides, the business environment in Yekaterinburg is just as good.”