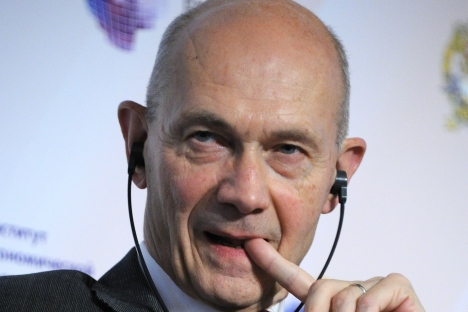 Pascal Lamy, director general of the WTO: “When Russia joined the WTO, it preserved many options for integrating into the world economy.” Source: Kommersant

The Gaidar Economic Forum at the beginning of the year turned out to be quite harsh, judging by the speeches and backstage remarks of the participants.

On the very first day of the Gaidar Economic Forum, the prime minister said that he was dissatisfied with the country’s economic growth. This was followed on the second day by the admission that, despite the long preparatory phase and extensive talks, Russia acceded to the WTO rather thoughtlessly.

“We are not aware of the rules that we have to abide by,” Sberbank CEO Herman Gref said at a plenary session. “Most of the ministers don’t really know what their mission is in the context of the WTO, to say nothing of the standards accepted in the Organization,” said Gref. The Sberbank CEO believes that Russia boasts a strong position in the global market only due to its export of raw materials, while all the other sectors are bringing in losses.

“When Russia joined the WTO, it preserved many options for integrating into the world economy,” said Pascal Lamy, the director general of the WTO in an attempt to comfort the Russian side.

“Russia has three essential components to integrate into the world economy: raw materials, human capital and finance," he added. "The question is how these three should be combined to withdraw from the old economic model and find your own competitive niche.”

Lamy was somewhat surprised to hear many Russian officials ask whether the country should follow the general rules of trade.

Lamy reminded forum participants that the years of long accession talks were over: the country became a full member of the Organization five months ago. Therefore, the question of whether or not Russia should abide by WTO norms was irrelevant, since Moscow must follow the general trade regulations. According to Lamy, Russia is not in a position to choose whether to conform to these rules or not, for it has no other choice but to comply.

At the same time, Viktor Khristenko, chairman of the board of the Eurasian Economic Commission, told the forum that, following the crisis, regionalization had become the leading global trend. Still, he assured Lamy that Russia was not asking itself whether it should meet its commitments to the WTO or not.

“The question is how we can benefit from our membership in the organization,” Khristenko said, adding that deeper integration with the CIS member states in the framework of the Customs Union and the Common Economic Area was among Russia’s priorities.

Meanwhile, from the side of Russian producers, there has been increasing criticism of the decision to accede to the WTO. President of the Russian Meat Union, Musheg Mamikonian, was the first to share his concerns. Mamikonian said the reduction in the import duty that is applied to ready-to-eat meat products (one of the conditions for Russia to join the WTO) could affect the competitiveness of most of the domestic meat producers.

The Russian Meat Union estimates the volume of the Russian market for processed meat, which falls into the category “ready-to-eat meat products,” at 550 billion rubles ($18 billion) annually. Therefore, the meat deal with the WTO will have a catastrophic impact on the Russian meat processing industry, which currently meets 95 percent of the domestic demand – more than ever before.

In late January, Russian tire producers also requested state support in connection with the country’s accession to the WTO, at a meeting organized by Russian Union of Industrialists and Entrepreneurs to address measures to back the tire industry. According to Trade House Kama, tire imports went up by 17 percent in 2012, while exports shrank by 3 percent. Experts predict market overstocking and a tougher competition in 2013.