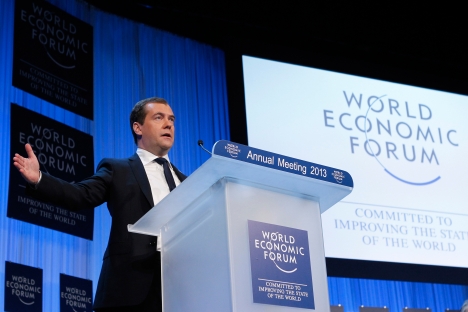 While experts agree that all three negative scenarios are unlikely to happen, some ask how Medvedev proposes to make Russian companies more competitive.

Russia will not follow any of the paths proposed by the World Economic Forum, Dmitry Medvedev told the Davos Forum. The “Russian Development Strategies” report, which was prepared by Davos experts for the panel discussion on the future of the Russian economy, envisaged three scenarios for the country’s development — all of them negative.

The first scenario assumes a slump in oil prices down to $60 per barrel. In this case, virtually all sectors of the economy would slow down and the country would end up with a single state-run oil company. Former Finance Minister Alexei Kudrin said that, in his opinion, this is an unlikely scenario.

A second scenario assumes a sharp rise in energy prices. In that case, the situation looks as though the country would only strengthen its positions.

However, high oil revenues would swell the ranks of the middle class, which, in time, would become the key political player contributing to certain political “changes” that would destabilize the internal situation in Russia. How this would happen in practice is not quite clear, as head of the Russian School of Economics, Sergei Guriyev, noted. He points out that there have been no precedents of this in history, which makes it difficult to predict how this scenario might unfold.

The third scenario assumes that oil prices would be slightly lower than today, but it also predicts that Russia’s regions will become stronger economically.

The country would gain some leading regions that will have learned to attract investments and, as a result, become virtually independent; this, too, would threaten the country’s integrity, however. Sberbank head German Gref believes that is an unlikely scenario, as well. “All the scenarios, including the last one, assume that the country itself does nothing,” said Gref.

Dmitry Medvedev, speaking after the presentation of the strategies, declared that Russia would not follow any of the proposed paths and would find a fourth, less pessimistic one instead. In fact, noted Medvedev, the country is already engaged in this. For example, some regions have already learned to attract investments and to work with capital at least as well as world leaders, and the economy is becoming less dependent on oil prices.

At the same time, Medvedev told the Davos Forum that the state was reducing its participation in the country’s economy. He insisted that the purchase of the company TNK-BP by Rosneft does not set a precedent, explaining that the merger was a forced measure. Moreover, considering that part of Rosneft will shortly be privatized, the claim that the state is increasing its share in the oil sector is dubious.

On the whole, Medvedev is certain that, in order to control the situation, it is enough for the state to have a block of shares. The key question for investors today is the Russian economy’s investment appeal, he stressed.

Prior to the last forum, Dmitry Medvedev had addressed the Davos Forum twice before. He first led the Russian delegation in 2007, when he was Vladimir Putin’s named successor. In 2011, he became the first Russian president to attend the forum, although he had to cut his program short due to the terrorist attack at Domodedovo Airport.

“It would be interesting to know how he proposes to make Russian companies more competitive. Putting myself in the place of a Western investor, what would I do? I would find a market and a sector that are developing steadily and the right enterprise before investing money in it,” says Stanislav Radkevich, who holds a doctorate degree in political science.

In addition to the strategies, the prime minister spoke about other initiatives and decisions. Two of his statements attracted particular attention among the participants.

First, the prime minister reaffirmed that he might run for president in 2018. However, he stressed that he would not compete against the current president, Vladimir Putin. On the other hand, Gleb Pavlovsky, head of the Effective Policy Fund, is sure that Medvedev will not have another go at the presidency. “His popularity is waning and, at the same time, there are clear signs that Putin mistrusts him,” says Pavlovsky.

The prime minister did not rule out that Gazprom might cease to be the sole gas exporter. Other serious players have appeared on the market. Experts believe he was referring primarily to NOVATEK.

Allowing NOVATEK to export gas independently would increase demand for Russian fuel, notes Vitaly Kryukov of IFD Kapital. In his opinion, Europeans are not averse to buying Russian gas; they support diversification of suppliers and an end to Gazprom’s monopoly. In the event of export liberalization, NOVATEK has a good chance of getting a foothold on this market.

In Kryukov’s opinion, dumping on the part of the independent company is unlikely, but Gazprom will have to learn to live with competition.