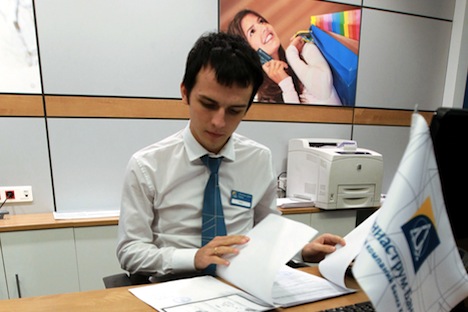 The employment market is growing at a moderate pace, and the trend looks likely to continue in 2013, experts say. Source: RIA Novosti / Vitaly Belousov

Russia is among the top 10 recruiting countries in the world, with mid-level managers being most in demand.

Russia continues to show strong demand for highly skilled workers, despite the global reduction (55 percent to 47 percent) in the recruitment of managers.

“Around 63 percent of businesses were looking to hire mid- and senior-level specialists in December 2012, and 62 percent are going to recruit in the first quarter of 2013,” an Antal Russia study says. Russia has thus made it onto the list of the world’s top 10 recruiting nations.

“The employment market is growing at a moderate pace, and the trend looks likely to continue in 2013,” says ANCOR strategic development director, Aleksei Mironov.

In 2012, most vacancies were in the consumer goods, retail and manufacturing, and IT and telecommunications sectors. Recruitment activity will remain high in these industries in 2013, provided the economy stays healthy.

“In 2013, many sectors will be looking to hire professional personnel, especially in manufacturing, the fuel and energy sector and the automotive industry,” Mironov says.

Competition in the employment market may grow stronger in 2013, now that Russia is part of the World Trade Organization; companies will be competing for professionals capable of taking their business to a new level.

Antal Russia believes that sales and marketing specialists will remain the most highly sought-after specialists in 2013.

“This year, about 60 percent of companies will be looking to recruit them,” the study says. About 25 percent of employers will seek supply chain managers and production staff, and 22 percent are short on accountants and tax specialists.

According to the study, the pharmaceutical, manufacturing and banking industries will be the most active sectors, in terms of recruitment.

Yury Virovets, president of the online recruiting company HeadHunter, shares some of Antal Russia’s expectations. Virovets believes that demand will grow for mid-level specialists in IT, finance and insurance, the automotive industry and private medicine.

“Health managers will naturally be more in demand, given the expansion of the private healthcare sector,” Virovets says.

Antal Russia analysts also comment that the marked reduction in job cuts indicates the stability of the employment market. In late 2012, 34 percent of companies reported job cuts, while only 28 percent are planning to make staff reductions in the first quarter of 2013.

Manufacturing companies are presenting negative expectations, though. According to Sergey Tsukhlo, head of the business surveys laboratory at the Gaidar Institute, 19 percent of companies expected staff reductions in the fourth quarter of 2012 (up from 13 percent in the first quarter of 2012), whereas, in 2013, the figure stands at 27-28 percent.

“At the same time, many companies reported shortages of workers in the fourth quarter of last year,” says Tsukhlo. “This means the manufacturing sector is short of workers, despite stagnation caused by the weak demand.”

Virovets points out that the demand for low-qualified staff is growing faster than the demand for managers. Furthermore, Tsukhlo believes that many companies inviting managers are unable to meet compensation requirements.

Companies will have to put more efforts in recruiting highly qualified staff in 2013 than in previous years, Mironov believes.

“In 2012, we saw a trend when qualified specialists were turning down quite lucrative offers and remained loyal to their current employers,” says Mironov. “The company makes a counteroffer to keep valuable assets: they offer new opportunities for professional development and better financial terms. This trend was not so evident in 2011.”

The current situation in the labor market is referred to as calm and stable.

“The staffing market grew about 20 percent in 2012, which is quite impressive, given the situation in the European markets,” Mironov says.