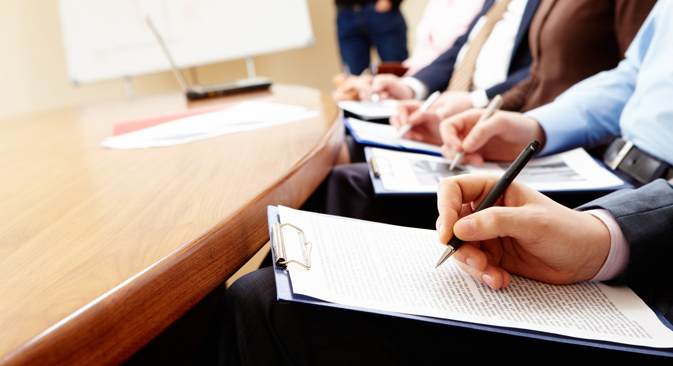 “Russia has all the requisite factors to become the business training hub for Eastern Europe,” says Sergei Myasoyedov, president of the Russian Association of Business Education. Source: PhotoXpress.

Experts suggest that Russia may become the global business education hub for Eastern Europe, along with Dubai for the Middle East and Berlin for Central Europe. The topic was discussed at the “BRICS Management Model and Challenge of Training Multifunctional Managers” roundtable discussion at the recent Gaidar Forum in Moscow.

Business education in the BRICS countries has substantially increased in the last 12 years. Back in 2000, BRICS accounted for only 8 percent of the GMAT exams taken around the world, but that figure has risen to 33 percent in 2012. China and India lead the way, accounting for 95 percent of all tests taken by BRICS residents.

Adizes Institute founder and president, Ichak Kalderon Adizes, believes that new training models are also necessary in developed nations. “Does the world – do the BRICS countries – require a new model of business education? Should we reinvent the wheel? We should if the old wheel is broken, and this is what we have now. Business schools teach us how to make decisions, but they fail to provide the toolkit to carry out these decisions,” says Adizes.

“Those who manage people but hate them are not managers, but tools to make money. We cannot turn a blind eye to social problems, because business education has a potential to address them,” he adds.

“The growth in business education in the BRICS states attests to the strong demand for manager training, which will inevitably result in new training formats and bring about new specialized centers,” says the dean of IE University (Spain), Santiago Iñiguez. He believes that existing training models in their current state are not suited to developing economies, noting that this could be a critical factor for the young BRICS economies and inexperienced managers. Iñiguez is sure developing economies require a different model that can be individually tailored for each economy.

“BRICS unites several countries whose economic indicators behave in a similar way. However, we should remember that these are different countries,” says Iñiguez. “China will benefit most from the adjusted U.S. model, while Russia should focus on the modified European model.”

Based on the Financial Times’ Global MBA ranking, there are several global business education hubs: London, Boston, Singapore, Madrid and Hong Kong. Iñiguez believes that Moscow, Berlin and Dubai will soon be added to this list. The Russian capital will become the “capital” of business education in Eastern Europe, Berlin will be responsible for Central Europe, and Dubai will become the education hub of the Middle East.

“Russia has all the requisite factors to become the business training hub for Eastern Europe,” says Sergei Myasoyedov, president of the Russian Association of Business Education. “If you look at media reports, you might be forgiven for thinking that the attitude towards Russia in Eastern Europe and the CIS is not really positive.

However, when it comes to business education, it is different. We are growing stronger, and the quality of Russian education is recognized internationally. Furthermore, Russia can offer many benefits to these countries that other states cannot. These include a common culture and similar languages, mentality and methods of business communication.”