New industry of household waste disposal to emerge in Russia 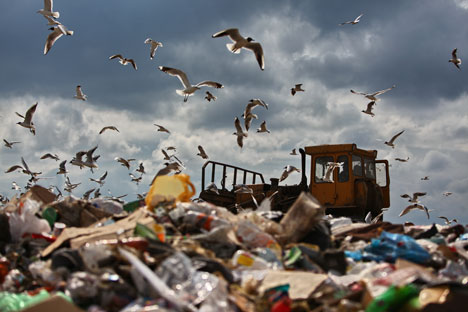 To get a national system of packaging, waste collection and recycling up and running, Russia needs to make recycling a priority over other forms of disposal and make waste separation mandatory. Source: Andrey Stenin / RIA Novosti

The latest version of the draft law on waste disposal has been hailed by the business community as the best that is realistically possible.

The State Duma will pass the second reading of amendments to the law on production and domestic waste in February 2013. The draft law has been pending since July 2011. In June 2012, the Ministry of Natural Resources introduced amendments to the second reading that impose tougher sanctions for littering. However, in the six months that followed, it softened its position: businesspeople have described the latest version of amendments as the most realistically feasible.

Producers and importers will have the choice of disposing of the waste from their production facilities or paying a contribution to a special fund. The latter would be an off-budget fund administered by the state, and the government would later determine the size of the contribution and the procedure for disbursing the fund’s assets.

Companies that opt for the first choice will have to sign a contract with an operator company or guarantee that they will solve the disposal problem themselves. In the latter case, they will have to set up waste collection centers, explain the procedure to residents, ensure the collection and disposal of waste and report to a supervisory agency.

“Disposal standards will be set for every type of production facility. If a company exceeds its annual quota, it may be given a lower quota the following year. The targets will grow gradually so that business will be spared a new ‘quasi-tax’, as if a universal contribution for waste disposal had been introduced,” says Aleksei Popovichev , managing director at Rusbrand.

The law will set requirements for specialized operators that will deal with disposal: they will have to present annual reports on their activities (small and medium-sized enterprises will have to make such reports once every three years). As of July 2014, membership in an industry self-regulating organization will become mandatory.

The draft law sets fairly tough requirements for members of these organizations, notes National Tare Union Vice President Pyotr Bobrovsky. They will have to pay at least 150,000 rubles (nearly $5,000) in dues to the compensation fund or present insurance to the tune of at least 1 million rubles. It will be difficult for small businesses to work in this sphere, and the number of small businesses there is considerable, Bobrovsky notes.

“Perhaps preferential terms for small business should be given,” says the union vice president. Russian companies are not yet ready to self-organize, believes the president of the Waste Recycling Association, Mikhail Malkov. “Unlike the construction business, where there are clear-cut requirements and standards, the legal framework here has yet to be created,” Malkov says, adding that “it will take time to adapt.”

“The size of the recycling market may reach 50 billion rubles,” a spokesperson for Rostekhnologii said. The state corporation, he revealed, has created a subsidiary enterprise called the National Ecological Operator to deal with such projects, together with Inekotekhnologii (a national alliance of enterprises that use and develop innovative ecological technologies).

“In effect, a new industry of waste handling will emerge,” Bobrovsky says. “This will generate new orders for science and industry, increase investments in the development of environmentally friendly types of containers and packaging, and the changes in legislation will provide an economic basis for the sector.”

“In any case, the load on business will increase with the new commitment, but many segments are dominated by international companies to which such obligations are nothing new,” says Bobrovsky.

“Recycling cardboard packaging is among the priorities of the ecological policy of Tetra Pak,” says the company’s spokesperson, Maksim Rakov. “The share of recycled waste is growing. During 2012, Tetra Pak’s partners in the disposal business have processed 13,000 tons of used packaging,” he says. Tetra Pak also cooperates with companies that use cardboard packaging as raw materials.

To get a national system of packaging, waste collection and recycling up and running, Russia needs to make recycling a priority over other forms of disposal and make waste separation mandatory; the number of enterprises handling waste should be comparable to the number of landfills. At present, according to the International Finance Corporation, an average landfill in Russia has an area of 10 hectares (24.7 acres) and between them they hold more than 30 billion tons of waste.