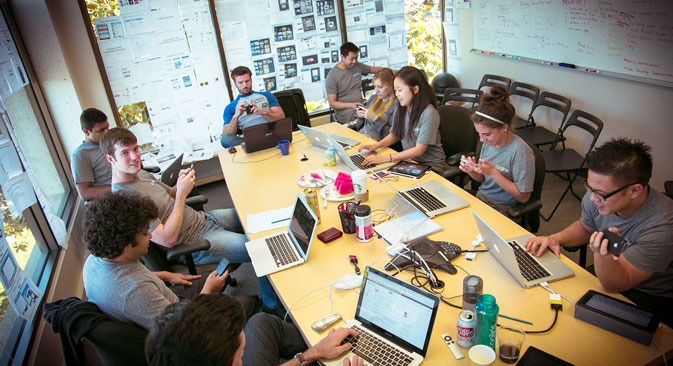 Cooliris is coming to Russia, which is one of the top 5 countries for the app. The Cooliris app features integration with Yandex.Fotki, a photo hosting service for the NASDAQ-listed Russian company Yandex. Source: Courtesy of Cooliris

A new version of the Cooliris app supports integration with Yandex.Fotki, providing online photo hosting for more than 10 million users.

In 2008, when Austin Shoemaker built the Cooliris browser plug-in, the startup passed quickly from desktop to mobile, focusing on iPad and iPhone apps and paying attention to collaboration with local services.

Austin Shoemaker was a master’s degree student in computer science at Stanford University, specializing in artificial intelligence before dropping out to lead technology and product development for the Cooliris platform. Prior to his involvement with Cooliris, Shoemaker worked at Apple Computer for seven years, contributing to product development efforts in several divisions.

Last month, Cooliris launched the first international version of the Cooliris app in China, partnering with the Chinese social network Renren. According to Soujanya Bhumkar, CEO and co-founder of Cooliris, “this has led to a 30x increase in downloads, boosting China to top 5 market for Cooliris.”

Now Cooliris is coming to Russia, which is one of the top 5 countries for the app. The Cooliris app features integration with Yandex.Fotki, a photo hosting service for the NASDAQ-listed Russian company Yandex.

In the new version of the app, Yandex.Fotki is integrated as a source that can be added directly to the home page; the list of other media sources for the app includes mobile library, Facebook, Instagram, Flickr, Google Images, Google Drive, Picasa, Twitter, Smugmug and Renren. Users can browse photos from various sources via the app’s easy-to-use Cooliris 3-D wall. Russian album titles and captions are also supported.

“What's great about sharing in Cooliris is that you can share photos from your various sources, including Yandex.Fotki, to Facebook, or you can share them in private groups with your close friends and family. You are in control of your privacy and your photos”, said Soujanya Bhumkar, CEO and co-founder of Cooliris.

Soujanya Bhumkar completed his MBA at the University of Chicago, after working in the consumer food industry with Pioneer Foods and Nestle. Soujanya has a master’s degree in Chemical Engineering and makes a special effort to stay extremely close to family and friends. Before Cooliris, Bhumkar worked on Vazu (messaging from desktops to mobile phones) and Tamarind (profitable company in the business of human performance evaluation) projects.

The updated version of Cooliris is already available in Apple's app stores.

RBTH: Why is Russian market so important to you?

Cooliris: Russia is one of our top 5 countries. Our value propositions resonate very clearly with Russian consumers, and therefore we see tremendous potential in the Russian market and a great fit for the Cooliris app. We’ve learned from our Russian users that they value their privacy very highly and tend to share very often in private Cooliris conversations.

RBTH: What is your business model?

Cooliris: We follow a freemium business model, and so we will always have a free element to our app. The paid features enable consumers to level up – to a premium service or a premium feature – and we will be launching these in 2013 itself.

RBTH: Do you have Russian collegues in your team?

Soujanya Bhumkar: “We’ve learned from our Russian users that they value their privacy very highly and tend to share very often in private Cooliris conversations.”

Cooliris: Our CTO Austin speaks Russian, and we are a very international team with people from Germany, Austria, Poland, Canada, Singapore, Taiwan, India, Pakistan and Brazil. We’re always looking for diverse and talented people from Russia. Email us at careers@cooliris.com.

RBTH: Which startup from RBTH rating seems the most interesting to you?

Cooliris: Displair. We can imagine users using our Cooliris app on their display system. Coupled with the multi-touch functionality, users will be able to scroll through their photos seamlessly over the display – it will be sort of like a "Minority Report" experience for retails, events, etc.  It’s a very interesting project.