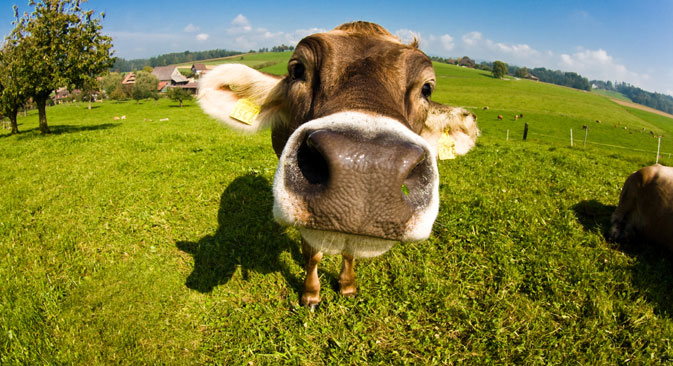 Starting Feb. 11, Rosselkhoznadzor will impose a temporary ban on the supply of these goods from the United States, which includes raw pork, beef and end products. Source: Shutterstock

Following a refusal of U.S. authorities to comply with Customs Union standards forbidding the import of meat containing the growth stimulant ractopamine, Russia has placed a temporary import ban on American beef and pork. Russian officials say the move is not an asymmetric response to the Magnitsky Act.

American farmers will again be unable to ship their meat to Russia. This time, the ban is not on chicken meat, but on pork and beef. Starting Feb. 11, Rosselkhoznadzor will impose a temporary ban on the supply of these goods from the United States, which includes raw pork, beef and end products.

Rosselkhoznadzor representatives say the ban was imposed because American meat was repeatedly found to contain traces of ractopamine — a growth stimulant that is banned in the Customs Union of Belarus, Kazakhstan and Russia. Back in November 2012, Russia warned the U.S., Canada, Mexico and Brazil that the use of this substance would not allow for further supply of those products to Customs Union states.

According to Rosselkhoznadzor spokesman Aleksei Alekseyenko, three countries agreed to change their production techniques for the Russian market, asking for time to make the appropriate arrangements. The U.S., however, ignored the demands and continued to supply meat containing ractopamine, urging Russia to drop the restrictions instead.

As a result, Russia decided to impose temporary restrictions on supplies of American pork and beef, as it spelled considerable losses for Russian importers: if Customs Union rules were violated, importers would have to either destroy these products or organize re-export to other countries at their own cost. “It makes no sense to go on doing the work for American vets. We see no point in spending budget money on this,” said Alekseyenko.

The Russian phytosanitary authorities deny suggestions that the new rules are an asymmetric response to the U.S. Senate’s replacement of the Jackson–Vanik amendment with the Magnitsky Act. Alekseyenko pointed out that the use of ractopamine is about pure economics. The substance increases animals’ muscle mass without having to increase their food ration and it may be a health hazard for humans who consume it. For example, ractopamine is not recommended for people with cardiovascular diseases.

“We presented our demand some time ago, before the Magnitsky Act came up for discussion in the U.S.,” Alekseyenko said, rejecting claims that the move violated the rules of the WTO, which Russia recently joined. The Rosselkhoznadzor spokesman noted that the European Union, China and other countries set the same requirements for meat. “We are under immense political pressure, but the problem is not being addressed, even though it is within the pay grade of experts and specialists,” said Alekseyenko.

Even without the new ban, the U.S. share in the Russian meat market has been shrinking. The reason for this is not only the growth of domestic poultry and pork production, but also the expansion of producers from Latin America and other countries in the Russian market. According to a National Meat Association report, in the first 11 months of 2012, imports of chilled beef from the U.S. accounted for just 2.8 percent of the total imports; frozen beef imports accounted for 7.7 percent, and pork, pork by-products and back fat accounted for 12.1 percent. Considering this, the position of the U.S. authorities raised eyebrows in the Russian business community.

“The U.S. has companies that produce meat without ractopamine and supply it to the European Union, China and other countries. It seems that the American authorities are politicizing the issue,” the Association’s spokesman, Sergei Yushin, said. He is sure that it will be a repeat of the Russian ban on the supply of poultry meat treated with agents containing chlorine: the U.S. ultimately had to fall in line with Russian requirements before shipments could be resumed.

Even so, experts expect a surge of imports into the Russian market over the next couple of weeks, before the ban comes into force. “Russian output is not big enough to meet the demand, and it is unable to increase output so quickly,” said Investcafe analyst Darya Pichugina. She believes the main beneficiaries will be Latin American producers, who will not only see their share of the Russian market increase, but who will also receive extra profit from the possible price rise.

Russian officials are sure that the niche will be filled quickly.

“The three countries that have accepted our terms – Brazil, Canada and Mexico – are ready to fill the gap that shortfalls of American supplies will cause. The Australians also sound upbeat, saying that they are ready to increase their supplies to the Russian market by 1.5 times,” said Alekseyenko.

Ordinary Russians, however, will have to survive a price hike, though experts are unable to predict how high it will be. “The hardest hit will be sausage producers, because they use cheap grades of meat supplied from the U.S. But I don’t think there are many such producers. The majority of them work with local farmers or are part of vertically integrating holdings,” said Pichugina.

On January 30, 2013, Rosselkhoznadzor deputy head Yeugeny Nepoklonov sent a letter to Ronald Jones, the assistant administrator for the Food Safety and Inspection Service Office of International Affairs of the United States, expressing regret that, in spite of repeated submissions by Rosselkhoznadzor, the American side has failed to offer guarantees that the products supplied to the Russian market do not contain the beta-adrenostimulator ractopamine. He described the restrictions on American imports as temporary, but the agency’s officials are saying privately that they do not know how long the ban will last. Officials stress that it can only be lifted after the U.S. provides guarantees that meat quality meets Russian standards.