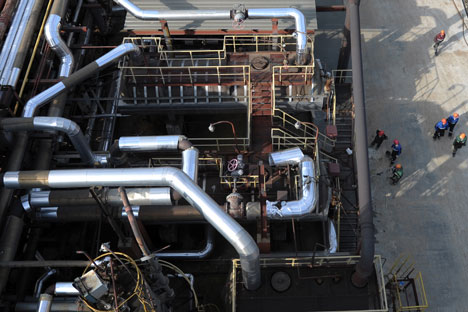 Macedonia and Bosnia are totally dependent on Gazprom, Bulgaria is 90 percent dependent, and Gazprom’s share of the Polish and Bulgarian markets is over 60 percent. Source: Grigory Sysoev / RIA Novosti

Izvestia’s source close to Gazprom says that, in 2013, the Russian gas monopoly has more modest price expectations for Europe. The company expects average gas prices to fall by almost 14 percent and sales to increase by 8 percent. Experts, however, doubt a rise in European demand as the region still shows no substantial growth.

Gazprom never officially discloses the prices at which it supplies gas to specific European countries. The European Commission has tried, so far without success, to get the European countries to disclose all the terms of their contracts with Gazprom. Data on the price of gas for foreign consumers surface occasionally, usually as during “gas conflicts” and “wars.” This happened to gas prices for Ukraine, for example. Last year, Ukraine was paying Gazprom $416–432 for 1,000 cubic meters (with the price growing during the year).

EU anti-trust inquiry of Gazprom should not hurt cooperation - Kremlin

According to Izvestia’ssource, the average price of gas for European countries at the end of the first six months of 2012 was $413.1. For five countries, the price exceeded $500. The highest prices were paid by Macedonia ($564.3 per 1,000 cubic meters), Poland ($525.5), Bosnia ($515.2), the Czech Republic ($503.1) and Bulgaria ($501.0). Gazprom sells gas to European countries under separate contracts, the price usually being pegged to the oil basket and fluctuating along with world oil prices with a time lag of about six months. The initial price in the contract is set on a case-by-case basis. Countries that have no alternative suppliers have to pay the most, says Vitaly Kryukov, an analyst with the IFD Kapital Group.

Macedonia and Bosnia are totally dependent on Gazprom, Bulgaria is 90 percent dependent, and Gazprom’s share of the Polish and Bulgarian markets is over 60 percent. The price also depends on the amount purchased: it is cheaper to deliver billions of cubic meters a year by pipeline than to transport small amounts, while the final price includes the cost of pumping the gas.

In the first half of 2012, the prices for some European countries reached their highest point since the crisis began. The average price for the Old World hovered around $500 in late 2008, when the market had not yet reacted to the start of the recession, says Kryukov. Now the highest price is on the Asian market ($630), but that is due to the spot market and the long distances.

Gazprom’s cheapest gas supplies go to Britain ($313.4 in January-June 2012). It is the most competitive market in Europe, with a large share of spot sales in which Gazprom’s share is a mere 10 percent, notes Dmitry Alexandrov, chief analyst with the Univer Kapital investment group. This year, the company expects a drop in sales to Britain to 7.7 billion cubic meters, compared to the initial forecast of 7.9 billion (8.2 billion in 2011).

Izvestia was told at Gazprom’s information directorate that it does not comment on contract prices.

Gazprom expects a significant price fall in Europe in 2013 to an average $360, compared to $413.1 in the first half of last year (the preliminary estimate of the price for the whole year is $386.7).  For some countries, the discount will be massive, down by about a quarter on the real prices in the first half of 2012. This applies to Switzerland, Denmark, Bulgaria, Poland, the Czech Republic, Bosnia and Slovenia. Greece, Europe’s main headache, is also likely to get a discount, though not such a big one. It paid $476.7 in 2012 and will pay $427.2 this year, according to the Gazprom forecast. Gazprom sales meet more than half of Greece’s needs for gas. The price will be the second highest after tiny Macedonia, which will pay $497.5.

Experts say with one voice that there are no objective reasons for cutting gas prices. On the European spot market, gas costs $342, which is close to rock bottom, notes Alexandrov. Oil prices are stable, so, on the basis of its forecast, Gazprom will grant discounts to individual countries, believes Kryukov. European states, which are more dependent on Gazprom than other countries are, are bargaining hard in the negotiations with the Russian giant. They have been resorting to threatening to take the matter to court; the anti-monopoly probes on the gas market initiated by the European Commission should not be discounted either. Moreover, Russia had to make concessions when negotiating the building of the South Stream gas pipeline.

Eventually, Gazprom had to agree to a series of major modifications to existing contracts in 2012. It announced in January 2012 that, “proceeding from market conditions,” it had adjusted gas prices in its contracts with GDF Suez (France), Wingas (Germany), SPP (Slovakia), Sinergie Italiane (Italy) and Econgas (Austria). The price was cut by about 10 percent. Italy’s Eni and Germany’s E.On negotiated cuts in March and July, respectively. In July and August, Gazprom adjusted prices for the Austrian Centrex and the Dutch GasTerra. In the second quarter of 2012, Gazprom had to retroactively pay back 54.6 billion rubles ($1.8 billion) as part of the price revision.

Increased gas purchases by Europe may also have had something to do with the drop in gas prices, Kryukov notes. An Izvestiasource close to Gazprom says the monopoly plans to increase supplies to Europe from 140.5 billion to 151.8 billion cubic meters in 2013 and to 209 billion cubic meters in 2015. The experts see no reason for such optimism, though. Europe’s economy is showing no signs of substantial growth, so the European consumers are unlikely to increase their demand by 30 percent, Alexandrov points out. More often than not, Gazprom’s expectations fall short of reality by 10 percent or more, as its forecasts are based on formal indicators, his colleague adds.