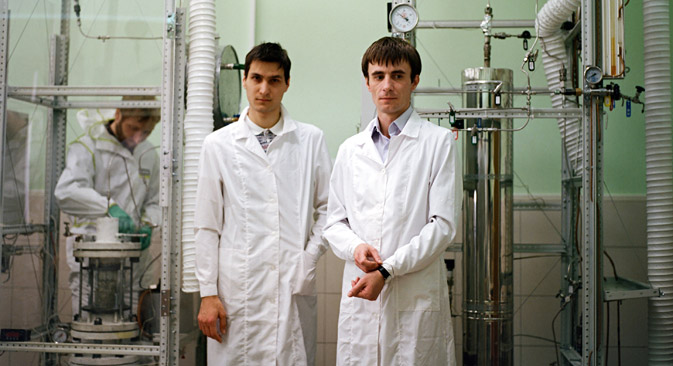 St. Petersburg startup Global RRT believes it can reduce the cost of gasoline production. The technology has already been bought by Indian Oil, which has offices in Russia, the U.S. and India.

"If these figures are true, that's pretty cool!" thought former vice president of TNK-BP and current owner of a consulting company, Douglas Harris, after glancing at a presentation from startup Global RRT that had ended up on his laptop. In the document, this young duo of Russian scientists proposed a method of saving around $0.06-0.09 per liter on the production of gasoline.

Having read the article through, Harris turned around in mid-air and, instead of Los Angeles, flew straight to Moscow. After meeting the founders of Global RRT, Oleg Parputs (33) and Oleg Giyazov (23), the top manager agreed to head their company.

Both graduates of the St. Petersburg State Institute of Technology, Parputs and Giyazov met four years ago at Lenkor Engineering — a firm that designed refineries for Chinese and Korean customers. In their spare time, the young scientists developed a theory that Parputs had proposed several years previously in his Ph.D. thesis. His theory postulates that the chemical processes required for isomerization (the extraction of gasoline components of Euro-4 class or above) can take place in just one column, and not six as in the case of modern industrial refineries.

"The method is currently applied in the manufacture of rubber, plastics, and polythene bags, but not gasoline," says Alexei Kameshkov, head of gasoline production at Kinef (one of the largest refineries in Russia).

In 2011, the two partners proved their theory mathematically. They took their model to the suits upstairs, but received a polite rejection, since the company was more interested in bringing existing capacities on stream than in developing new technologies. They then turned to venture capital funds, but the "angels of business" were very skeptical.

The only one to agree to invest was Foresight Ventures, which had previously only funded IT startups, making an exception on this occasion. Their $100,000 loan was spent on company registration and patents to protect the idea and develop technical documentation.

Six months later, news of the technology broke. The journal Chemical Engineering and Processing and other scientific publications printed several articles by Western researchers confirming the viability of the idea. Giyazov and Parputs' isomerization technology promised a new level of efficiency, reducing capital costs by a factor of 3.2 and outlays on energy resources fivefold. The huge saving in energy comes from redirecting heat released during the initial chemical reactions to other processes further down the chain, instead of allowing it to escape into the atmosphere. Sixty percent of the prime cost of gasoline is due to energy costs, explains Giyazov.

Expert confirmation opened up new horizons for the inventors in terms of funding. In summer 2011, on the back of investments worth 40 million rubles ($1.3 million), RRT became a resident of Skolkovo. The business then received a $1 million cash injection from Mikhail Abyzov, Russia's minister for open government who runs a venture capital fund. Abyzov was so impressed by the project that he invited the entrepreneurs to meet Russia's then president Dmitry Medvedev. Next, Global RRT became headed by Douglas Harris.

"Doug became a shareholder more out of interest," says Giyazov. "He's a business machine, a corporate tank, capable of crushing opponents at the negotiating table."

With feet now planted on solid ground, the partners took their development straight to Gazprom. After all, the only thing they lacked was a platform on which to implement and verify their theory. In the words of Parputs and Giyazov, Russia's largest company confirmed that Global RRT's technology would save $0.06-0.09 per liter of gasoline production; however, before pen was put to paper, there were other matters to be resolved. Talks with Rosneft were also drowned in bureaucracy. "After going to Rosneft, we realized that they [large companies] are too sluggish," says Parputs. "It took three months to draw up the minutes of the first meeting."

All the same, Medvedev had a role to play in the company's destiny. "We've still got a photo with him [Medvedev], it has an influence," says Parputs. In negotiations with foreign clients, the photograph is just as important as a bank guarantee, explains the entrepreneur. RRT's first customers were from India. The photo, of course, impressed them, but the deal came about by accident.In a move to take on more staff, the partners hired Indian engineer Adarsh Tripathi, who took the initiative and managed to arrange a meeting for his new employers with Razhagopalom Sunil.

This was a meeting with the vice president of Indian Oil — one of the largest companies in India. The negotiations were successful, and the Indian giant bought a license from RRT to use the technology and the accompanying documentation for $6 million.RRT's technologies sparked the interest of developing countries in the Pacific region, the Middle East, and Central Asia (namely Kazakhstan), notes Parputs. This broad geographical client base committed the company to expanding its own presence: in addition to its headquarters in St. Petersburg, RRT runs offices out of the U.S. and India.

After signing its first contract and appearing at several trade fairs, RRT received inquiries from Russian clients, too. In January 2013, Russia fully switched over to Euro-3 standard gasoline. Last year alone, oil companies spent approximately $6.3 billion on modernizing refineries. "And in 2014 the tax system will change: excise duty on gasoline below Euro-4 standard is set to rise," says Parputs. "Refinery owners face a choice: quit the business or take action."

The company recently signed contracts with two refineries in central Russia. It is more profitable to work with refineries (there are around 186 in Russia) than with state-owned oil companies, says Parputs. The formalities are fewer and the license fee is the same.

At present, the founders of RRT are completely immersed in their ongoing projects — contractual deadlines have been set for 2014. This spring, Douglas Harris, CEO of Global RRT, will summon Parputs and Giyazov to his office in the U.S. to report on the first results and, potentially, sign a new batch of contracts.