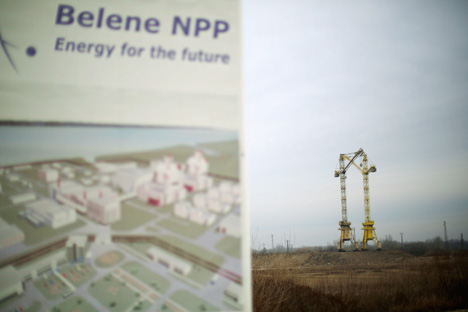 Cranes are seen in the background at the construction site of Bulgaria's second nuclear power plant in Belene, some 230 km (143 miles) north of Sofia. Source: REUTERS/Stoyan Nenov

In post-Fukushima Eastern Europe, the peaceful atom is winning the battle. In late January, a majority of Bulgarian respondents voted yes on a referendum to support construction of a new nuclear power plant. The ruling GERB party is against construction, but the opposition socialist party says the matter will be decided after upcoming parliamentary elections.

Eastern Europe is not ready to turn its back on nuclear power. On Jan. 27, Bulgaria held a national referendum on the initiative of the country’s socialist party (BSP), headed by former Prime Minister Sergei Stanishev. Bulgarians were asked a single question: “Do you support the development of nuclear power by means of constructing a new nuclear power plant?”

Initially, the question was more specific, referring to “[…] resuming construction of the Belene nuclear power plant,” whose 2006 construction bid was won by Russia’s Atomstroyexport. The Russian company managed to outpace the U.S. company Westinghouse.

The authorities substituted the original wording with more neutral language, however, and this move may have been somewhat misleading for the voters, according to sociologists. Bulgaria’s current prime minister, Boyko Borisov, called for his supporters from GERB party to vote against the construction, in line with his previous decision to close down the Belene project.

The referendum exceeded the minimum turnout threshold, as 21.8 percent of the country’s citizens cast their votes at the polling stations. Construction of the nuclear power plant was supported by 61 percent and opposed by 35 percent of voters. Now, as Bulgaria’s laws prescribe, the issue will be addressed by parliament.

“As regards the moral aspect, I cannot imagine someone who would dare to go against the will of almost a million people [Bulgaria’s total population is slightly more than 7 million]. Besides, the outcome of the referendum demonstrates that the Belene power plant issue will be raised again after the next elections,” says Tasko Ermenkov, an expert on Bulgaria’s energy industry and member of the referendum initiative group.

The results of the voting set a telling precedent for post-Fukushima Europe. The Bulgarian opposition now needs to hold on to its win, as the discussion that has been developing in the last few months largely concerns the pros and cons of the Belene project.

“Bulgaria will hold parliamentary elections in the summer of 2013. Election monitors believe the results of the referendum reflect the distribution of preferences between the BSP and the GERB. Clearly, the discussion is not yet over, as the project’s fate will be decided by those who win the parliamentary elections and form the government,” says Alexander Uvarov, an independent expert on nuclear power and owner of the Atominfo news site.

The stance adopted by Boyko Borisov and his supporters is currently based on just one argument: the plant will cost €10 billion ($13.5 billion), and the country’s budget does not have that much money. According to the prime minister, even if the people choose to continue with the project, the only way to obtain the requisite funds would be by taking them from pensioners.

“In 2010, Boyko Borisov set out a number of conditions that needed to be met in order to launch the Belene power plant project. The terms included the requirement of indicating the inflation-adjusted fixed price of the construction and the obligation for 51 percent of the project company’s shares to be held by the Bulgarian party, NEK. The government warned it would not allocate any funds out of the budget nor give any guarantees. The project was expected to be financed by European investors. All these conditions were met,” Rosatom spokesman Sergei Novikov says.

Back then, the French engineering company Altran Technologies and Finland’s Fortum Corporation joined the Belene project. Together with Rosatom, they garnered €6.3 billion ($8.5 billion) in investment and assumed all the inflation risks associated with construction of the power plant. NEK has retained the controlling stake in the company, while looking to paying its share out of future power generation revenues. All these agreements were explicitly stated in the memoranda that had been signed to establish the project company. Not a penny had been spent out of Bulgaria’s budget.

Nonetheless, Boyko Borisov decided to close the project down. He made this decision after a visit to the United States to visit then Secretary of the State Hillary Clinton in the spring of 2012. “The Czech Republic is currently witnessing another standoff over the Temelin power plant construction project between Skoda and Atomstroyexport on the one hand and Westinghouse on the other. Before Mrs. Clinton resigned, she visited our country, where she requested that Foreign Affairs Minister Karel Schwarzenberg hand the project over to the U.S. company. The Czechs took this as an insult. It is likely that Schwarzenberg lost the presidential elections this Saturday because of this straightforward support from Mrs. Clinton,” says Czech political analyst Ondřej Mrázek.