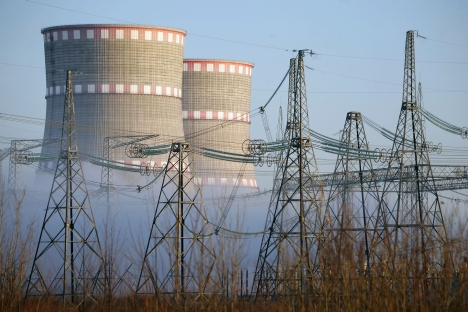 RBTH explores how far nuclear safety technology has come since the Fukushima disaster.

A non-operational nuclear power plant can still be a threat to the surrounding environment, as the recent accident at the Fukushima-1 reactor showed. Years after the famous disaster, an interruption in the electricity supply caused the cooling system – responsible for keeping the remaining nuclear fuel at a safe temperature – to malfunction. RBTH explores how far nuclear safety has come since the tragic tsunami.

Any engineer will admit that no technical device, however sophisticated, is completely free from the chance of an accident occurring. But in the case of nuclear reactors, replicating an emergency to prepare for a potential disaster is not only costly, but outright dangerous.

That’s why computer simulation and so-called integrated codes are critical. Ideally, they can re-create not only the ordinary workings of the plant’s safety systems, but also model complex accidents. Russian research leads the world in this field.

"[Integrated codes involve] mathematical models of real nuclear power plants that allow us to analyze critical points in the operational cycle," says Vladimir Ponomarev, Deputy Director of the Russian Academy of Science’s Institute for Safer Development of Nuclear Power. Since its founding in 1988, the Institute’s researchers have regularly performed safety analysis at various nuclear power plants around the world.

The International Atomic Energy Association (IAEA) recognizes its work on automated monitoring and control systems as the world’s best.

“Our results mirror similar research in Europe and the United States,” explains Ponomarev. “Together with the French Institute for Radiological Protection and Nuclear Safety we created the so-called MFPR code, which is in use globally for describing the retreat of fission particles from fuel.” Ponomarev’s Institute recently partnered with Skolkovo, Russia’s own “Silicon Valley” under construction outside Moscow, to try to commercialize its pricy safety codes on the global market.

“While writing an article about the Fukushima disaster, I unexpectedly got the idea for a smartphone that could measure radiation,” describes Vladimir Yelin, inventor of the DO-RA radiation dosimeter. “Inventors have a lot of great ideas, but often lack financing and management acumen.” In August 2011, however, Yelin found a partner at the Skolkovo Foundation, which granted him over $40 thousand to develop a prototype.

The DO-RA device, at a size of 57 mm. x 9 mm. x 11 mm, connects to any smartphone through the audio jack and operates via an application of the same name available in the Apple Store. It provides the user with an accurate reading of surrounding radiation every four seconds on the smartphone’s screen.

The device can be used to scan food and other objects for radiation, and includes preventative safety information in case of excessive exposure. The DO-RA has already grabbed the attention of Japan’s leading Honda Electronics.

Environmental pollution from spent nuclear fuel actually poses a greater theoretical risk than an actual meltdown, argues Ponomarev, citing Fukushima as an example. And regardless of emergencies (which, statistically, rarely occur), disposing of nuclear waste remains a hot political issue for any country utilizing the peaceful atom.

Raphael Arutyunyan, a colleague of Ponomarev’s at the Institute for Safer Development of Nuclear Power, believes the key lies not in burying the waste underground, but reusing it as nuclear fuel (so-called “fast neutron reactors”).

Currently, huge amounts of uranium and plutonium are buried in the Earth after being processed as nuclear fuel. But fast reactors will allow these materials to be re-used as additional nuclear fuel. One such reactor is already under operation at Beloyarsk in Russia’s Ural Mountains.

According to Arutyunyan, transferring all reactors to this technology is likely to take at least another 30 years. “A number of technical and safety issues remain, but I’m sure all of the obstacles will be overcome [for implementing fast reactors],” he says.