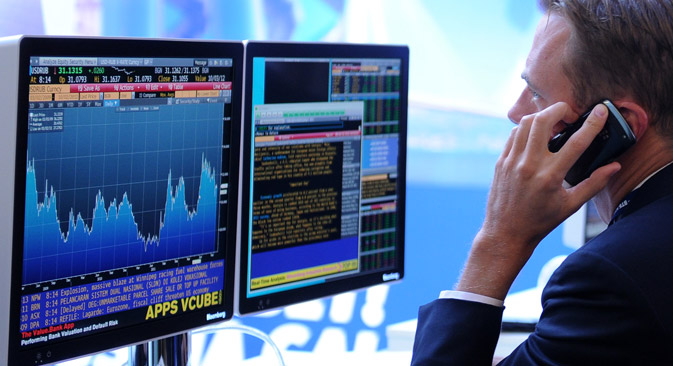 Russia is set to privatize three large-scale holdings in 2013, and Putin wants shares sold on the Russian market. Experts, however, believe privatizing state-owned companies via the Moscow Stock Exchange – as opposed to London or New York – is likely to make them less successful, due to weak infrastructure, low demand and a lack of investors.

The government is planning at least three large-scale privatization deals through public offerings for 2013: 10–25 percent of VTB, 7–14 percent of Alrosa and 25–50 percent of Sovkomflot.

“Privatization should benefit the development and help increase the capitalization of our own stock market, rather than heating up overseas financial venues,” Russian President Vladimir Putin recently said, thus ending the long debate on where it is better to sell shares of state-owned companies.

The privatization of VTB is likely to come first: according to Vedomosti, stricter capital adequacy requirements make it imperative for the bank to replenish equity in the first half of the year. VTB President Andrey Kostin said in early February that the state-owned bank was ready to “lead by example” and allocate the bulk of its privatized stake in Russia.

Since large deals must be spread out over time, the sales of Alrosa and Sovkomflot will likely follow in the second half of the year.

Experts are still on the fence about whether it makes sense to use a Russian stock exchange for equity placements. They believe Russia is still unprepared, compared to London or New York, to accommodate large placements, and this may impair the outcome of the offerings.

“Many institutional investors are expressing an interest in the upcoming privatization of VTB and Alrosa, but it’s far from certain that many of them will come to Moscow to buy those assets,” said James Friel, co-head of Rothschild in Russia and the CIS. Raising $300 million in Moscow “is certainly possible — just as it is possible to raise $500 million or $700 million,” an employee at a global investment bank told Vedomosti.

The problem is that many foreign investors — especially in America — know next to nothing about the Russian financial market, according to Link Capital partner Taras Vazhnov.

“Heads of major hedge funds with billions of dollars under management kept asking strange questions, such as, ‘Can Russian companies pay dividends to foreign shareholders?’ or ‘Do the Big Four auditors have a presence in Russia?” said Vazhnov.

Domestic problems are making Russian stock exchanges unpopular. One of the main problems is the lack of domestic long-term investors. As of late November 2012, some one million individual clients were registered at the Moscow Stock Exchange, of which only around 70,000 were “active” (performed more than one transaction monthly). To compare, the United States has around 90 million individual investors, China has 94 million and Brazil 20 million.

Russia also has few institutional investors that can make or break large equity placements. In Warsaw, for example, pension funds account for 90 percent of total demand. In New York and London, pension funds and insurance companies own more than 70 percent of exchange-traded shares there. In Russia, this number is below 10 percent.

“Why does the Russian government rely so heavily on foreign investors?” asked Yelena Loven, a portfolio manager with Swedbank Robur Rysslandsfond. “They will come if local pension funds are the first in line for a stake in the company; that’s how it happens in Warsaw and in other emerging markets.”

Russian pension funds are simply not allowed to invest in IPOs. A task force has been set up at the Ministry of Finance to draft amendments to the pension system legislation, which are to be submitted to the government by May. According to Finam AM President Vladislav Kochetkov, after deregulation, pension funds will be able to provide 20–30 percent of demand for Russian IPOs — even under a conservative strategy.

According to Kostin, there are no obstacles in principle to a VTB placement being held in Russia, but “the infrastructure should be put in place.” Two victories have been won in recent months, in terms of the necessary infrastructure required to attract foreign investors: a central depository has been established, and the European clearing systems Euroclear and Clearstream have been allowed to operate in the Russian market.

The Central Depository will open accounts in registers of 1,000 major issuers by Apr. 1, with others being added to the system through Nov. 6. It will also need to be recognized by the international community.

Euroclear opened an account in the Central Depository at the end of December, but has yet to activate it. It will only be able to use this account to operate in the fixed income market for now; access to the stock market will be granted next year. Without it, the privatization deals are likely to close at a discount.

“Many banks will start reviewing their restrictions on local Russian stocks once the Central Depository is fully operational; it will take several months to complete all the checks, so the process may take a long time,” said one investment bank employee. “If the privatizations happen before the infrastructure is upgraded, the amount to be raised could shrink noticeably, and we could lose many foreign investors,” an employee of an investment bank that arranged Sberbank’s SPO said.

The article is a combined report based on materials from Vedomosti.ru